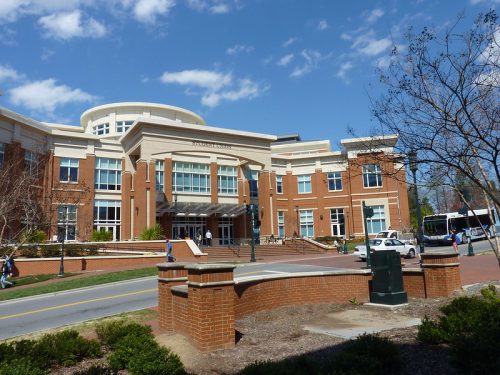 Universities may not target unpopular speech on campus often, but when they fail to protect it, the results are similar to officially silencing speech. A recent example of this lack of effort to protect comes from the University of North Carolina at Charlotte, where an anti-socialism display was destroyed on campus within a day after the Young Americans for Freedom campus group erected it.

I am the founding chairwoman of YAF at UNC Charlotte. I started this group to bring together students who are committed to free speech and the belief in a free marketplace of ideas. Our club hosts meetings with a diverse group of students whose political opinions are extremely varied. Our members share one thing in common, though: The belief in the power and importance of free speech.

Our theme for October was the debate over socialism and capitalism. After several discussion sessions in which we provided literature for and against both sides, and after hearing from several experts, our members decided they did not support socialism. Some of our members also realized that this opposition to socialism was not well-received on campus and in the classroom. Many of our members voiced that they were ostracized in class for anti-socialist sentiments, while others were reprimanded or suffered lower grades for supporting capitalism.

To publicly oppose socialism and show other students they weren’t alone in preferring capitalism, our club created a display of 21 cardboard tombstones, each representing a country with the number of lives lost in that country due to socialist ideologies. We spent a Wednesday afternoon creating the display, drawing, cutting, painting, and writing the statistics on each stone. This process took us over four hours, but we happily worked, knowing we were going to be educating our peers on an incredibly important issue.

We quickly realized that there was stronger disapproval for our conservative ideas when, the next day, we saw that someone had stolen every single tombstone we erected.

On Monday, October 14, our members met in front of the student union to erect our display. We were approached by several students who disagreed with us, but engaged in respectful dialogue, which we took as a good sign that our display would educate other students. Though several hostile students protested the premise of our anti-socialist display, most disagreement remained relatively calm.

However, we quickly realized that there was stronger disapproval for our conservative ideas when, the next day, we saw that someone had stolen every single tombstone we erected.

We immediately leapt into action, calling any university office that may have removed the display. The student organizations office said they had not been involved in the removal, but pointed us to the reservations office to ensure that the space we used had not been reserved for another organization. When I called, a woman at reservations said she believed she had heard someone discussing removing the display in her office, but she wasn’t sure and directed me to her superior.

Her superior informed me that, although the office had not removed the display, we had not had the reservation required for the display. I explained that we had attempted to get permission for a 9/11 memorial display in September, but did not hear back from the office, so we erected the display anyway. We believed we had the right to do so because UNC Charlotte is a free speech zone and we shouldn’t need permission to exercise our rights. Our 9/11 display was in the same spot as our anti-socialism display and stood for a week; college officials even praised the memorial. We assumed, after this precedent was set, that any display would be allowed to stand in that location. The woman from reservations told us that the school had not removed the display, but—because we did not have a reservation—they were not obligated to help us locate our stolen property.

After speaking with the reservations office, we spoke with facility management, which had not seen the display and did not remove it. Multiple calls to the surveillance office went unanswered for several days until we were told that the school does not have cameras outside the Student Union where our display was. Finally, we received a call from the assistant vice chancellor, who informed us that the university did not officially remove the display and could do very little to assist us in finding it or identifying who removed it. If we would rebuild it, though, the school would approve a reservation and have campus police watch the area to prevent another destruction of the display.

Our club initially believed that the school removed our display, but we now believe that disgruntled students did so. The school did not effectively protect the display, but is now attempting to do better. Our club is concerned, though, that the students who trampled on our right to free speech will go unpunished.

The goal is not to ruin a student’s life who trashed a political display they opposed. Rather, the goal is to ensure all students’ political views receive the same protections on UNC Charlotte’s campus. University leaders have an important responsibility to teach students how to debate ideas respectfully. Educating students about the American idea of free speech prepares them for a world where violating someone’s Constitutional rights has grave consequences. By responding that they cannot do much to help us, our administration is telling students that the correct response to speech that offends them is vandalism.

This failure to identify or reprimand the vandal sets a dangerous precedent: It may indicate that the university, though not officially stifling free speech, will allow students to compromise the free speech of others. Our display can be replaced, but a weak response to protecting free speech can have a chilling effect on unpopular opinions—whether of the political left or the political right.

Emma Schambach is a graduate student at UNCC studying to earn her master’s in communication studies and is currently working as an executive legal assistant at McIntosh Law Firm.
Editor’s Note: UNC Charlotte responded to this Martin Center article with a statement:

UNC Charlotte did not remove the Young Americans for Freedom (YAF) display on campus and University administration connected with the organization multiple times based on their concerns.

The University repeatedly inquired with numerous departments in efforts to determine who may have removed the display. UNC Charlotte Police examined video from various security cameras in the area. The video did not reveal individuals in view and officers were unable to discern who may have removed the display. YAF did not file a report with UNC Charlotte Police claiming theft of a display or damage to property.

YAF reinstalled their display several weeks later and UNC Charlotte Police went above and beyond standard practice to provide additional security support to ensure that the display remained in place and unharmed.

UNC Charlotte wholeheartedly supports free speech and expression protected by the First Amendment and is committed to cultivating an environment in which our students, faculty, and staff are empowered to express competing ideas. The University’s vision and values promise a robust intellectual environment that values social and cultural diversity and free expression.