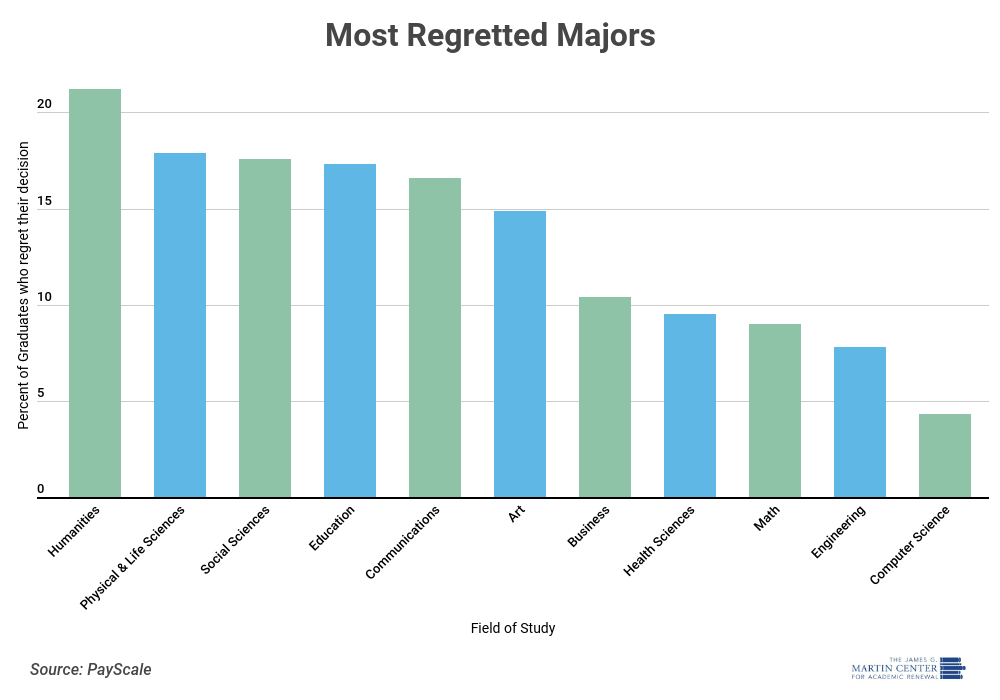 A recent report from Payscale showed that a majority of college graduates regretted their college decision. Out of the 250,000 students surveyed, about 12 percent had some regret the major they picked. The biggest regret, though, came from borrowing student loans. While that regret is consistent among generations, millenials are the first ones to regret their major in such large numbers.

The regret comes from economic struggles. Unsurprisingly, students most regretted studying the humanities, followed by physical and life science, social sciences, and education and communications.

Liz Freedman, a student employment coordinator at Butler University, reported that an estimated 20 percent to 50 percent of students come into college undecided about their major. She cites a study by Nancy Evans, Forney, Guido, Patton, and Renn that shows many students in their first year of college believe there is only one right choice for them and rely on others to help them make that choice such as advisors or professors. Students relying on others’ guidance have drawn no conclusions about themselves so picking a major that will be effective for them is very difficult. Some schools are moving in the right direction to help students find the correct major.  Duke and Notre Dame have implemented “First Year of Studies” programs which are aimed at helping first years explore all of their options.

Personally, I went through Notre Dame’s First Year of Studies program and it made me take a mixture of physical science, math, philosophy, social science, and literature courses.  Doing so made me realize I enjoyed the economics courses the most and that is my current major.  Exposing myself to a variety of courses let me explore all the options Notre Dame had to offer and I was able to make the best choice for myself. Universities who implement this sort of program could see that their students make better choices for their major and end up not regretting their major choice later in life.

Thomas Connor was a Martin Center intern. He is a junior at the University of Notre Dame studying economics and political science.