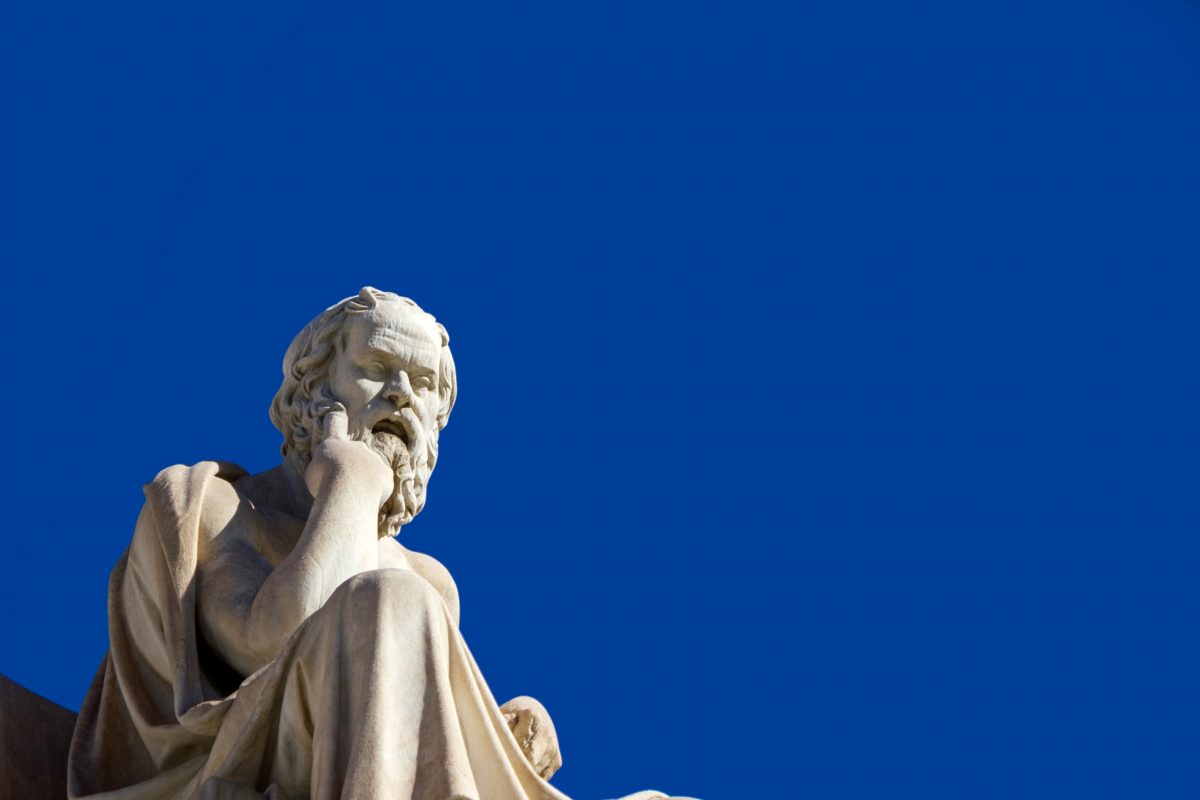 “I cannot teach anybody anything. I can only make them think.” —Socrates

Classical education—a tradition of education with ancient roots—is becoming an increasingly popular alternative to the current K-12 public education model. Its emphasis on reading the Great Books and making students active participants in their own education is appealing to parents and educators who seek not only to forms students’ minds but their characters as well.

One of the most notable hallmarks of classical education, in both secondary and postsecondary schools, is the use of the Socratic method. Named after the Greek philosopher Socrates, the Socratic method involves teachers posing questions to students, prompting them to think through what they know and deduce the most logical answer. It is distinct from the typical lecture model, where the student quietly takes notes as the teacher speaks.

The Socratic method is an effective tool for student learning, and it also embodies an ideal central to classical education’s mission: intellectual humility—an idea that was discussed at a recent meeting of classical educators in North Carolina.

On October 4th, educators from two K-12 education organizations, Thales Academy and the Institute for Classical Education, came together at the Regional Classical Symposium in an effort to “renew classical education for the next generation” in Rolesville, North Carolina.

The symposium’s overarching theme was “Reading as Soul-Formation: How Great Books Change Lives.” During the symposium, educators spoke about living the examined life, cultivating one’s “moral imagination,” and how words provide an understanding of objective reality.

The final talk of the day focused on ways teachers can use the Socratic method in their classrooms. The lecturer, professor Matthew Post of the University of Dallas, discussed Plato’s Republic and its famous Socratic dialogues. Post explained that a Socratic seminar is a guided, focused discussion. “You’re not being dictated to; you’re being invited into a conversation,” he said.

Although Post was speaking to an audience of classical educators, there are three main reasons why all teachers—at the K-12 and university levels—should incorporate the Socratic method into their teaching style.

First, the Socratic method fosters an attitude of intellectual humility in students. When an instructor poses questions like “What is the good?” or “What is wisdom?” to his or her students, it forces them to confront their own ignorance and recognize the need to deepen their understanding.

Secondly, the Socratic method encourages intellectual humility not only in students but in teachers also. This is because, by engaging in dialogue with their students, teachers are constantly being challenged to deepen their understanding of the subject matter—an idea that Post emphasized in his talk.

Post reminded teachers that they are “co-learners” with their students and that they aren’t simply imparting knowledge, but also learning with them. “That’s the center of who Socrates is: He wants to learn,” Post said. In a video interview about classical education, Post explained:

Socrates himself was a model of intellectual humility. Instead of considering himself an academic authority, he stated: “I know nothing except the fact of my ignorance.” In fact, he didn’t think of himself as a “teacher” because he didn’t believe that he gave students new information, but simply helped “draw out” of them what they already knew. That’s why he referred to his practice of conversing with students as his “art of midwifery:”

And the highest point of my art is the power to prove by every test whether the offspring of a young man’s thought is a false phantom or instinct with life and truth. I am so far like the midwife that I cannot myself give birth to wisdom…

Those who frequent my company at first appear, some of them, quite unintelligent, but, as we go further with our discussions, all who are favored by heaven make progress at a rate that seems surprising to others as well as to themselves, although it is clear that they have never learned anything from me. The many admirable truths they bring to birth have been discovered by themselves from within.

A third and final benefit of teaching via Socratic dialogue is that it can improve students’ ability to learn and retain information. That’s because Socratic discussion engages students in “active learning.” Active learning takes place when students participate in the learning process instead of passively absorbing information.

One of the strongest findings in the learning sciences is that recall and comprehension is greater if learners are frequently required to produce ideas rather than exclusively receiving information from an instructor or textbook.

And Post runs a classical teacher education program at the University of Dallas. The program’s primary focus is on educating teachers in the history and philosophy of classical education, as well as the most effective pedagogies for the modern classroom. The university offers a master’s program in classical education, a certificate program, and apprenticeships and practicum hours. One teacher said that the program gives teachers a “sense of purpose and renew[s] their commitment to the life of the mind.”

All teachers—and students—would undoubtedly benefit from the “sense of purpose and commitment to the life of the mind,” that a classical education provides and requires.

It’s clear: Modern cognitive research affirms truths about human nature that Socrates recognized years ago: “[E]ducation is the kindling of a flame, not the filling of a vessel.” He understood that education is not simply about giving students the “right answers,” but about compelling them to participate in the lifelong search for wisdom.