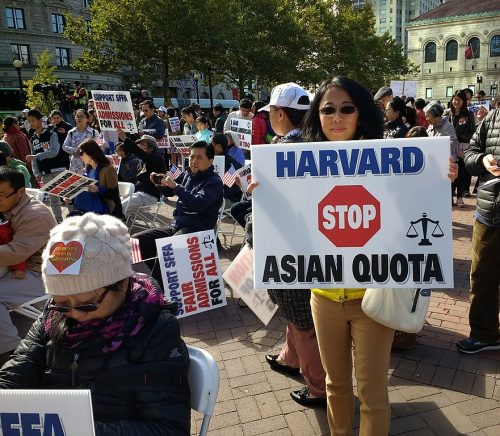 In a long-awaited decision, federal trial judge Allison Burroughs has ruled that, while Harvard does consider a student’s race in determining who gets in and who doesn’t (“the use of race in and of itself is admitted”), nonetheless Harvard is not breaking the law.

That outcome was not surprising, and the judge’s opinion is unlikely to change many minds or alter the case’s expected trajectory to the Supreme Court.

Judge Burroughs found that “Race is only intentionally considered as a positive attribute.” But if race is a positive attribute for favored groups, then does it not follow that it is a negative attribute for everyone else? Well, yes, she admits about 100 pages later, writing, “Race conscious admissions will always penalize to some extent groups that are not being advantaged by the process.” Sure, there is discrimination against Asian Americans, but it isn’t “undu[e]” or “disproportionate.”

I believe she’s wrong in concluding that our law permits group discrimination as long as it doesn’t hurt disfavored groups “unduly.” The Civil Rights Act in particular and the 14thAmendment weren’t written that way. But Harvard drew one of the judges who reads the Supreme Court’s dubious jurisprudence to conclude that they were.

So those who favor a colorblind society (including college admissions) will struggle on. The plaintiffs (Students for Fair Admissions) have already announced that they’ll appeal to the First Circuit. I’m ultimately hoping for a Supreme Court decision that racial discrimination in university admissions is not permissible, period.

With the overwhelming majority of Americans rejecting this unequal treatment (preferring E pluribus unum) and with a judiciary that is less and less hospitable to it (since, after all, the text of the civil rights laws prohibit schools from discriminating on the basis of race and ethnicity), and with this discrimination becoming more outdated in our increasingly multiethnic country—why should anyone expect the struggle to stop?

Defenders of racial preferences wax eloquent about the need to consider students “holistically,” the continuing role of race in our society, and the necessity of nuance and balancing in making difficult admission decisions. Certainly, there is a time and place for all that in our discourse—but there is also a time and a place for bright lines and clear rules. The rule of law, Justice Scalia famously titled one of his law review articles, is a law of rules. And there should be a clear rule here: No racial discrimination in university admissions.

Let me elaborate on the A-B-C, 1-2-3 point above. The approach the Supreme Court takes in Equal Protection Clause cases like this one is to say that racial discrimination triggers “strict scrutiny,” which means that it is allowed only if the discriminator has a really good reason for the racial discrimination (a “compelling interest”) and is using race no more than absolutely necessary in order to achieve that interest. That’s what “narrow tailoring” means.

Strict scrutiny is supposed to be a very hard standard and judges are supposed to examine claims by discriminatory institutions rigorously to see if they really are truly compelling, not mere pretexts for favoring some and disfavoring others.

In college admissions cases, the Supreme Court has ruled that there are educational benefits from having “diversity” in its student body that can be the “compelling interest” to justify racial preferences. This means that a case like Harvard’s hinges on whether the school’s use of race is “narrowly tailored.” That is to say, the question is whether it might have achieved diversity in some other way without using overt racial preferences, whether race was used too mechanically (i.e., via quotas or some sort of points system), whether the school periodically reassesses its use of race, and so forth.

My point is that, so long as the door is left open for schools to consider race if it is “narrowly tailored,” many schools will assert that they meet those requirements, no matter how stringent they may appear on their face to be. They will hire experts, and create committees, and manufacture whatever paper trail they have to in the hopes that, if they are sued, they will prevail—with the help of a well-disposed judge.

The only way, then, that the practice of racial preferences will stop is if the Supreme Court revisits its decision to recognize the “diversity” justification as “compelling” in its 2003 Grutter v. Bollinger ruling.

That’s not such a heavy lift, really.

Is it really plausible that the “educational benefits” enjoyed by white and Asian American students in random conversations they have (in or outside the classroom) with black and Latino students are so valuable—and impossible to achieve in any other way—that they justify the long list of costs of racial discrimination?

The answer is clearly no.

I’ll also note a good point that Gail Heriot, a law professor at the University of San Diego law school and one of the two sane members of the U.S. Commission on Civil Rights, recently made; namely, that it’s hard to see how a court can find a compelling interest in racial discrimination when a strong majority of the country rejects it.

I’ll note too that this unpopularity does not seem to matter much to many admissions offices; a recent study by the Center for Equal Opportunity found that all five of the Virginia public universities for which it had obtained admissions data discriminated against Asian Americans, just as Harvard does.

When the Harvard case finally does reach the Supreme Court, as is very likely, let us hope that it reconsiders—employing truly strict scrutiny—whether or not “diversity” is a “compelling interest” at all.

So long as the door is left open for schools to consider race if it is ‘narrowly tailored,’ many schools will assert that they meet those requirements, no matter how stringent they may appear on their face to be.

That means the justices should explore how plausible it is that university admissions officials can, with great confidence, by considering skin color and national origin, identify students who will, in random discussions inside and outside the classroom, provide white students and Asian American students with insights that are “compelling” in their “educational benefit.”

And, what’s more, those insights could not be attained in any way except (a) by these random discussions and (b) by university officials using racial discrimination in the admissions process to ensure that such students will be admitted to make them. That’s what the diversity rationale boils down to, and so what’s the evidence of this?

It’s hard to swallow that anyone really believes such nonsense. Whenever I debate this issue, within a few minutes we’re talking instead about slavery. And it’s always useful to put the shoe on the other foot in these debates: Suppose someone were to try to justify discriminating against blacks and Latinos based on this sort of social science—would it be viewed as plausible, let alone “compelling?”

Can we hope that the Harvard case will lead to a reversal of Grutter?

When the issue of racial preferences was last before the Supreme Court in the 2016 Fisher II decision, a 4-3 Supreme Court upheld such discrimination by the University of Texas. Justice Scalia had died during the term and his vacancy had not yet been filled; Justice Kagan had been recused because she had participated in the Obama administration’s decisionmaking about the case in the lower courts when she was solicitor general.  Disappointingly, Justice Kennedy joined the three remaining liberals, leaving Chief Justice Roberts and Justices Thomas and Alito to dissent.

With Justice Kennedy’s retirement and the appointments of Justices Gorsuch and Kavanaugh, a 5-4 decision the other way is a realistic hope.

Roger Clegg is general counsel of the Center for Equal Opportunity.