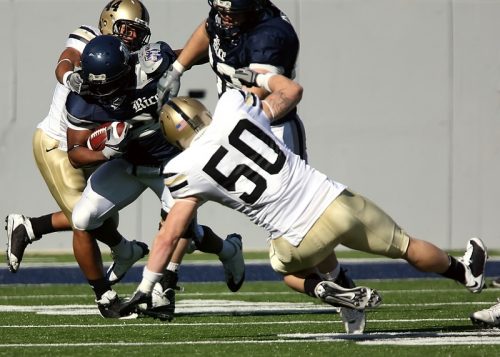 Fans in the Carolinas are crazy about college sports. Six schools in the Carolinas boast membership in the “Power Five” Atlantic Coast or Southeastern Conferences, and they often perform quite well. On the gridiron, Clemson has three national titles to its credit, including two in the last three years over perennial power Alabama.

When it comes to men’s basketball, North Carolina and Duke hold bragging rights. The UNC Tarheels and Duke Blue Devils have more total appearances in the final Associated Press poll than any team in the country, save Kentucky. Both universities have finished in the Top 10 for four of the last five years.

Of course, this kind of success doesn’t come cheap. Money matters, and quite a lot.

In 2017, Clemson spent over $46 million, or 42 percent of its $110 million athletic budget, on football. Duke led the way in men’s basketball spending nearly $21 million, or over 19 percent of its $109 million athletic budget, on its most-acclaimed sport. The other “big players” are “big spenders” too. South Carolina tops the major competitors in the Carolinas, spending a whopping $140 million, while Wake Forest spends the least at about $71 million. North Carolina and North Carolina State fit in the middle at approximately $97 million and $87 million, respectively.

Those are large numbers. What do they tell us about athletic spending? And what about other schools in the Carolinas, from up-and-coming powers like Appalachian State to small schools such as Winston-Salem State or Erskine?

Why does athletic spending matter?

We set out to investigate these questions, and our findings, recently published in the journal Political Economy in the Carolinas, tell us that the aggregate figures don’t reveal that much. Understanding the costs of collegiate athletics is more complicated than it may first appear.

To start, total budget figures, like many large sums, hide more than they reveal. To gain a better understanding of how much schools in the Tarheel and Palmetto states spend on athletics, we scale the total amounts by the number of students. We recognize, too, that because private schools generally have higher tuition than public schools, the value of their athletic scholarships inflates their total cost figures.

Two other factors are also critical. First, the NCAA division is a primary driver of costs: Division III and Division II athletic teams are much less expensive to fund than are Division I teams. Second, the costs of athletics almost always increase over time. An athletic program that looks affordable this year may not be affordable next year.

We used data on athletic costs from the U.S. Department of Education, collected under the Equity in Athletics Disclosure Act, that span from 2003 to 2016. The data set was complete for 63 schools in the Carolinas over these years. The following charts shed light on how much schools spend, on a per-student basis, and how this spending varies by type of institution, NCAA division, and over time. 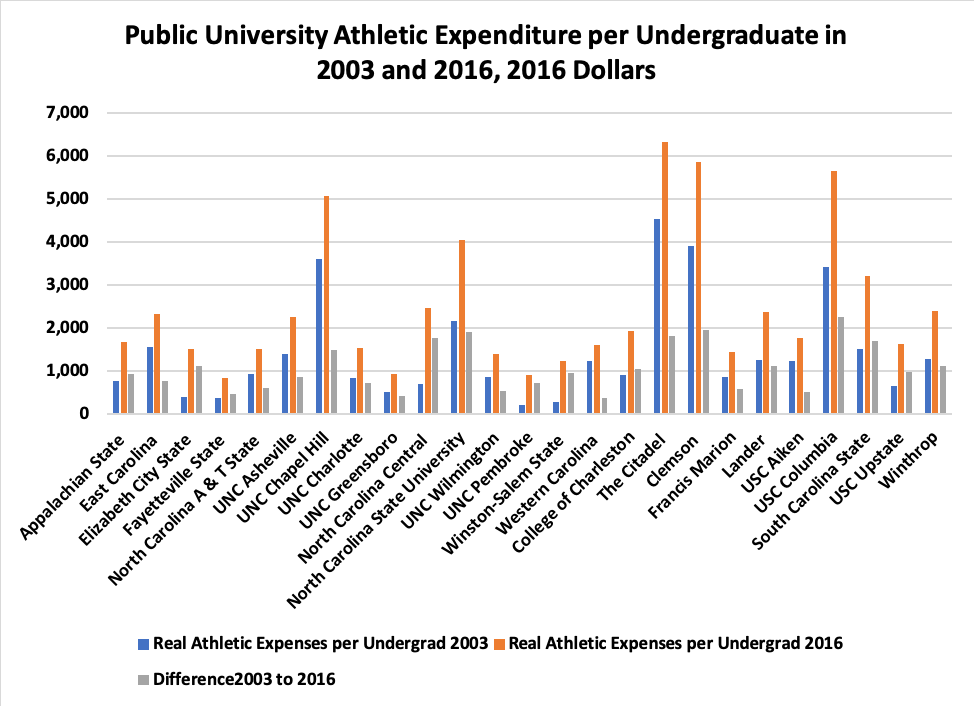 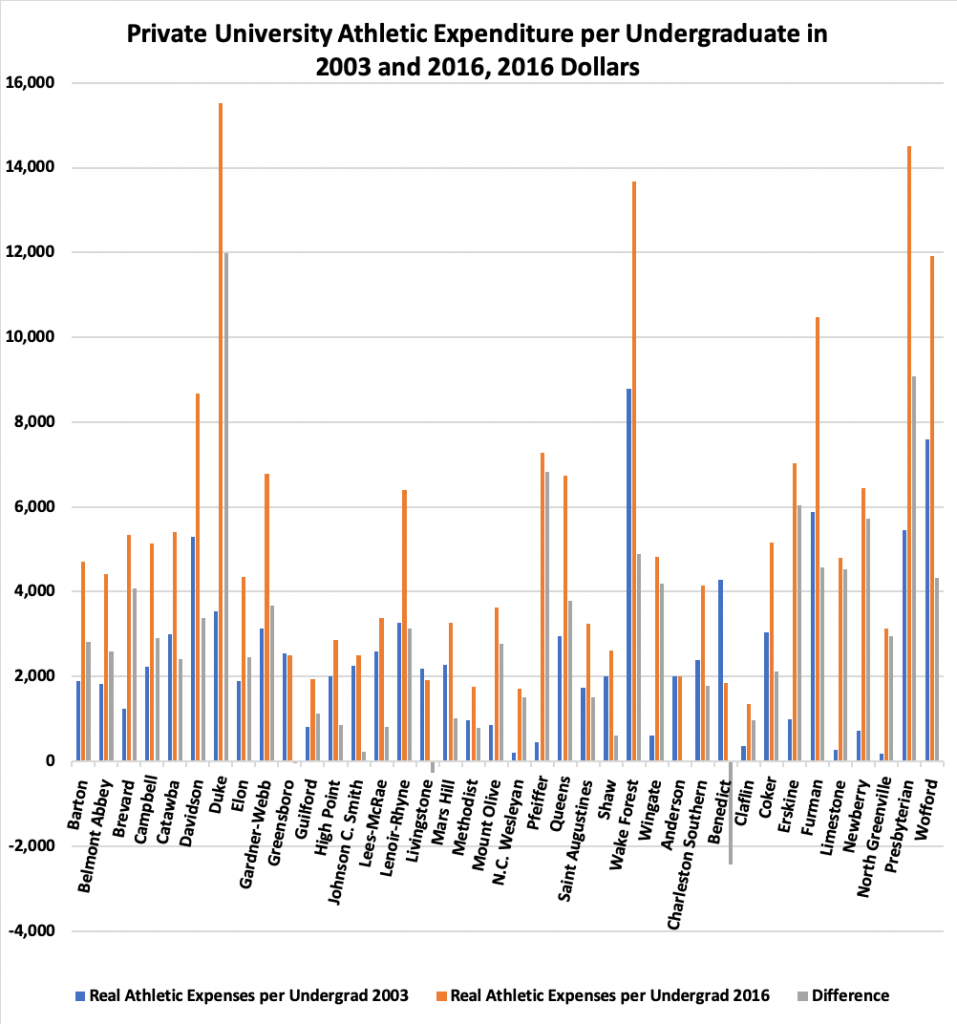 The members of the ACC and SEC stand out. UNC-Chapel Hill, NC State, Clemson, USC-Columbia, Duke, and Wake Forest spend a lot, even on a per-student basis. Their big spending is well-rewarded, however. Those are the same schools that reap huge sums from FBS bowl games, the men’s “March Madness” basketball tournament, television contracts, and gate receipts.

According to USA Today, which obtains data only on state schools, the USC-Columbia athletic department does not receive any revenue from student fees, direct or indirect institutional support, or state money. Athletic departments at Clemson, UNC-Chapel Hill, and NC State receive some revenues from these sources, but in Clemson’s case, the amount is less than 5 percent of athletic revenues, and for UNC-Chapel Hill and NC State, the figure is less than 9 percent.

What stands out are several of the small schools. They play at the FCS level but spend like they are members of a Power Five conference.

Among the publics, The Citadel spends more per student than Clemson, USC-Columbia, UNC-Chapel Hill, or NC State, while having more than 60 percent of its athletic revenues funded from the broader institutional budget. Among the privates, Furman, Presbyterian, and Wofford spend as heavily as Duke and Wake Forest.

Of perhaps equal import, our analysis shows an unabated upward trend in per-student spending on athletics. As our figures show, the jump from 2003 to 2016 is substantial, more than doubling in inflation-adjusted dollars for 29 of the 63 schools we examined. Only three private colleges— Benedict, Greensboro, and Livingston—bucked the trend, managing to decrease per-student spending on athletics.

Those high and rising costs have not been a deterrent to a number of schools in the Carolinas that have upscaled their NCAA division during our sample period:

In every case, athletic costs increased. Winston-Salem State is the lone exception, returning to Division II after a brief stint at Division I FCS.

The reason all this matters is that dollars have alternative uses. The dollars spent on athletics could be used to reduce student fees to students facing financial challenges. According to The Institute for College Access and Success, nearly 60 percent of college graduates in the Carolinas incur student debt that averages over $26,000 for students in North Carolina and nearly $31,000 for students in South Carolina. Imagine the impact if the resources devoted to athletics were diverted to reducing charges to students and shaving even a few thousand dollars off their debt burdens.

For the universities that are in the ACC or SEC, spending big on athletics at least appears to make sense. They generate revenues to largely or completely offset these expenditures. But for small schools outside of the Power Five conferences, spending big on athletics is not only senseless but arguably harmful for the students these institutions are supposed to serve.

It is time for university administrators, trustees, state legislators, college students, and parents to question spending on collegiate athletics. That’s especially true for small schools with athletic programs that spend thousands of dollars per student but earn little revenue to offset these expenses.

Curbing athletic expenditures does not mean foregoing the benefits of hard work, discipline, and teamwork that athletics can provide. Those virtues can be obtained with relatively inexpensive Division III athletics, or much cheaper club sports.

For many institutions, withdrawing from the NCAA rat race would be not only financially prudent but also equitable for their students who often pay for their education with borrowed funds. Failure to do so is irresponsible financially, and, from our perspective, a violation of the primary mission educational institutions are supposed to serve.

Jody W. Lipford is a professor of economics at Presbyterian College.

Jerry K. Slice is a professor of economics at Presbyterian College.