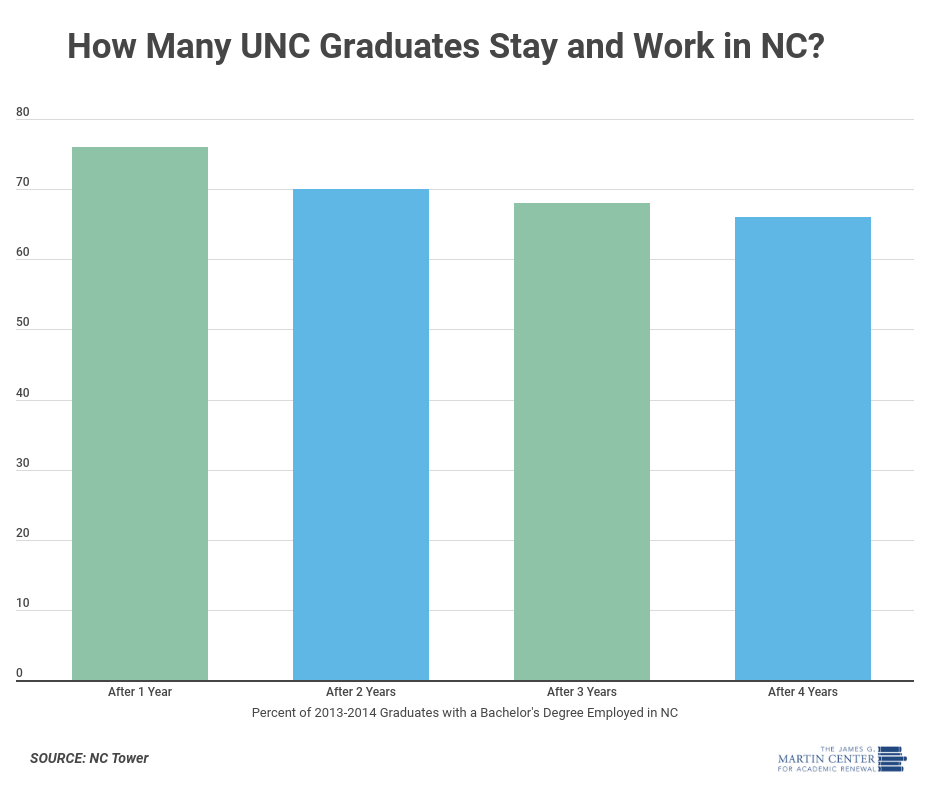 Editor’s note: A previous version of this article incorrectly reported the percentage of in-state freshmen at UNC-Chapel Hill. The correct figure is 82 percent.

For a lot of students in the University of North Carolina system, North Carolina is the place they call home well before they begin college. In 2018, roughly 82 percent of UNC-Chapel Hill freshmen were in-state students. That comes as no surprise—usually, students attend college in the state where they grew up or attended high school.

It’s not surprising either that, after earning a bachelor’s degree, nearly 80 percent of UNC graduates remain in North Carolina. Students make connections with professors and local employers, making it easier to get an in-state job.

Even after getting work experience for a few years, most graduates stay in-state. Four years after 2013-2014 UNC system students graduated, for instance, 66 percent of them remain in North Carolina.

Other college-educated adults also come to the Tar Heel state. Raleigh, in particular, is one of the biggest metro areas in the country for millennial college graduates—47 percent of its millennial population have a degree.

As the Research Triangle Park continues to be a hub for innovation, it’s likely the number of college graduates in the area will continue to increase. If the current trend holds, many of those graduates will come from our very own public universities.

Madeline Baker worked as a research intern at the Martin Center in summer 2019. She is pursuing a bachelor of science in International Economics and Finance with a minor in Spanish at Catholic University in Washington, D.C.