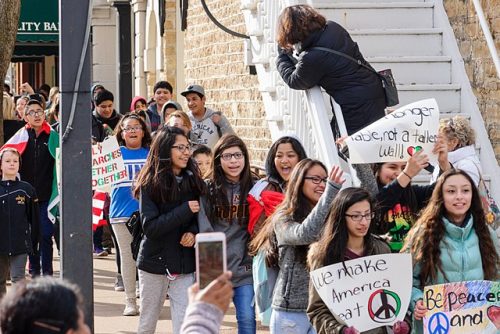 In 2011, the leading Republican presidential candidates met for a debate and former Texas governor Rick Perry was booed by the audience. During the debate, he was asked to explain his approval of a policy at the University of Texas that gave scholarships to undocumented students. The audience did not approve.

Governor Perry was right and the audience was wrong. Universities should be open to all students who show the desire and ability to master a school’s academic offerings. A student may come from in-state or out of state or even from abroad. A university should reward merit regardless of national origin.

Currently, conservative opinion leans against most forms of immigration. For example, Reihan Salam recently published a book whose subtitle is “A Child of Immigrants Argues Against Open Borders.” The current administration has continued to advocate policies that aim to restrict migration, authorized and unauthorized. For example, it has tried to end the DACA program and reduce the number of refugees as well as issue “travel bans” on selected nations.

This shift in opinion is genuinely surprising, given that this nation was founded upon the idea that people should be free to move as they see fit. The Declaration of Independence itself says that a reason for secession is that King George III prevented migration and suppressed the population growth the colonies needed. Ilya Somin, professor at the Antonin Scalia Law School at George Mason University, reminds us that jurisprudence in the 1800s remained pro-immigration as that was the original view of the Founders.

As recently as the 1980s, conservative political leaders often saw the need to allow immigrants, including undocumented immigrants, to be full-fledged participants in American institutions, including education. In 1980, there was a debate between two leading Republican candidates for president—party leader George H.W. Bush and former California governor Ronald Reagan. An audience member asked a question and wanted to know what the candidates thought about allowing migrants into American schools. He wanted to know if children of undocumented immigrants should be allowed to attend public school for free or if their parents would have to pay for it.

George H.W. Bush went first and explained that he wanted a humane approach to immigration that would prevent the issue described by the audience member. Bush emphasized that he saw the need for labor and that the government should not make “decent” and hard-working people into lawbreakers. He then said that he did not want young children to believe that they “lived outside the law.” Bush’s message is clear: It is unwise, and inhumane, to turn children into second-class citizens.

Reagan then added that it is quite normal for people in an impoverished nation, such as Mexico, to seek jobs in the United States and that the law should make it easy for people to move back and forth, as they save money and bring it back to their families. Reagan’s generally supportive view of migration in this exchange was not isolated. It was a recurring theme in his presidency, including his final presidential speech.

The issue raised by the man in the 1980 debate continues today. And as Rick Perry found out, the position of Reagan and Bush is not popular in many circles—but it should be. My view is that support of migration is consistent with conservative values and that young people, including college students, should not be excluded from education because of their migration status.

The argument is intuitive. First, conservative social thought often relies on the idea of personal responsibility, as Dennis Prager argued. People should be judged on their behavior, not the behavior of others. To exclude students from colleges because of a legal violation by their parents directly contradicts this central idea. If a student attends school, participates, and masters the material, then they should be appropriately rewarded. If conservatives oppose affirmative action because it rewards applicants whose credentials fall below a school’s standards, they should also support undocumented students who meet and surpass the school’s criteria for admission and financial support. To do otherwise is a rejection of meritocratic norms.

People should be judged on their behavior, not the behavior of others.

The exclusion of undocumented students also runs afoul of our most cherished legal traditions. The Eighth Amendment to the Constitution prohibits “cruel and unusual punishment.” If one were to take the text in its original meaning, it would certainly imply that rules and regulations that prohibit people from obtaining an education because of a non-criminal procedural violation are not valid. This is because educational credentials are often needed for many well-paying jobs in society. They are also needed if one wants to practice a variety of occupations, such as medicine, law, and teaching. Not only would the exclusion of undocumented students result in vast losses of income, but it also deprives these students of the freedom to compete for jobs and thus contribute to their society.

Perhaps the most important reason to include undocumented students in higher education is Burkean. A key tenet of Burke’s philosophy in Reflections on the Revolution in France, which motivates many modern conservatives, is that one should resist radical social change. Instead, we should understand that society is an organic entity, with traditions that represent accumulated knowledge and wisdom.

Higher education is clearly one such institution and it has built up knowledge through the centuries. Universities have realized that they maintain their vitality by accepting a wide range of students, not just from their own region, but from the world. This range may include those students who have spent their lives abroad, as well as those whose parents may have brought them to our country. Native born and foreign born, including the undocumented, can all be contributors. To tell universities that they can’t choose their student body in the way they see fit undermines their autonomy and represents an intrusive top-down approach to higher education. Institutions of higher education have long understood that their mission is best served when they can attract students not only from America but from across the world.

The Migration Policy Institute estimates that approximately 793,000 individuals have participated in the Deferred Action for Childhood Arrivals Program and that 18 percent of them have enrolled, at some point, in institutions of higher education. As a result, at least 200,000 people who are unauthorized immigrants can be found at American campuses. The real number is probably higher.[1]

We have a choice. We can go against important values, exclude undocumented persons from education, and thus create a student population segregated by national origin and legal status. Or we can allow them to participate in the American project. We can invite them to join our community, be educated in our schools, and renew our nation—as have generations of immigrants before them.

[1] Using data from the American Community Survey, political scientist Michaelangelo Landgrave estimates that over 400,000 students in institutions of higher education are undocumented. He uses the same data and techniques to estimate incarceration rates for undocumented persons as reported in a 2017 policy brief for the Cato Institute.

Fabio Rojas is a professor of sociology at Indiana University, Bloomington, and is the co-editor of Contexts: Understanding People in Their Social Worlds. He would like to thank Michaelangelo Landgrave and Robert Gonzalez for their input on this article.