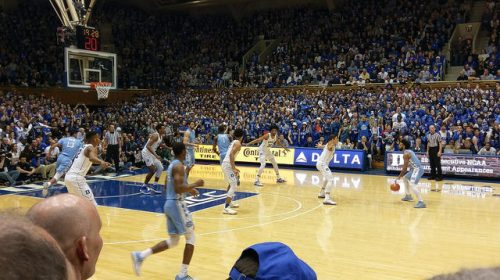 As March Madness hits and the public’s attention is on college basketball’s NCAA Tournament, few spectators know just how much the public subsidizes college sports.

Within the University of North Carolina system, funding can range from $8 million at UNC-Asheville to an eye-popping $96 million at UNC-Chapel Hill. Revenue from broadcast agreements, ticket sales, and corporate sponsorships can lessen the blow, but institutional support and student fees still form the backbone of most athletic departments. In total, the UNC system spent nearly $400 million for Division I athletics in 2017.

The following table shows just how much each UNC system school spent on all athletics programs in 2017—and where the money comes from. The data are self-reported by institutions on NCAA financial reports and on reports required by the federal government. The data were assembled by the Knight Commission for Division I teams only. (Data for lower division schools are less accessible and not reported here.)

While athletics can help students and alumni bond with one another and develop a connection to their alma mater, it’s an expensive way to do so. It’s also not clear that this connection should be preserved at all costs and without limit. Student success needs to be prioritized. Almost $21 million in student fees to support 18 sports programs at UNC-Charlotte, for example, is $21 million that cannot be used for student support services like tutoring, financial aid, and other spending that could directly help students. At some point, university leaders need to reassess their sports spending instead of quickly dismissing every argument against the athletics-arms race.