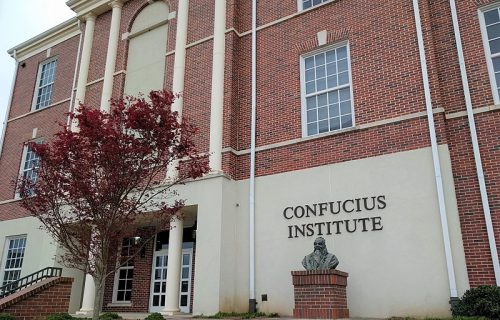 North Carolina State University is one of the latest universities to announce plans to close its Confucius Institute. Eleven American colleges and universities have parted ways with these Chinese government-funded centers, eight of them in the last 14 months.

The Chinese government funds some 500 Confucius Institutes at colleges and universities around the world, and 107 in the United States. Each one comes with teachers and textbooks chosen and paid for by the Chinese government, along with about $100,000 in annual operating funds.

In exchange, China gains a key opportunity to shape the minds of college students and an easy way to monitor American scholars of China and Chinese students studying abroad. FBI director Christopher Wray has also testified to evidence of espionage in Confucius Institutes.

Confucius Institutes have become the subject of increasing national scrutiny in the last year—in large part because of growing reports that China uses Confucius Institutes to stifle academic freedom. They also present a conveniently rosy picture of China that leaves out the Tiananmen Square Massacre, the 1 million Uyghurs now held in concentration camps, and the authoritarian grip of the Chinese Communist Party. (My own report, Outsourced to China, examines the problems with Confucius Institutes in detail.)

Now, colleges and universities are waking up to the fact that they may have permitted the Chinese government to purchase a piece of their curriculum—or at least they realize the political winds have shifted and it is no longer convenient to advertise such a cozy relationship with the Chinese government.  NCSU provost Warwick Arden said he was “certainly aware of the concerns that are circulating around Confucius Institutes,” but insisted, “What we really wanted to do was develop a China/Asia strategy that was independent.”

NCSU, which opened its Confucius Institute in 2007, hosted one of the largest Confucius Institutes in the United States. The Institute sponsored classes on campus for students and the public and has also served as the umbrella for four offshoots called “Confucius Classrooms” at two high schools and two other colleges in North Carolina. Its website boasts that over ten years, the Confucius Institute taught more than 30,000 students, saw 636,000 people attend its events, and trained 1,330 Chinese language teachers. Not a bad investment for the Chinese government’s cultural diplomacy.

Since then, NCSU has become strangely secretive. Two years ago, I went searching for the memoranda of understanding that the university signed with the Hanban (the Chinese government agency in charge of Confucius Institutes) and Nanjing Normal University to set up their Confucius Institute. NCSU claimed its signed memoranda were accessible and transparent, but its website linked to a university database open only to those with university email addresses. A professor there agreed to check the database for me, but even he could find nothing at all related to the Confucius Institute.

Then there’s this curiously defensive language on the NCSU Confucius Institute’s website regarding its “Cultural Resource Room:” “As the People’s Republic of China (China) is a large and diverse country, there is no way that the books in this space will highlight all elements of Chinese language and culture.”

That appears to be a defense against the oft-cited (and true) complaint that Confucius Institutes leave out Tibetans, Uyghurs, and other minorities in an effort to showcase only the Han majority.

The website also claims that “None of these books or decorations have any political and controversial intent and thank you for respecting this Cultural Resource Room.”

But China has long selected “facts” to serve its propaganda, and Confucius Institutes are well-known to present politically divisive claims as basic truths. Consider Taiwan, the self-governing republic that China claims belongs to the People’s Republic. Earlier this year, China forced several American airlines to erase Taiwan from their lists of destinations and shade their maps to show the island in the same color as mainland China. Confucius Institute-sponsored conferences have gone so far as to physically rip out conference program pages that mention Taiwan or edit references to Taiwan from a speaker’s biography. Would NCSU consider the convenient elision of all reference to Taiwan as evidence that nothing in the Confucius Institute has a “political intent?”

Still, NCSU has made the right call in parting ways with its Confucius Institute—and it deserves praise. In the process, it is moving more of its Chinese-language instruction in-house to the domain of its faculty. This is where university instruction belongs. Perhaps North Carolina State University should have made this decision years ago, but, to its credit, it has eventually done the right thing.

Rachelle Peterson is Policy Director at the National Association of Scholars and the author of Outsourced to China: Confucius Institutes and Soft Power in American Higher Education.