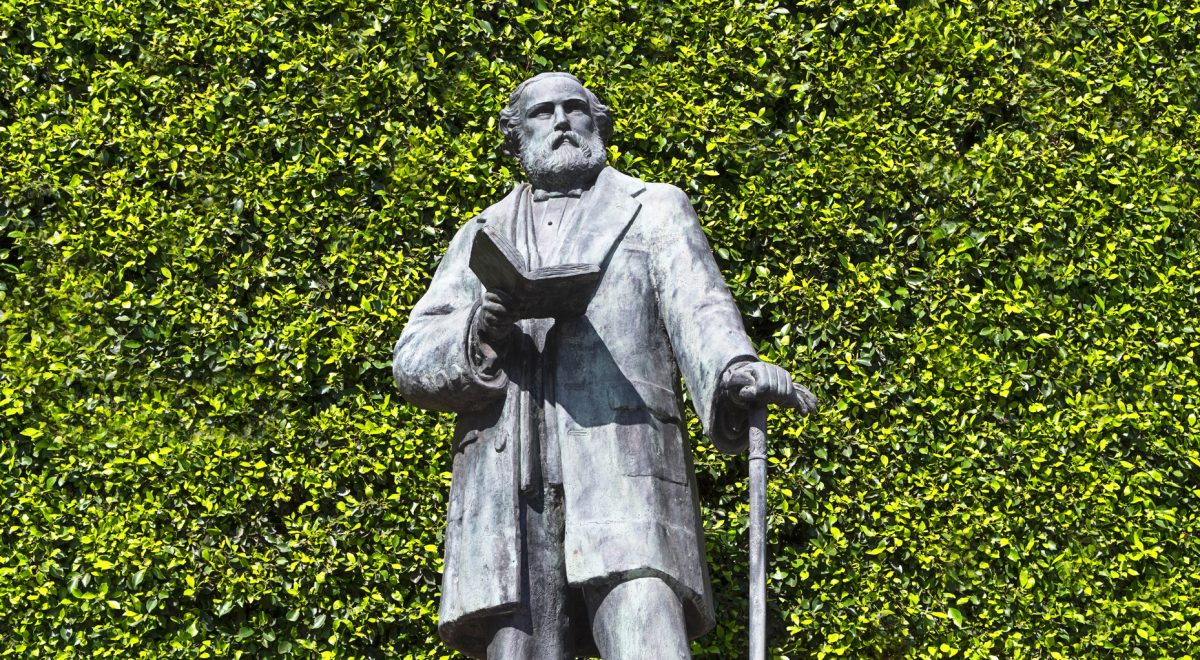 In recent years, the media has given us dire warnings about the “crisis of the humanities.” In article after article, one reads about falling enrollments in college English departments and funding cuts. Inside Higher Ed, a popular website that covers higher education, reports that English majors have declined 20 percent since 2012. History programs have seen a similar decline in degrees awarded. Across the political spectrum, pundits tell us that the humanities are under attack.

But there is one point of contention: the diagnosis for the decline. The left tells us that the problem is capitalism. According to them, the business model of higher education requires that academic programs must be cut unless they turn a tidy profit. Commentators on the right tell us that declining enrollments are a symptom of rot in the university. After years of professors spouting politically motivated social theory, students in the humanities have finally abandoned the classrooms of the “tenured radicals.” But what if both narratives are misleading?

The actual answer lies in a trend that transcends any single college and that predates the culture wars of the 1980s: There has been a massive shift in student attitudes since the 1960s toward vocationalism. As student goals shift, so do their choices of majors.

There are a lot of reasons to mistrust these two explanations from the left and the right. There is no reason to think that a modern capitalist society rejects the humanities. A skeptical reader on the left might be shocked by these claims, but the evidence is all around us. We live in a world with an abundance of creative work. Anyone can visit YouTube and see nearly every Shakespeare play without paying a single penny. A website called “Philosophy Index” offers complete online versions of classic philosophy. Every year, billions of dollars are spent on books and the business data website Statista estimates that the global book market will increase from $113 billion in 2015 to $123 billion in 2020. Roughly speaking, that means the average person on earth is spending about $17 per year on books, which includes novels and popular history.

If capitalism isn’t killing off the humanities, then why do people keep saying there is a crisis in the humanities? Observers often conflate two very different things: humanities broadly understood and college programs in the humanities. The world of novels, film, and art are growing; we live in a golden age of the living humanities. In contrast, academic programs are reeling from declining enrollments.

Similarly, the explanation from those on the right is off the mark. To them, the decline of the humanities comes from the vagaries of the academy. They say that students are being driven away by the apostles of postmodernism. And, truth be told, there are humanities instructors who exemplify the worst stereotypes. See, for instance, the scandal around Avital Ronell. Her colleagues accuse her of subverting the traditional curriculum of the NYU German department in favor of Continental theory such as deconstruction. Still, that is only part of the story. Most English departments still offer Shakespeare, most philosophy departments still teach Aristotle, and most history departments teach traditional American history. In my own university, and in many others, these courses are often quickly filled. Universities continue to offer courses on the canonical humanities and students still sign up for these courses. If this is the case, then why are departments losing students?

We know about this increased concern for jobs from the annual College Freshmen Survey, conducted annually by the Higher Education Research Institute at UCLA. The survey began asking a sample of American college freshmen what they valued in an education. In 1970, approximately 50 percent of respondents said that they were attending college to make more money. By 1994, that jumped to over 80 percent. The survey also asked respondents to choose which idea they valued—“develop a meaningful philosophy of life” or “be very well off financially.” In 1966, “meaningful philosophy” beat “well off financially” 95 percent to 45 percent. By 1996, the situation was reversed—“meaningful philosophy” had dropped to about 45 percent while “well off financially” jumped to 80 percent. Recent surveys show that things haven’t changed much in the early 21st century.

Additionally, the landscape of higher education has profoundly changed over the last fifty years, pushing the humanities programs to the side. In the mid 1950s, colleges only offered a handful of majors—various types of humanities such as history, modern and classical languages, and philosophy; physical and biological science; and a handful of social sciences.

While curmudgeonly postmodernists still exist, they are not the major cause of declining student interest in the humanities. Innovation and reform in education matter more.

Now, the situation is reversed. The number of fields of study has multiplied and much of the growth is centered around vocational and quasi-vocational fields. Most research-oriented institutions now offer degrees in business, education, and health sciences. Many also offer engineering and applied science. These fields offer intellectually vibrant topics along with the promise of future employment. It is not surprising that many of the 21st century’s most popular college majors are vocational in focus such as business, nursing, or engineering, or have a close tie to business, such as economics or computer science.

The humanities, on the other hand, have not kept pace with a vocational focus. We often hear stories of the enterprising English student who encountered the curmudgeonly postmodernist and then tuned out literature from her life. But this vivid anecdote does not reflect the more profound and fundamental shift in American higher education, a transformation so massive that it has redefined the spirit of the university. While curmudgeonly postmodernists still exist, they are not the major cause of declining student interest in the humanities. Innovation and reform in education matter more. Starting in the late 1800s, American educators reformed the university so that students would no longer be forced to read four years of Latin and Greek. Instead, they brought in a system of election and a confederation of academic departments, each dedicated to its own pursuit of knowledge.

Until the mid-20th century, this system worked as intended. It provided a foundation for a university where students could immerse themselves in core ideas of the humanities and sciences. But the system eventually transformed itself into the system that we have today, which is oriented toward job-seeking and income attainment. It is no small question whether, in this world of the modern university, the humanities will regain their former glory.

What does the future hold for the humanities? In terms of creative work, we will continue to see enormous growth and innovation. We live in a world of great novelists like Haruki Murakami, Jonathan Franzen, and Toni Morrison. The internet provides low-cost access to the intellectual treasures of our culture. There is little reason to doubt that this will change.

College humanities programs, though, are in a different position. They have not constructively engaged with the massive wave of vocationalism that has changed the university. These academic programs no longer have an exclusive claim on critical thinking and many students no longer think their services are pertinent to the modern workforce. The response is not to double down on esoteric theory, or endlessly focus on social justice. The response may be simpler. Accept that the university has changed but specialize in providing only what the humanities can offer: a lifelong engagement with ideas.

Fabio Rojas is professor of sociology at Indiana University, Bloomington, and is the co-editor of Contexts: Understanding People in Their Social Worlds.