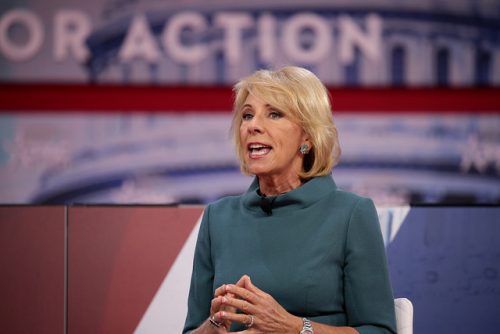 No one can accuse Education Secretary Betsy DeVos of inaction. Just within the past few weeks, her Department of Education announced the overhaul of two major Obama-era regulations. The next stage of DeVos’ agenda will review several of the rules governing which higher education institutions and programs are eligible for federal funding, with an eye toward giving colleges more flexibility.

The changes DeVos will likely attempt highlight a dilemma all conservative higher-education reformers face: the tension between promoting innovation and protecting taxpayers.

While still in development, DeVos’ agenda comes down firmly on the side of creating a more hospitable environment for educational innovation. For instance, she wants to encourage the growth of competency-based programs, whose degree requirements focus on learning skills rather than completing semesters. Limitations on when aid-eligible colleges can contract with third-party educational providers are in DeVos’ crosshairs as well. And the Trump administration has also expressed interest in allowing short-term educational programs to receive federal grants. (Currently, programs must exceed 600 hours of class time, or around 20 weeks for a full-time student.)

In the optimists’ view, deregulating aid eligibility will free colleges to develop new models to equip students with the skills they need to thrive in tomorrow’s economy. Short-term programs will help the workforce adapt to a rapidly changing labor market. Partnerships between traditional colleges and outside providers will combine the best features of reputable incumbents and nimble startups.

But there are big potential downsides to DeVos’s proposals. Allowing greater flexibility in loan eligibility also means giving out taxpayer money to schools and programs not currently receiving it, which will increase total federal spending on higher education. According to the Congressional Budget Office, allowing short-term programs alone could cost half a billion dollars over the next decade.

Encouraging new and innovative programs, though desirable, requires that taxpayers finance those ventures and bear the risk of their failure. Money will inevitably be wasted when some ideas don’t pan out. Bad actors will exploit looser rules to enrich themselves on the back of Uncle Sam.

Recent history is full of warnings about adding federal dollars to higher education. Unlimited federal lending to graduate students, for instance, has encouraged the growth of low-value graduate programs, even at prestigious institutions. Federal aid fueled a for-profit college bubble, which led to enormous government losses when large for-profit chains such as Corinthian Colleges failed. Freely available taxpayer money attracts the unscrupulous as well as the innovative.

The federal government controls most of the college-finance market, making nine in ten new student loans. That dominance leaves little room for a private market to thrive. But a larger role for the private sector in paying for college may very well be the solution that can mitigate these problems. Private lenders have incentives to scrutinize each program seeking financing and separate good value from empty promises. Of course, the private market sometimes makes the wrong call. The key difference is that private lenders must continually improve their processes for deciding which programs to fund, since they themselves must face the consequences of their mistakes, not taxpayers.

Both the federal government and the private market face a tradeoff between supporting innovative new ideas and shielding themselves from losses on bad bets. But private lenders minimize this risk through careful scrutiny and rigorous performance standards. By contrast, the Education Department often fails to balance these objectives because it has no incentive to. When the federal government gets it wrong, students and taxpayers, not bureaucrats, suffer the consequences.

And these consequences can be expensive: federal intervention has sullied many sectors of the economy, but higher education is in a league all its own. Over $130 billion in taxpayer-funded student aid, mostly student loans, flows to American colleges and universities every year. (That does not include the nearly $38 billion in research grants colleges receive, either.)

When the federal government gets it wrong, students and taxpayers, not bureaucrats, suffer the consequences.

The scale of this intervention gives the Education Department the capability to dictate how colleges and universities run, since the loss of federal funding is a death sentence for most institutions. As Congress has ceded power to the administrative state, activist regulators have gained it, deciding everything from what constitutes course credit to how colleges should handle sexual assaults. As a result, significant authority over the American higher education system now falls to Betsy DeVos, rather than elected legislators.

Despite the power shift to the executive branch, Congress can still act. It can help DeVos mitigate the downsides of the innovation agenda she has promoted at the Education Department. It can maintain looser rules on the types of programs eligible for federal funding but require all aid-dependent colleges to meet certain performance benchmarks. Essentially, the government would dole out funding under the philosophy of “we don’t care how you get there, as long as you get there.” But it’s hard to design effective benchmarks that capture the right sorts of outcomes, and politically connected colleges have escaped enforcement of such rules before.

For instance, the Obama administration advanced an outcomes-based rule, known as Gainful Employment, which penalized colleges where students’ debts were too high relative to their incomes. Though reasonable in theory, the actual rule was full of coverage holes and unintended consequences. The rule only considered the outcomes of students who graduated, thus giving colleges an incentive to stop struggling students from graduating. The administration also exempted degree programs at public and private nonprofit colleges, which enroll most of the nation’s students; these established institutions would have put up a serious fight had they been subjected to the same rules.

The Obama administration’s bungling of Gainful Employment shows that we should keep our expectations low that government will ever resolve the dilemmas inherent in funding higher education with taxpayer money. That is why, ultimately, the best way to navigate the tradeoff between innovation and taxpayer protection is for the government to cede more responsibility for funding higher education to the private market. Lending to graduate students and parents of undergraduates, two areas where the rationale for government involvement is thin, are particularly ripe for privatization.

But political realities make it unlikely that that will happen anytime soon. House Republicans’ higher-education bill limited, but did not abolish, federal lending to graduate students and parents. President Trump’s most recent budget didn’t even go that far. Serious changes to student aid are unlikely to garner the bipartisan support needed to pass Congress.

For the time being, then, Secretary DeVos controls the scales that balance the tradeoff between innovation and taxpayer protection. Therefore, DeVos should move forward on her innovation-promoting agenda, but with a healthy amount of caution and concern for taxpayer protection. While there is plenty of scope for policymakers to improve our higher-education system, they should also recognize the limits of their abilities.

Forgiving Student Debt Isn’t the Solution to Anything