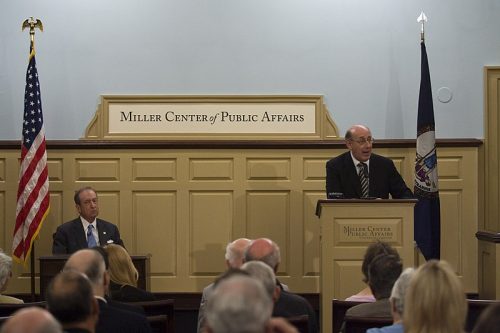 With the memory of last August’s violent alt-right protest and counter-protest still raw, the University of Virginia is again under siege.

The new invasion actually began a few weeks ahead of schedule. “As grim anniversary nears,” the Chronicle of Higher Education began its coverage in late July, and Inside Higher Ed also emphasized “the approaching one-year anniversary of the white supremacist march on Charlottesville.” Nor has attention been limited to academic circles, with both Huffington Post and Talking Points Memo, for example, reporting objections to the “unconscionable” new invasion.

Unlike last August, however, when hundreds of white supremacists, many of them armed, descended upon what Jefferson called the “academical village” of Charlottesville, this year’s invading alien force consists of only one unarmed man, Marc Short. Until recently, Short was President Trump’s legislative director. He’s been offered a position at the Miller Center, an affiliate of UVa that specializes in studies of the presidency and public policy.

The reaction in the UVa community to Short’s hiring was fast and furious. A protest petition was immediately circulated—in just a few days signed by over 2,000 academical villagers.

Although the protesters detest everything about Trump, their white-hot outrage is reserved for Trump’s comments last August when, as Inside Higher Ed put it, he “infamously blamed” the violence at Charlottesville on both sides. In the view of the petition signers, the fact—and it is a fact—that violence clearly came from both sides does not absolve Trump and those who do not sufficiently repudiate him from the crime of claiming moral equivalence—that the violent alt-left (antifa) protesters were as bad as the alt-right protesters.

Both the ACLU of Virginia and the Los Angeles Times, among others, have shown that violence did indeed come from both sides, but to say that out loud in Charlottesville is to be branded a Trump-loving Deplorable.

As far as I know, Marc Short hasn’t said racist things, but he did say Trump’s statements about Charlottesville were appropriate. Anyone who has had the opportunity to make clear that the president’s initial remarks about Charlottesville were hugely inappropriate, and who hasn’t taken up the opportunity to do so, is problematic.

Short, in short, is “problematic” as much because of what he didn’t say as what he did.

Nicole Hemmer, an assistant professor of presidential studies at the Miller Center, told the Daily Progress that “Short’s hiring is an institutional and moral crisis” because “the Trump presidency does not represent American democracy and has upended the political order.”

Her recent Washington Post article, “How The Right Became Addicted To Conspiracies,” blamed the mainstream conservative press for continually finding “slopes to slip down, landing again and again in the muck of conspiracy.” An example: “just about everything that has come out of Donald Trump’s mouth since 2011.” In a recent Vox article, the outspoken Hemmer wrote that Short represents “the forces of illiberalism.” Tolerance? “Liberals,” she wrote, “have to take a stand against illiberalism, lest they be destroyed—along with tolerance itself.”

The unrecognized irony here, of course, is that there is a name for the intolerance of universities and other institutions refusing to hire anyone defending illiberalism: McCarthyism.

It is possible that at present the UVa faculty contains a few (probably very few) Trump-defending witches, but if so I suspect that they are reluctant to say so in public, just as the earlier McCarthyism was characterized by what historian Ellen Schrecker has called “really ferocious” self-censorship. One of the justifications of purging schools and colleges of those who were thought to defend the illiberalism of their day, as Institute for Advanced Study historian Joan Scott has written in reviewing a book about academic freedom during McCarthyism, was “the protection of vulnerable young minds.”

Today the vulnerability seems much more extensive. Not just young minds, but minds of all ages must be protected against anyone who was ever affiliated with Trump.

as we approach the first anniversary of the white nationalist violence against this university, this town, and our friends, neighbors, students, faculty and staff—all of whom are represented among the injured—it is unconscionable that we would add to our university a person who served in a high-level position for the administration that first empowered, then defended, those white nationalists. We are a community still in the process of healing, and someone who defended the president’s remarks after the violence here is a barrier to that process, a source of trauma in a still-traumatized community.

This trauma is perfectly reflected in a question Nicole Hemmer asked herself as she walked up to the Miller Center the day she heard of Short’s appointment. “The space between me and the building felt like a moral minefield,” she wrote on Vox. “If I walked through the door, was I complicit in the destructive illiberalism of the Trump administration?”

The protesters sound like they would like UVa and Charlottesville to become one giant safe space, free from infection by even one carrier of the Trump-defending virus whose appointment would “traumatize” them and make them “complicit” with evil. This fear that one Trump veteran could contaminate the UVa community by making it “complicit” with evil is not limited to snowflake students and junior faculty. On July 30 two distinguished UVa historians, William Hitchcock and Melvin Leffler, resigned from the Miller Center in protest.

“Leffler is a former dean of the College and Graduate School of Arts and Sciences at UVa,” Politico pointed out in its article on their resignation, and “Hitchcock is a New York Times bestselling historian and has been a finalist for the Pulitzer Prize.”

In a July 31 The Washington Post op-ed the disgruntled historians assert that they oppose Short not because he’s a Republican but because he has been “profoundly partisan” and the Trump administration is “different”—guilty of “breaking the norms of presidential behavior…upending the rules of civil discourse… casting doubt on the meaning of truth and…embracing the rhetoric of racism and white supremacy.”

Some Republicans, that is to say, are OK but “highly partisan” Republicans are not.

Indeed, “we do not assert,” they claim, “that service in the Trump administration is a bar to a fellowship in our university,” and they proceed to list some other Trump-serving Republicans they would find acceptable despite their service in this “truth-challenged administration.” This claim, however, is not credible. Both Leffler and Hitchcock signed the petition—Hitchcock even bragged to the Cavalier Daily that he was the first signer—opposing the university serving “as a waystation for high-level members of an administration that has directly harmed our community.” The petition also asserted that “it is unconscionable that we would add to our university a person who served [the Trump administration] in a high-level position.” Apparently, they now find that extreme version of blacklisting embarrassing.

Apparently, professors Leffler and Short have dispensed with the First Amendment, perhaps relegating it to their history classes.

In their resignation letter, Leffler and Hitchcock make a charge against Short that deserves attention as another example of the new campus McCarthyism. They find it “especially egregious” that “by not emphasizing the threats to human decency posed by the public display of Nazi symbols and racist diatribes in our own neighborhood, Mr. Short was complicit in the erosion of our civic discourse.”

So, Short did not denounce the “public display” of offensive symbols and diatribes? Apparently, professors Leffler and Short have dispensed with the First Amendment, perhaps relegating it to their history classes.

So far, the attempt to short-circuit Short’s appointment has come up short. On July 27, William Antholis, director of the Miller Center, issued a statement and published an op-ed in The Washington Post re-affirming Short’s appointment, pointing out that for an institution aiming to be “the leading center for the study of the American presidency,” Short represents “a missing critical voice—one that represents members of Congress and the Republican Party who continue to support the president in large numbers.”

Not only do professors Leffler and Hitchcock not want to hear that “critical voice,” but, as director Antholis stated to Inside Higher Ed, they “would deny other faculty members the opportunity” to hear it.

That party and those numbers represent about half the country, but the Short deniers do not regard them as legitimate or normal. Professor Leffler told The Washington Post it is “absolutely wrong to legitimize and normalize” someone close to the president because, as professor Hitchcock told Inside Higher Ed, “Trump’s relationship with the truth and democratic norms is an ‘epistemological crisis.’”

Ironically, the most likely results of the Trump denouncers’ efforts to bar the university door to Short will probably be confirming the distrust many have of higher education’s professed commitment to diversity and its coddling of faculty and student snowflakes, and thus the creation of more Trump voters.

John Rosenberg is a former history professor and writes at Discriminations.