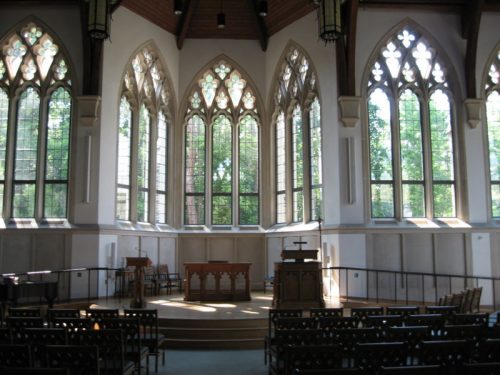 The chickens have come home to roost at Duke’s Divinity School. Protesting students claim the school is insufficiently diverse. More needs to be done, they say, to combat racism, transphobia, homophobia, and associated evils. All this despite a campaign by the administration to achieve these very aims in the course of which a distinguished faculty member was induced to resign.

Paul J. Griffiths, Warren Professor of Catholic Theology, resigned last year after a dispute with Dean Elaine Heath. Griffiths was essentially fired for sharing his frank opinion about an effort to indoctrinate faculty on racial issues. Dean Heath said in an interview after her appointment last year that pushing the school to be more diverse was a top priority. She professed herself committed to “diversity and inclusion,” but apparently Prof. Griffiths’ remarks were a bit too diverse for her to include.

Here is the underlying problem. Educational institutions these days are required to show not just sympathy, but active support—even celebration and incorporation into the curriculum—for an ever-expanding list of “marginalized groups.” Apparently, all institutions, even divinity schools, are guilty of “institutional racism” and “implicit bias”—“structural sins,” as Dean Heath called them in a March 18 op-ed. These maladies have no presenting symptoms; they are covert, not explicit. Tests exist to measure “implicit bias” but they are not scientifically valid, and the idea of “institutional racism” seems almost to be defined by the absence of individual racism. If an institution is accused of racism, it is in a quandary. How should it defend itself? It may have the condition or it may not. Best to “vaccinate” against it.

Vaccination is now provided by an entire industry of trainers/indoctrinators. One such organization, the Racial Equity Institute, a Duke favorite, apparently, was chosen by Dean Heath and Divinity School Professor Anathea Portier-Young to run a two-day training session last year. Divinity faculty were “strongly urged” to attend. Professor Griffiths objected to this exercise in strong terms, calling it “anti-intellectual;” “there’ll be bromides, clichés, and amen-corner rah-rahs in plenty. When (if) it gets beyond that, its illiberal roots and totalitarian tendencies will show.” His email, which he shared with Divinity faculty, was not in any way racist, sexist, or ad hominem, as a response from Dean Heath seemed to imply. Nevertheless, it was enough to cause Heath to bar Griffiths from faculty meetings and exclude him from research or travel funds.

Given all these proofs of her support for those much-maligned “marginalized groups” it must have been galling indeed for Dean Heath to have her state-of-the-school address be disrupted on February 28 by four dissident female students bearing bull-horns and chanting, “I am somebody and I won’t be stopped by nobody,” followed by a rap, a little theatrical performance, and some support from faculty and students in the audience. All can be seen in a rude—though rather touching—online video.

There is poetic justice in this incident. Despite the Dean’s earnest attempts “to provide a welcoming and safe place for students,” even after she designed “a space for the work of Sacred Worth, the LGBTQIA+ student group in the Divinity school”—even after disciplining, and losing—Professor Griffiths, in spite all this, she has apparently not done enough! The LGBT folk want more, much more, in the form of 15 demands. “We make up an integral part of this community, and yet our needs remain deliberately unheard.”

The list of “demands” is both revealing and embarrassing. One demand asks for a non-discrimination policy “to be signed by all incoming students, faculty, and staff.” But other demands are in fact discriminatory: “To appoint a black trans woman or gender non-conforming theologian” as well as “a tenure-track trans woman theologian” and “tenure-track queer theologian of color, preferably a black or indigenous person.” And “At least 10 academic and 15 summer placements designated for trans and queer students at sites that are overtly affirming of LGBTQIA+ peoples (1/3 of these placements must be made up of predominantly people of color).” Obviously, no “cis white male” need apply for any of these positions.

Other demands make the students look like spoiled children: it is all about them: “our needs [are] unheard.” They want “three yearly full tuition, need-based scholarships for queer and trans M.DIV students, prioritizing trans and queer femme students of color” and “A Queer Theology class taught during the Fall 2018 semester.” Even “Clearly marked universal (gender non-specific) restrooms.” The protesters do not want fair or equitable treatment. Fairness is not enough: they want explicit discrimination in their favor.

Perhaps their real beef is that the Divinity School, which is an educational institution and not a therapist’s couch, simply does not take what they consider to be their essence, their sexual or racial identity, seriously enough. Their issues are not at the center of the school’s curriculum. But then, why should they be?

Other demands betray the students’ adherence to discredited epistemological positions that make intellectual discourse almost impossible. For example, they want a “queer theology” course and the appointment of “a black trans woman or gender non-conforming theologian,” which seems to imply that “queer” people do theology differently from other people. In other words, for the protesters there seems to be no neutral “truth,” no theology per se. Everything must be tailored to their own idiosyncratic sexual or racial preferences. This is not identity politics; it is identity as Everything.

The idea that everyone has her own truth is still a position that makes science, scholarship, and rational argument impossible.

This is the antithesis of what a university is supposed to be. The postmodernists a few decades ago promoted the self-contradictory view that there is no such thing as truth. As critics from Noam Chomsky to Daniel Dennett have pointed out, this view makes a nonsense of all science, indeed of all scholarship. It also makes a nonsense of the postmodern position itself: Is it true? Oh, then there is a truth. Is it false? Don’t know, because there is no truth. The idea of “no truth” eventually came to seem absurd but was soon replaced by the idea that everyone, or at least every group—especially “marginalized” groups—has its own truth. This is a distinction without a difference: The idea that everyone has her own truth is still a position that makes science, scholarship, and rational argument impossible. It is this position that the Div School protesters seem to have unthinkingly adopted.

What is embarrassing about a protest like this is the incredible naivete of the protesters. They seem to be painfully unaware of history; they seem to have no context other than the soothing glow of shared victimization. Since the Western intellectual tradition is largely the product of white men, mostly dead, the students’ disdain for that group presumably allows them to ignore it. But that means these kids are not ready to participate in a university and the university has no business going along with their profoundly ill-informed ideas.

What to do? Well, more education would help. As a first step, they could look to the lives of people they might want to emulate, like Sor Juana Inés de la Cruz, “a self-taught scholar and student of scientific thought, philosopher, composer, and poet of the Baroque school, and Hieronymite nun of New Spain, known in her lifetime as ‘The Tenth Muse’.” Born in 1651 of a mixed-race mother and a Spanish father, she gave up the possibility of a rich marriage to become a nun so that she could devote more time to writing and study. There was no “safe space” for Sor Juana who died of the plague she got while nursing infected nuns. She followed an inner truth in spite of all obstacles. How silly the desires of these protesters appear in the shadow of this heroic lady.

Or, in a more secular vein, if they wish to gain greater insight into equity and diversity they might read one or two works of the very multicultural Latvian-Jew-Englishman Isaiah Berlin. He well understood the difficulties of reconciling the diversity of humanity with liberal democracy. As an introduction to Berlin, they might take a look at philosopher John Gray’s excellent (long) talk, delivered in the city of Riga, Berlin’s birthplace.

Alas, real education is an unlikely prospect under the current Divinity School regime. On March 6, Dean Heath announced the formation of an “Academic Affairs Task Force on Gender and Sexuality Student Concerns.” In other words, more of the same combination of indoctrination and empty rhetoric that so offended Paul Griffiths. I suggest an alternative: How about a two-day tutorial and seminar—for students, not faculty—on something like the topic and role model I just suggested? It might help educate young rappers who are obviously in need of a broader and deeper perspective. If it can also heal the divisions in the Divinity School, so much the better. At the very least it would do what the School is supposed to do: educate.

John Staddon is James B. Duke Professor of Psychology and Professor of Biology, Emeritus, at Duke University. His most recent book is Scientific Method: How science works, fails to work or pretends to work. (2017) Routledge.