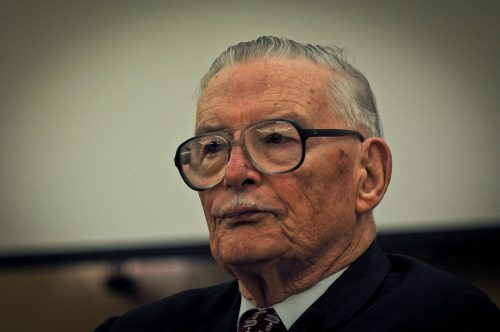 Last year, Duke University History Professor Nancy MacLean became one of the country’s best-known academics for her book Democracy in Chains. That is not, however, to say that her book was so praiseworthy that it made her famous. Quite the opposite—Democracy in Chains was excoriated by academic critics for its blatantly dishonest attack on the thinking and indeed the character of the late James M. Buchanan, the 1986 Nobel Prize winner in economics.

MacLean sought to depict Buchanan as a closet racist whose intellectual breakthrough of what is now called “public choice” theory was actually meant to help segregationists ward off the integration of public schools in the South. While her conclusions were embraced by most leftists because they cast such an ugly shadow over the intellectual opponents of big government, scholars who have actually read Buchanan objectively and many who knew him (he died in 2013) blasted the book with salvo after salvo of careful criticism.

I noted a few of those attacks in this Forbes article, in which I lamented that the federal government had helped to underwrite MacLean’s shoddy “research.” Especially telling was this review by a faculty colleague at Duke, Professor Michael Munger, who found it strange that she would write a book on Buchanan without bothering to discuss her thoughts about him with leading public choice scholars who had first-hand knowledge of his life and work.

A characteristic of a true scholar is that he or she listens to criticism. True scholars seek truth and when others point out errors, they acknowledge their mistakes. In fact, true scholars are glad when their mistakes are revealed because they do not want to foment erroneous beliefs. As Professor James Otteson wrote in this Martin Center essay, scholars quest for the truth, not for cheap “wins” over their adversaries.

Ever since the publication of Democracy in Chains, MacLean has been surrounded by criticism that her impugning of Buchanan’s motives, as well as those of everyone who argues in favor of limited government, was far out of bounds. Nevertheless, it is clear that she has paid little or no attention to that criticism. Recently she doubled down on her attack by declaring in front of an audience that people who embrace libertarianism must be lacking in human feelings.

In February, MacLean was discussing her book at an event in New York. An audience member asked: “Where do Buchanan’s motivations lie? Are they ones of personal greed? It seems like it’s a little grander—is it malevolence?” Had she been paying any attention to the criticism of her book over the preceding year, MacLean would have had to honestly answer that question by saying, “I really do not know his motivations and decline to speculate.” Instead, MacLean thanked the individual for asking a “profound question” and said this about Buchanan and libertarians generally: “It’s striking to me how many of the architects of this cause seem to be on the autism spectrum—you know, people who don’t feel solidarity or empathy with others, and who have difficult human relationships sometimes.”

She continued, saying that Buchanan had “some kind of wound in him” so that he could not enter politics in Tennessee, and therefore “he made it his mission to debunk the whole of politics and show that no one who was in it was good.”

Quite a harsh assessment, but is it true? Writing for Reason, Robby Soave points out:

These are remarkably bad-faith assumptions about libertarian philosophy and autistic people, built upon an equally shaky foundation: MacLean presents no evidence that Buchanan was autistic, aside from that single anecdote in his memoir…MacLean appears to have spun a single story into an entire theory that ‘many of the architects’ of the libertarian cause are autistic.

Among many others who found MacLean’s assertion of a connection between autism and libertarian thinking offensive was frequent Martin Center contributor Troy Camplin. Camplin, who has Asperger’s Syndrome and an autistic son, actually knows what he is talking about. He wrote on his blog:

James Buchanan was a classical liberal. That is, he believed in small government, free markets, and that people should be generally left alone. MacLean interprets this as evidence of Buchanan being autistic (she doesn’t directly say it, but certainly implies it, which is the M.O. in her book, by the way). She accuses us of not feeling solidarity with other people and of not feeling empathy. Naturally, those of us on the spectrum know that we are certainly empathetic, as I have discussed—in some cases and ways, more so than others. I know that I have the ideology I do precisely because of my strong concern for the poor.

Another critic is Mathieu Vaillancourt who wrote an op-ed piece for the Wall Street Journal in which he objected to MacLean’s “ignorant, ugly stereotyping” of people who have autism. He wrote:

MacLean is equally wrong in stereotyping people with autism as libertarians. Like everyone else, we believe in different political ideologies and vote for different political parties. We’re humans, not robots. Nor are classical liberals and libertarians emotionless, compassionless people. The vast majority of us believe in helping the needy; we simply think aid is better given in a bottom-up, voluntary way than dispensed by a centralized government. We disagree among ourselves on how to achieve social goals. But it’s outrageous to suggest that we don’t care.

A number of Duke students also entered the fray by posting an online petition calling upon the university’s administration to condemn MacLean’s “abhorrent” statements. (It has not done so.)

MacLean finally decided to respond to the criticism and sent an email to the Duke Chronicle. In its story, MacLean wrote, “I do apologize. It was a long night and rather than take the time to find the right way to express what I wanted to say, I reached for a reference that was inappropriate and just wrong. You can be sure I will never again speak as I did here. Having sought deeper knowledge about autism I already learned my error about empathy and solidarity. I will continue to learn more going forward.”

That admission of error only goes to her misunderstanding of autism. It does not appear to extend to libertarians, whom she still thinks are morally defective for believing that a minimal state is best. The whole point of Democracy in Chains was to claim that public choice analysis and libertarian philosophy, in general, are just covers for greed and racism. She ought to admit that error, but evidently will not.

This controversy reminds me of another at Duke last year when Religion Professor Phil Griffiths dared to say that a “diversity training” program would simply be a waste of time to attend. For that, he was brought up on harassment charges by angry faculty colleagues and hounded into retirement. (Rod Dreher wrote about that for the American Conservative.)

Note that merely questioning a “progressive” belief such as the benefit of diversity training is enough to unleash an academic mob, while writing a book that smears a Nobel laureate and resorting to nasty stereotyping of people to defend it elicits no disapproval at Duke. That tells us a lot about the double standards now in place throughout our higher education system.