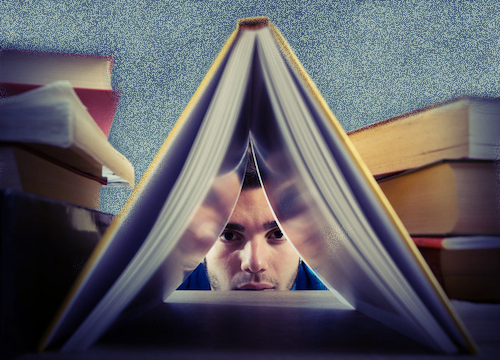 Each year, roughly 1.4 million high school students take college courses. This is made possible by dual enrollment programs, which give those students opportunities to earn credits and work toward a college degree or technical vocation. Over 70 percent of courses are offered by community colleges.

Such programs were praised recently by the Department of Education for expanding higher education “access” and helping students in terms of “credit accumulation.” However, others have suggested that college administrators exploit dual enrollment programs to increase tuition revenue, and some argue that the courses often are dumbed-down.

Smith said that one student, who had failed his class once and was on the verge of failing again, had transferred to Sam Houston with 65 credit hours earned in high school. Smith discovered that the student had failed a college math class in high school, but was able to improve her grade after her mother complained. Smith said the student’s courses “were not college level.”

In addition to the issue of low academic standards, there is reason to believe that a mercenary motive drives many of these dual enrollment programs. According to a 2016 study by the American Association of Collegiate Registrars and Admissions Officers, 59 percent of surveyed institutions said they use dual enrollment programs to meet their enrollment goals. It seems that many community college administrators, perhaps worried about recent enrollment declines, have come to view such programs mainly as revenue generators.

Recently, concerns over dual enrollment have been raised at Cleveland Community College in Shelby, North Carolina. The school’s problems, however, may go beyond dual enrollment; they appear to extend to issues involving improper college governance, lack of oversight, and lack of transparency.

First, let’s look at the dual enrollment program. All 58 of North Carolina’s community colleges participate in a program called Career and College Promise. In the 2013-2014 academic year, state funding for it totaled nearly $57 million dollars.

The program’s “Career and Technical Education” pathway stipulates that to be eligible, a prospective student must have a 3.0 high school GPA or have permission from his or her principal. Additionally, students have to take an assessment test (called PLAN) to demonstrate college readiness in English, math, and reading. These scores “should be considered” by administrators when determining students’ eligibility.

Now-former Cleveland Community College (CCC) instructor Ginger Bullock, in a recent Martin Center interview, argued that few mechanisms are in place to ensure accountability and enforce those academic standards. She said that many ill-prepared high school students are allowed to take college courses, and that leaders at her institution ignore the problem because of an obsessive focus on increasing enrollment. Bullock claims that instructors, feeling pressure from both college and high school administrators, let students filter through substandard classes.

Last summer, Bullock was informed that she would be teaching a marketing course at a local high school (in fact, all of the college’s dual enrollment courses are taught at local high schools). According to Bullock and others, CCC requires that full-time faculty, not adjuncts, teach the dual enrollment classes. This means that Bullock would have had to travel to the high school every day and not be as available to her students at the college.

At any rate, Bullock says that after hearing other instructors’ concerns about the program, she asked around and learned that, in one course, 9 out of 14 high school students had GPAs below 3.0, and one student had a 1.7 GPA. Bullock says that she felt ethically responsible to report this information to the college administration.

She claims that several administrators, including CCC’s executive vice president Dr. Shannon Kennedy, did not think there was sufficient evidence to question the program’s integrity. Bullock says she told administrators that she could not participate in something that she believes harms students, but that she would teach dual enrollment classes if the program were reformed.

Shortly after, Bullock was terminated. The stated cause was “refusal to accept one’s work assignment.” She appealed her termination twice, and was denied both times. She currently is waiting for CCC trustees to hear her case.

Bullock is not the only one with concerns about the dual enrollment program. Dr. BJ Zamora, former English department chair and CCC instructor (she recently retired), said in a Martin Center interview that she felt pressured to give students higher grades than they had earned. According to Zamora, the administration told the faculty that a community college is like a “business” and that the students are “customers.”

As mentioned earlier, CCC’s issues may not be limited to those involving the dual enrollment program. For example, a former IT employee, Mike Falls, wrote a letter to CCC trustees last December listing allegations of fraud, employee intimidation, data security risks, and even illicit behavior by the administration (Falls showed that president Steve Thornburg’s system password was a sexually inappropriate reference to the executive vice president, Dr. Shannon Kennedy).

Although Thornburg was recently fined over the password issue (the fine amount is not publicly available), it seems that trustees were mostly dismissive of Falls. They never interviewed him during their review of his allegations. In a Martin Center interview, board member Allen Langley justified that dismissiveness by accusing Falls of “criminal activity” and of “illegally” discovering the password by “hacking” into the system. Langley, however, offered no evidence to support such claims (Falls said he uncovered the password during a routine software update).

Ultimately, the board concluded that Falls’s other allegations were “resolved” or not true, but it appears that it only heard one side of the story—the administration’s.

Another case of possible misconduct involves a $13.2 million Department of Labor grant, awarded to CCC in 2013 to help it develop a new information technology curriculum. In a Martin Center interview, the grant’s former project manager, Mitch Sepaugh, alleged that Dr. Kennedy was not using the grant funds for the Labor Department’s intended purpose. Sepaugh says that after expressing his worries to the administration, he was removed as project manager and denied a renewal of his contract at CCC. All of his grievance appeals have been denied. Trustees told the Martin Center that they did not know why Sepaugh’s contract was not renewed.

Although it is possible that some of these allegations may be unfounded, it is troubling that trustees seem to regard them merely as the complaints of a few “disgruntled employees.” Such accusations should be taken seriously, and the individuals making them should be protected as potential whistleblowers and given a fair hearing. After all, recent scandals at other schools in North Carolina’s community college system, such as Martin Community College in Williamston, have illustrated the danger in turning a blind eye to administrative malfeasance.

In the case of the state’s dual enrollment program, such wrongdoing could impact more than school employees such as Ginger Bullock. High school students may be lulled into a false sense of academic accomplishment, only to learn later that they really aren’t prepared for more rigorous college coursework or career training. Those underprepared students are most likely to drop out and struggle with college loan debt.

If trustees aren’t willing to fully investigate potential whistleblower claims, which seems to be the case now, the onus is on North Carolina’s State Board of Community Colleges and other higher-level policymakers to do so. If that doesn’t happen, innocent college instructors may be mistreated, students may end up shortchanged, and taxpayer funds may be wasted on questionable or poorly managed programs.