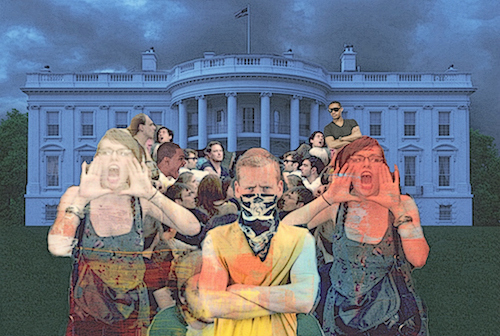 At this year’s Association of American Colleges and Universities meeting, held in late January in San Francisco, a sense of misgiving filled the conference hall.

Panelists raised, implicitly, the question whether higher education has become out of touch with Donald Trump’s America. They fretted over their belief that the current social and political climate is a threat to the liberal arts and, in a time of “fake news,” to the pursuit of truth itself.

The Association’s president, Lynn Pasquerella, concluded that it is the average American—giving in to the alleged anti-intellectualism of the day—who is misguided.

Higher education leaders, she argued, must therefore work to “destabilize the cultural attitudes at the basis of proposals that devalue liberal education.”

While there were some speakers who called for tolerance and understanding—including Wesleyan University president Michael Roth, who advocated greater respect for “traditional conservative religion and thought”—they were a mere footnote during the four-day gathering.

Rather, workshops such as “Reclaiming the Racial Narrative,” case studies on implementing progressive agendas on campus, and strategies on how to engage students in support of “racial and social justice” dominated the conference’s agenda.

Unfortunately, in these early days of Trump’s presidency, similar politicization seems to persist throughout much of academia. Many leftist students, faculty, and administrators pay only lip service to the notion that higher education should be a marketplace of ideas. They now seem to view themselves as combatants in an ideological war.

The recent rash of protests and temper tantrums in response to the President’s inauguration and policy proposals reveals continued allegiance not to civil discourse, but to identity politics and an intolerant strand of progressivism. Columbia University humanities professor Mark Lilla, writing in the New York Times last November, forcefully argued that such allegiance likely contributed to Democrats’ embarrassing defeat in the 2016 elections.

“[It] has produced a generation of liberals and progressives narcissistically unaware of conditions outside their self-defined groups, and indifferent to the task of reaching out to Americans in every walk of life,” he wrote.

In North Carolina, where progressive activists seem to control much of the campus political dialogue, it appears that the election offered no learning lessons. For example, when UNC-Chapel Hill students walked out of classes to protest President Trump’s inauguration, it was a struggle to keep the seemingly like-minded group members focused and united, as students argued over who had the right to be the most outraged.

One organizer was quoted by the Daily Tar Heel complaining about “problematic people” who “co-opted the space at times and didn’t really understand that it was not for them at this particular moment.” And when students began giving short speeches to voice their concerns about a Trump presidency, criticisms of “white America” and calls for dismantling “systems of oppression” were common refrains.

Furthermore, identity-obsessed lectures and workshops remain popular events across the University of North Carolina system. For example, at UNC-Chapel Hill, the Anthropology Department is hosting a “Race, Difference, Power” colloquium in early March.

At NC State, the GLBT center recently conducted two identity-based workshops: “What is racial justice?” and “Recognizing and Responding to Microaggressions.” A third, “Sitting With Privilege,” is scheduled for the end of March. And Duke and NC Central are partnering in late March to host a day-long conference titled “Let’s Talk Racism: Recognizing, Resisting, and Revising.”

To be sure, some in the campus community appear to be striving to understand alternative viewpoints and avoid the divisiveness of identity politics. For instance, the diversity office at NC State is hosting a workshop next week titled “Controversial Issues and Civil Dialogue,” which is designed to help participants “disagree without being disagreeable.”

Similarly, the Professional Development Center at Wake Forest University held a “Let’s Talk: A Current Political Dialogue” workshop at the end of January. However, for every workshop designed to help students engage with those with whom they disagree, there seems to be a dozen more teaching them about, for example, “correcting” microaggressions.

If there is a silver lining for North Carolinians, it is that the situation could be a lot worse, as evidenced by the ridiculous turns radical progressivism has taken elsewhere in the country. Barnard College, for instance, recently announced a promise to begin hiring professors based on skin color as part of its ongoing efforts to become a “more representative, inclusive, and equitable campus.”

And at Santa Clara University, the student government denied recognizing the campus’s Turning Point USA chapter as an official club, saying that the group’s pro-capitalist message was in conflict with the school’s mission and against its “humanity.”

Though one might be tempted to write off such narrow-minded thinking as representative of just a small percentage of campus leftists, it becomes hard to ignore when it turns dangerous.

For example, a planned appearance by the conservative Brietbart provocateur Milo Yiannopoulos at the University of California at Berkeley resulted in violent protests, leading to the event being canceled and over $100,000 in damage. Among some of the chants repeated by the roughly 1,500 protesters was “No safe space for racists.” And at New York University, eight protesters were arrested outside of a speaking event by conservative comedian Gavin McInnes.

The apparent breakdown of higher education’s marketplace of ideas seems to be spilling over more and more into the broader culture. For example, some conservatives in the San Francisco area are having to meet in secrecy, fearing even to tell their friends or family. As Bay Area resident Robert Ward described it, being a conservative is like “being a heretic” in some areas of California—a sad indication of how inhibited free and honest discussion has become.

At any rate, the more the intolerant Left ratchets up its efforts to censor and reproach those with alternative viewpoints, the more the general campus community—the reasonable majority—becomes alienated from them.

Speaking as a current UNC-Chapel Hill student, I can attest that most students—which even includes some of my friends who used to “Feel the Bern“—find the constant policing of “problematic language” and the progressive outrage machine to be tiresome and off-putting.

Any hope campus leftists have in terms of frustrating the goals of the Trump presidency relies on their ability to branch out to the reasonable majority. Unfortunately, they seem to be heading in the opposite direction, often with the tacit support and even direct involvement of faculty and administrators. One would think that all of their hysteria—which is truly anti-intellectual—would have to end someday. As of now, that time appears to be a long way off.