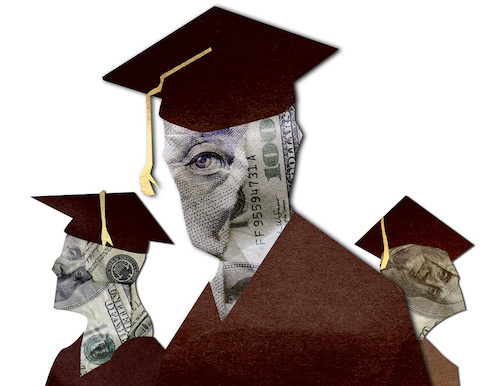 On December 19, the U.S. Department of Education announced that as of the end of the year, it would no longer allow students to use federal aid money at the Charlotte School of Law (CSL). The reason for this unprecedented move was the decision by the American Bar Association in November to place CSL on probation because of the low passage rate among its students on the most recent administration of the North Carolina bar exam.

Whether CSL will survive is not yet known, although it has announced that it will continue its scheduled spring semester. Whether it should survive is debatable. The question I want to explore is whether the Department’s decision to pull the plug on federal aid is a sensible one.

I have long argued that higher education is a “bubble,” which is to say that enrollments will eventually decline when people realize that the costs often exceed the benefits. The best example of that is law school.

For most of the last half century, law school was a growth industry. Legal jobs were plentiful and paid pretty well; sometimes spectacularly. More schools were founded and enrollments grew steadily. And then, around ten years ago, things began to change rapidly. Technology reduced the demand for time-absorbing legal research and consumers found that it was possible to do some work themselves that had formerly been done for them (at considerable expense) by lawyers.

Therefore, the market for legal education started to deflate. Law school enrollments peaked at just short of 38,000 in 2010 and since then have fallen by more than 30 percent. University of Colorado law professor Paul Campos put his finger on the problem when he said in this New York Times story, “People are coming to terms with the fact that this decline is a product of long-term structural changes that are not going away. It’s kind of a watershed moment.”

That watershed is having a tremendous impact on many law schools.

The high prestige law schools like Harvard, Yale, and Stanford hardly notice it, but as you go down the prestige list, schools are increasingly desperate to maintain their revenues. With fewer and fewer sharp students (as indicated by their scores on the Law School Admission Test, or LSAT) applying, lower-tier schools have largely chosen to accept students who would have been rejected in the past because of their low LSAT scores.

That has been the case at CSL. It was founded in 2006, received provisional American Bar Association accreditation in 2008 and full accreditation in 2011. Enrollment peaked at over 1,400 students in 2012, but is now down to 712. The school has been accepting more students with LSAT scores that put them at high risk of failing out or if they do graduate, not passing the bar. These data show that in 2010, the average LSAT score for its lowest quartile of students was 148; by 2016, that had fallen to 141. (A perfect score is 180 and the average is around 150.)

Reflecting the changes in its student body, the school’s bar passage rate, over 80 percent in 2010, has steadily fallen to just over 46 percent in 2016. Recent graduates have also found it difficult to land full-time jobs in the legal profession, with less than a quarter doing so; more than half are underemployed given their credentials.

CSL has a lot of company in the sinking low-tier law school boat.

As law school deans Craig Boise of Syracuse and Andrew Morriss of Texas A&M write, “In the face of a nationwide application slump, many law schools have admitted students with ever-lower LSAT scores—of all races and ethnicities—to prop up tuition revenue. They now seek to avoid accountability for the resulting poor bar passage results.”

But only CSL has been hit with the Education Department’s ultimate sanction, the loss of federal student aid.

In his statement on that, Under Secretary of Education Ted Mitchell said, “The ABA repeatedly found that Charlotte School of Law does not prepare students for participation in the legal profession.”

That’s a wild exaggeration. The ABA declared CSL not to be in compliance with its standards on legal education and student admissions in November, but the difference between being in or out of compliance is marginal. And if it were really true that the school does not prepare students for the legal profession, how could any of them have passed the bar exam and found legal jobs?

In the past, other law schools have been put on probation for the same apparent weaknesses in admitting and teaching their students. In 2005, Golden Gate Law School and Whittier Law School were put on ABA probation over low bar passage rates, but were given time to improve and got off probation. CSL wants the chance to do the same.

So why was the Department of Education so eager to administer a severe penalty that will disrupt many students and potentially prove fatal to the school?

The answer, I believe, is that the Obama Education Department, which has been on a crusade against for-profit education across the board, saw this as a final opportunity to take down what they consider an unwanted institution. Fresh off their annihilation of ITT Tech and the accrediting agency ACICS, the Department was not about to let CSL get away unscathed. With only one month left in power, the administration saw its chance and acted.

As was the case with ITT, the Department focused only on the bad aspects of CSL and ignored the good. Where the Department sees the side of the coin with low admission standards and weak results, others might view the opposite side and see an institution that gives students who probably couldn’t otherwise get into law school a chance to prove themselves. All of the students enrolled knowing that law school is hard and the bar exam the biggest intellectual challenge they’ve ever faced.

Some succeeded while others didn’t. That’s normal. But the Education Department takes the position that it’s the school’s obligation to ensure that the outcomes are good enough to satisfy it. If not, the administrative truncheons are used.

The complication is that most CSL students rely on federal aid. If they pile up huge student loan debts but can’t find jobs that pay well enough, they’re apt to default and leave the taxpayers with the expense. In justifying its action against CSL, the Department gave the need to “safeguard taxpayer dollars” as one of the reasons.

But if CSL goes under, many of the students who would have enrolled there will just find another law school willing to accept them. Eliminating one law school does nothing to solve the basic problem, which is that the output of law graduates is far in excess of the number of jobs in the legal profession.

Congress should change the law so that federal student aid money may not be used for law school. The schools will then compete as best they can for those students who can arrange to pay for their degrees with money from willing funders. No doubt there will be attrition among the law schools, but it will come from market competition, not bureaucratic diktats.