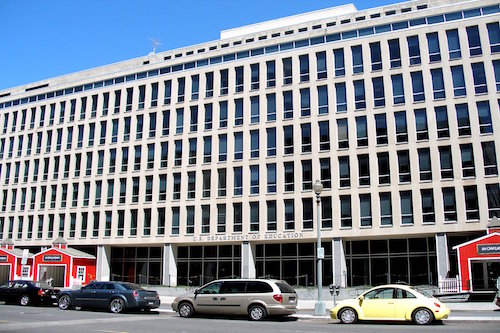 The final year of the U.S. Department of Education in the Obama administration is noteworthy for all its carnage. In September, the large ITT Tech chain of schools, which had operated in 38 states, was forced to close when Department officials shut off its access to federal student aid. That decision, which I wrote about here, disrupted the education of more than 40,000 students and cost 8,000 employees their jobs.

Almost inevitably, the Department then went after the organization that had put its stamp of approval on ITT Tech, the 104-year-old Accrediting Council of Independent Colleges and Schools (ACICS). Since ITT had been found bad, naturally the agency that had pronounced ITT good enough to receive federal student aid money must also be bad.

On September 22, the Education Department declared that ACICS was no longer recognized as an accrediting agency, meaning that federal funds could not go to the schools it had accredited. Because there is no other reason than that for them to want ACICS to puts its stamp of approval on them (and pay the associated fees), the Department’s decision is a death sentence for ACICS.

ACICS requested a review of that decision, but was denied in a letter dated December 12 by Secretary of Education John King. In reply to pleas by ACICS that it was on track to meet the various standards where Department officials had found it deficient and should be given more time, King wrote, “The failure by ACICS to efficiently monitor and enforce the required standards, and its lack of progress toward efficiently doing so, strongly indicates that ACICS cannot meet its ambitious promises to come into compliance with 12 months.”

Secretary King’s decision probably closes the matter. ACICS has, however, filed for a temporary restraining order in federal district court; if granted, it would buy the agency some time and perhaps a new, lifesaving analysis of its situation under the Trump administration’s Education Department.

What does the demise of ACICS mean?

For one thing, it leaves the numerous schools it had accredited without accreditation. The number of students enrolled in those schools is over 580,000. They’re studying such fields as medical assistance, business management, nursing, criminal justice, and culinary arts.

In its last appeal, ACICS attempted to use those students as human shields, arguing that their educations would be disrupted if the Department revoked its accrediting power. King dismissed that claim, saying that it was legally irrelevant and that ACICS didn’t have standing to raise possible damage to student welfare as a ground for a stay of execution.

In any case, the Department grants schools 18 months to find a new, recognized accrediting agency if theirs closes. So none will necessarily close and no students are certain to face disruption in their education. But other accreditors might look askance at some schools that had found a haven under ACICS.

For example, ACICS accredited the programs at Academy College in Bloomington, Minnesota, a 75-year-old school that offers training in aviation, business, accounting, and computer technology.

The school’s degrees and certificates are not inexpensive (an associate degree in accounting is expected to take 27 months to complete at a cost of over $40,000 including tuition, books, and supplies), but if prospective students want to find out how likely they are to finish on time and find a job after graduation, the site informs them, respectively, that since fewer than 10 students completed the program in 2014-15, the number who completed on time “has been withheld to preserve the confidentiality of the students” and that the job placement rate cannot be provided “due to privacy concerns.”

Academy College’s programs might or might not be worth what they cost and warrant accreditation, but if it can’t give students better information about their job prospects than that, other accreditors might decide that the fees they would earn by approving it are not worth the risk if the Department continues its crusade against dubious schools and their accreditors.

Thus, some ACICS schools may be pulled down in its undertow.

While Secretary King’s letter sets forth the failures of ACICS to comply with the federal regulatory criteria, it mentions in passing the fact that until recently ACICS was a recognized accreditor. In 2011, the group that evaluates accreditors, the National Advisory Committee on Institutional Quality and Integrity (NACIQI), recommended that the Department continue its recognition of ACICS. In 2013, NACIQI accepted its compliance report and recognition was extended.

So, how did ACICS go from good enough to merit continued recognition in 2013 to so far out of compliance that the Department sees no possible way for it to get back into compliance in a year? Did ACICS change?

No. What changed is that in the last two years, the Department has been on a mission to hunt down for-profit colleges, and now their accreditors. That is why ACICS was put under far more intense scrutiny than before and found wanting. Making an example of it, in the view of many in the higher education community, will help to clean up the dirty, disreputable for-profit corner.

Exemplifying that view, Betsy Mayotte, director of consumer outreach at the Center for Consumer Advocacy, said of Secretary King’s decision, “At a time when we are seeing many thousands of students incurring substantial financial damage as a result of their desire to achieve a higher education, it is crucial to restore integrity to the accreditation process. Too often, accrediting agencies have been the rubber stamp for federal aid at predatory higher education institutions.”

But it’s hard to see how killing ACICS will have much beneficial impact. That’s because the poor student outcomes at many of the ACICS schools can’t be fixed from the top, by even the strictest accreditor oversight. Colleges and trade schools like those that had been accredited by ACICS can’t be micromanaged into producing good results by distant organizations doing perfunctory campus visits every ten years.

The accreditation system itself is a very weak basis for determining which schools should be eligible for Pell Grants and federal loan money. Manhattan Institute scholar Preston Cooper nailed that point in his article “College Accreditors Get An F.” He showed that almost all of the recognized accreditors have given their approval to some dubious schools. The problem, he writes, is that “the federal government presents accreditation as a fail-safe barometer of college quality….”

ACICS’s demise will no doubt produce some temporary in terrorem effects, as the remaining accreditors try to look tough. (ACICS itself tried that when its existence was in danger, revoking accreditation from two small business colleges in Pennsylvania in September.) No doubt there will be an increase in accreditor sanctions against weak schools (mostly for their financial troubles) and a few more will have their accreditation revoked. But there won’t be very much of that because the accreditors derive their revenues from fees paid by their “member” schools.

None of that will affect the underlying problem, which is that the U.S. draws large numbers of academically disengaged, poorly motivated students into accredited colleges. Those schools take their grant and loan money, then try, with varying degrees of effort, to educate them.

Trying to improve our higher education system through tougher accreditation is like the way the Soviet Union used to try to improve its economy through new and better plans drawn up by apparatchiks in Moscow. The only solution in both cases is free market competition. For us, that means ending federal subsidies for college. When students have to spend their own money if they want education or training, the problem of “predatory” schools will disappear on its own.