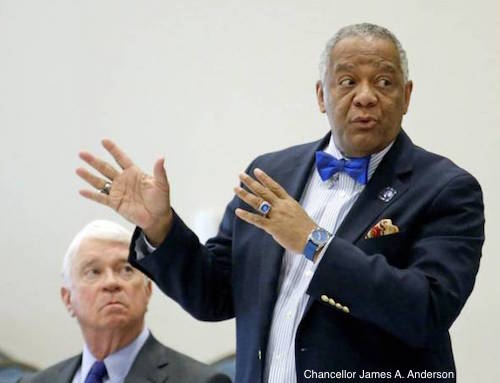 An unlikely champion of more university oversight emerged at a recent University of North Carolina system Board of Governors (BOG) meeting. During a discussion about the board’s long-term strategic goals on October 13, James A. Anderson, Chancellor of Fayetteville State University (FSU), urged board members to adopt more scrutiny over degree programs that fail to attract and successfully graduate students.

“You as the Board of Governors allow campuses to say, ‘We have low performing programs, but give us another two years to work on it.’ If over the last several years, you’ve had one major with one graduate, what makes you think that all of a sudden it’s going to be in high-demand and produce more graduates?” asked Anderson.

Anderson was referring to the biennial academic program review, which tasks the UNC system’s General Administration with evaluating the efficiency of every degree program offered at the system’s 16 schools. In total, the UNC system offers nearly 1,000 bachelor’s, 700 masters, and 200 doctoral degree programs. The administration conducted the last review in 2014 and will initiate the new cycle soon.

Such reviews are designed to produce a list of “low productive” degree programs. Currently, the general administration flags bachelor’s programs that have produced fewer than 11 graduates in the past year, have a current upper division enrollment of fewer than 26 students, and fewer than 21 graduates in the last two years. The thresholds used to evaluate master’s and doctoral programs are similar.

The BOG then has the authority to eliminate those programs, more closely monitor them, or allow them to continue if they are deemed vital to the mission of the university, of “high societal need,” or necessary to deliver “access and opportunity” to minority students. As the Pope Center previously reported, in 2014:

247 UNC system programs (undergraduate and graduate) were flagged as low-producing, but 200 of those were retained because the universities either had “plans to increase enrollment” or because the programs were related to the “core mission” of their respective university. Of the remaining 47 programs, 25 were flagged for a Board of Governors vote on discontinuation, and 22 were merged with other programs.

State law grants the BOG authority to “withdraw approval of any existing program if it appears that the program is unproductive, excessively costly, or unnecessarily duplicative.” In practice, however, the board has adopted a relatively loose oversight process, one in which individual campuses handle most of the decision-making.

When campus officials argue that some of their low productive programs are critical to the success of their universities and to the state, the BOG often makes exemptions without debating those claims’ legitimacy. As such, it has become more difficult to eliminate some underperforming programs, and taxpayers remain on the hook for them.

Unfortunately, it doesn’t appear that the BOG is poised to make meaningful changes to the review process. It recently approved a plan to pilot new thresholds that consider only the number of degrees awarded over five years, rather than the three-prong approach using two years’ worth of data. According to system leaders, this will result in roughly the same number of programs flagged for review.

But university officials seem to be overlooking an important point. Simply having an adequate number of students isn’t indicative of success. For example, a moderately popular degree program with 30 graduates a year and a large number of highly paid faculty members is no more economically efficient than a smaller program with fewer, lower-paid faculty members. A truly improved system would give policymakers more information about the resources needed to sustain degree programs.

When the BOG votes to discontinue a program, cost savings are not immediately apparent. An evaluation of every available program elimination since 2011 yielded no information about whether taxpayer money was saved or increased efficiency was achieved. And when asked by board members if eliminating a certain program would result in the elimination of faculty positions, university leaders often noted that the faculty would simply continue to teach their courses or shuffle into other programs.

Given the issues with the program elimination process, it makes sense for the BOG to pay more attention to the front-end of this process—when programs are initially approved.

Proposals to establish new programs are supposed to follow a rigorous application process. Institutions must provide proof of the following: demonstrated capacity of the institution to deliver a quality program, student demand for the program, societal demand (employment opportunities for graduates), budget and source of funding for the proposed program, collaboration possibilities with other degree programs within the system, and relationship of the new degree program with the university’s mission.

BOG members are supposed to review proposals and evaluate them according to the standards above. In some instances, however, programs are approved with little or no debate about their true merits. As a result, dubious programs have filtered through.

For instance, the Pope Center has found that taxpayers subsidize more than $50,000 per student enrolled in UNC-Chapel Hill’s Master of Fine Arts in Costume Production, a program with little benefit to the North Carolina workforce. An even more outlandish program is North Carolina State University’s Global Luxury Management program, which emphasizes “experiential learning” with trips to fashion boutiques in Europe and New York.

The purpose of the degree review process is to set boundaries on the types of programs that universities offer and provide better stewardship of taxpayer funds. Today, however, there is no clear-cut oversight process in place. In some instances, universities have been allowed to bypass system regulations and keep poorly performing programs; in other instances, officials have sidestepped the initial review process, which is designed to weed out dubious degree proposals.

Of course, giving some latitude to campuses makes sense, since department heads and other university leaders presumably have more intimate knowledge of degree program minutiae and the short- and long-term viability of their various offerings. But by granting too much leeway to university officials, system leaders have in some instances neglected their duty to the public—they’ve failed to curb the self-interest of faculty who control curricula and may sometimes have goals that don’t align with those of their respective universities or the system.

For FSU Chancellor James. A. Anderson, the solution lies in better oversight at the system level and the campus level. “The chancellor has to step in, [because faculty members] want us to invest a lot of money into experimental programs. But the market is not there,” he said, “If we keep doing the same things we’re doing, we’re going to keep getting the same results.”

History shows that, in terms of its degree review process, the UNC system’s Board of Governors has been at times willing to yield to pressure from campuses. While the efforts of Chancellor Anderson should be commended, it doesn’t follow that other chancellors in the system will soon adopt such a bold, reform-minded stance. As such, going forward, BOG members would do well to take greater ownership of the review process and ensure that degree offerings are more efficient and that there is a more transparent accounting of their costs and benefits.