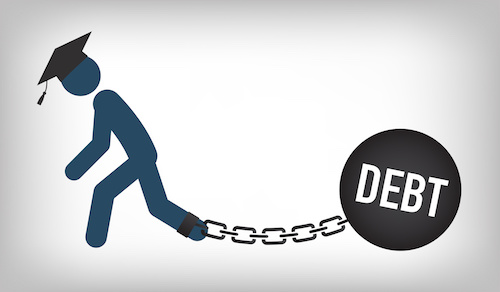 Many experts believe that the United States is facing a student loan crisis. Total student loan debt now exceeds $1.3 billion—more than total credit card debt for the country. And the average student loan debt at graduation has been growing steadily over the last two decades.

But not all students are part of the crisis. Nationally, student debt averaged $30,100 per borrower in the class of 2015. That’s a lot more than it was 10 years ago, but an affordable amount for students who graduate with good job prospects. Of all borrowers with loan debt in 2012, 70 percent had balances of less than $25,000, according to the Federal Reserve Bank of New York. Forty percent of borrowers had balances of less than $10,000.

Some students, however, run into significant difficulty repaying their loans. A 2015 report by the Brookings Institute explained: “The so-called student loan crisis in the U.S. is largely concentrated among non-traditional borrowers attending for-profit schools and other non-selective institutions, who have relatively weak educational outcomes and difficulty finding jobs after starting to repay their loans.”

These non-selective schools admit students unprepared for—or uninterested in—college level work. Then, once on campus, those students often learn very little and/or fail to graduate. So it’s unsurprising that their job prospects are poor upon leaving college.

The federal government has a new plan to help students who have attended some of those schools. Last month, the U.S. Department of Education released the final version of new regulations that will allow student loan borrowers to have their debt discharged—if they were victims of fraud or misrepresentation by their institutions.

This program will aid some students, particularly those who have attended the for-profit institutions targeted in recent years by the Education Department. But a better solution would be to stop non-selective and irresponsible universities from receiving federal student loan money in the first place.

Right now, the federal government uses the wrong tool to determine which universities ought to be eligible to accept students with federal student loans. Current law stipulates that a university’s cohort default rate (CDR) cannot exceed 30 percent for three consecutive years or 40 percent for one year. CDR is the share of borrowers leaving college who default on their student loans.

Data from North Carolina’s public universities is illustrative. As the table shows, 17.1 percent of Elizabeth City State University students default on their student loans within three years of leaving school. At the same time, only 40.6 percent are in repayment. That means that another 40 percent are either in deferment or forbearance—and may go on to default after the three-year measurement period is over. Non-selective schools in the University of North Carolina system have high cohort default rates. As Jay Schalin and I explained in this article, schools in the UNC system that admit students with low GPAs and SAT scores graduate too few students, and many of those students go on to default on their loans.

But there’s another problem: no school’s rates are high enough to trigger action by the Department of Education. (Keep in mind that default rates only show the number of students who default within three years. Many more default later.)

With major consequences tied to a school’s three year CDR and no institutional accountability for a borrower who defaults later, there’s a strong incentive for schools to game the system. By encouraging borrowers to pursue federal protections like forbearance and deferment—both of which may delay repayment until they have safely cleared the three-year window—colleges can easily avoid punishment.

The federal government and individual states must create a better plan to allocate student loan money and encourage schools to increase their standards. As New America advocates, the repayment rate must be a part of the equation at the federal level. But states can also use the information—to determine which schools need reform, to allocate performance funding, or to change admission standards.

For the UNC system, using repayment rates as a performance metric would make sense. The system’s Board of Governors is already in the process of reviewing the system’s standards and creating a new set of long-term strategic goals. Putting more emphasis on repayment rates could push universities to make valuable changes on their own, including strengthening admissions standards, improving academic quality, and rethinking student advising.

Changes at the state level could go a long way toward stopping non-selective and irresponsible universities from putting their students and graduates into debt with very little to show for it. University officials in North Carolina should work to lead the way.

Did You Know? Parental Income Across UNC Schools

Did You Know? The Struggle to Repay Student Loans