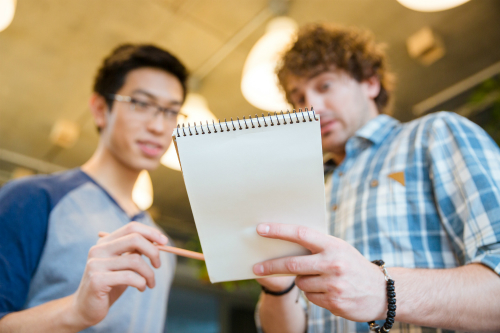 The humanities may not be dead, but they are certainly moribund on many college campuses. Once the crown jewels of higher education, now they are valued about as much as knockoffs at a pawn shop.

According to a recent study by the American Academy of Arts & Sciences, the humanities saw an 8.7 percent decline between 2012 and 2014 and, as a percentage of all bachelor’s degrees, are at their lowest point since 1967. Enrollment is down at the Ivies, in the Big Ten, and at Arts and Sciences colleges.  Even graduate programs are feeling the pinch.

Whatever the reasons for this decline, the fact remains: the humanities are hurting, and there’s no indication that they will experience a renaissance anytime soon.

As a dean at a college of agriculture and technology, whose field is history, I feel this keenly. Most students come to our college for specific programs because they have a career goal in mind. They don’t attend to explore or major in art, music, English, history, or philosophy—in fact, we don’t have majors in those subjects.

We offer some courses in them, which students take to meet general education requirements, but for most they are extraneous to what they want from college. In a recent campus survey, 70 percent said that those courses are important to their educational experience, but they also expect them to be easier than those in their programs, to do less work in them, and to be fun—diversions from the real work associated with getting their degrees.

To overcome such perceptions and stay viable, the humanities need to be relevant to students’ lives, not necessarily in the sense that they address contemporary issues, but in the sense that they must connect with what’s important to them. As James Zull writes in The Art of Changing the Brain, the best way to help students learn “is to find out what they want, and what they care about.”

Students need to think that the knowledge and wisdom of the humanities are worth pursuing. This puts the burden on us to make our subjects interesting and accessible, and demonstrate why they matter.

To have a real impact on today’s students, the humanities should be more hands on.

Students are more likely to become engaged and master subject content through direct application of the knowledge and skills they learn—what is commonly called applied learning. This can be done through various means: projects; independent or directed research; service learning; internships. The key thing is that students do more than simply attend lectures, read books, write papers, and take exams.

Applied learning is ancient wisdom. As Confucius said: “I hear and I forget. I see and I remember. I do and I understand.” It is also supported by modern research.

This past semester I decided to test the model of learning by doing in an upper-level humanities course. I teamed-up with a professor from our culinary program and offered an experimental course entitled “Founding Farmers.” The aim was to look at the agricultural, naturalist, and environmental views of George Washington, John Adams, Thomas Jefferson, and James Madison, and how those views helped  shape their political philosophy and vision for America.

The course also explored the myth of the American farmer as the backbone of American society—a view embedded in the American mindset and shared across the political spectrum—as well as by many of our students.

The basic text was Andrea Wulf’s Founding Gardeners: The Revolutionary Generation, Nature, and the Shaping of the American Nation—which inspired the course.

Students also read (in their entirety) and we discussed: John Locke’s’ Second Treatise of Civil Government; Jefferson’s “Summary View of the Rights of British America,” Notes on the State of Virginia, and First Inaugural Address; The Declaration of Independence, the U.S. Constitution, and the Northwest Ordinance of 1787; Washington’s First and Second Inaugural Addresses and his Farewell Address; and Alexander Hamilton’s Reports on Public Credit and Manufactures.

And they read and discussed hefty chunks from Crevecoeur’s Letters from an American Farmer, The Federalist Papers, the Journals of Lewis and Clark, and letters of the Founders.

In addition to studying the Agricultural Revolution in England and its impact on Colonial America, we looked at seventeenth- and eighteenth-century notions of natural rights, property, and liberty; the genesis of free labor ideology; Jefferson’s vision of a yeoman republic; Hamilton’s competing mercantilist vision; and American expansion in the early nineteenth century.

Three papers were assigned. For the third, students did primary-source research on agriculture, farming methods, or the types of food grown in the eighteenth and/or early nineteenth centuries, or another topic that related to the broader themes discussed in the course (e.g., the role of food in the economy and how it might have contributed to the development of the early republic).

The course exposed students to appropriate historical content and challenged them to develop skills in the close reading of texts, thinking critically, and writing. It also cultivated soft skills, such as collaboration and the ability to present their ideas in public. That was accomplished by having them prepare food based on their research and offering it for tasting at a culinary extravaganza.

At the extravaganza, they were expected to apply what they uncovered in their research—such things as the ingredients used to make what they prepared, why this type of food was eaten at the time, and how it related to the larger themes discussed in the course.

This component gave the students a taste of history (no pun intended) by providing a connection to the past not available by simply reading books and writing papers.

Although two students felt misled by the course title and withdrew because they expected less theory and more about farming, most of the feedback was positive. A student majoring in Information Technology, for example, said that the course engaged him mentally and intellectually in a way that the courses in his major did not.

All said that they enjoyed the culinary component and that the medium of food was a creative approach to get them to think about abstract concepts and see the relations between agriculture, politics, and society—much like the Founders themselves had done.

Admittedly, an applied approach might not work in some fields, but it could in others. In art history, for instance, students could actually do art and replicate the techniques they are studying. If taking a course on Shakespeare, they could write and perform their own Shakespearean play.

The experience reinforced my view that most undergraduates hunger for good examples and meaningful instruction because the “fast food” they are fed in many college courses leaves them unsatisfied. When we don’t give it to them, naturally they look elsewhere. Instead of blaming the students when our subjects fail to intrigue them, we should look at ourselves and think about how we can make what we teach more appetizing.

To do that—and save the humanities—we need to make them more hands on.

How Academe Helped to Elect Trump

To Save the Humanities, Make Them More Hands On

The Case for Older Students