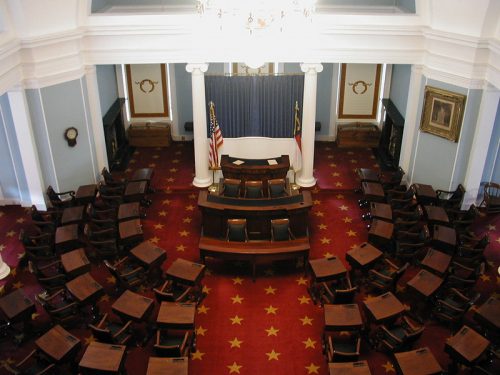 Some new faces might be on the UNC Board of Governors this year, as 12 members’ four-year terms are set to expire. The state’s Senate and House of Representatives will each be able to fill six open positions. They may choose to reappoint or replace current members.

The nomination process in the Senate is currently underway.

The Senate Select Committee on Nominations met on February 23 to consider Senate Resolution 111, a bill to “establish the procedure for nominating and electing members of the Board of Governors of the University of North Carolina.” The bill was adopted on February 24.

Senator Bill Rabon, the bill’s primary sponsor, emphasized that the nomination timeline outlined in the bill will be strictly followed and that there will be no exceptions. “This timeline is cast in stone,” Rabon said.

The nomination period opens March 1 and closes at 5 pm on Friday, March 5. Each senator may nominate one person for each position.

To be eligible for consideration, each nominee must complete a nomination form and file a North Carolina State Ethics Statement of Economic Interest (SEI) before the deadline. “The SEI is very important,” Rabon said.

The sponsoring senator must sign and hand-deliver all completed nominations to the Senate Principal Clerk by the March 5 deadline. “Hand-deliver; no email, no fax, no ‘I’ll have it there in a few minutes.’ Five o’clock comes one time on March 5,’” Rabon said.

A Chancellor Search Tainted with Suspicion and Shrouded in Secrecy