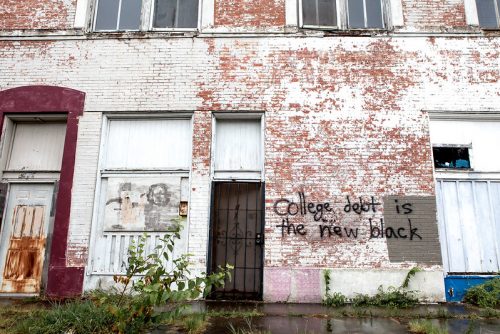 I can’t remember a single alternative to college proposed to me, for me, my entire school-age life. That I would go to college after high school was presented by adults and taken by me as a given.

How I would pay for it was always a thing to be figured out later. My mom had a modest state-based Tuition Assistance Program (TAP) account for me; it was assumed I would be awarded some merit-based scholarships, and whatever remained could be paid for with student loans. I started college in 2008; my freshman year required all of the TAP funds, a chunk of my mom’s 401k, a Pell Grant, federal loans, and a private loan.

Oh, and I guess I did get $750 from the school for academic achievement.

My story is an all-too-common one; the public policy of American higher education has left over 100,000 25-39 year-olds with some college, no degree, and, most likely, significant debt. Yet, in policy discussions, we rarely hear from this group. The problem goes deeper than student loan forgiveness.

I commuted to a school near home in Pennsylvania that year, so it took all of that money just for in-state tuition and fees. The next year, that money my mom had taken from her retirement savings would put us over the income threshold for a Pell Grant, and I transferred to an even more expensive private university in Washington, DC.

A year at the private school, and then I transferred again, staying in the DC area but moving to a slightly more affordable public university. I wasted credits every time I transferred—usually general education requirements for one school that didn’t fit the criteria of the next. Already annoyed with being required to take (and pay for) classes outside of my chosen areas of study, I opted to only take classes in my majors—anthropology and economics—in my first semester at the new school. This was the only semester I made the Dean’s List.

Eventually, I changed my economics major to a minor so I could finish a degree and get out of there as quickly as possible with something to show for it. That was 2012. It’s 2020 now, and I’ve been sitting with 119/120 credits toward my degree and three classes remaining since 2016. I’ve been working in the retail/service industry for four years and defaulting on my student loans as I struggle to get on my feet in Pennsylvania, living at home with my family.

Sometimes I think back to my freshman year of high school when the vocational/technical school gave a presentation to encourage students to sign up for vo-tech. I felt inspired by it and talked to my parents about their culinary program that night. The response I received wasn’t exactly “you’re too good to learn a skilled trade; you’re going to go to college,” but that’s what I took away from it. The next year, I doubled up in science and honors classes and chose extracurriculars that would boost my college application.

I have no interest in avoiding accountability for the decisions I made that got me to where I am: in debt, living at home, and without an undergraduate degree to show for it. For her part, my mom regrets enabling or not challenging my insistence to go deeper into debt.

But I have to give myself some space to reflect (or deflect) that the amount of foresight and self-knowledge required here is a bit of an unreasonable ask of 18 year-olds. They have been told that they’re bright for their entire lives and they must go to college so they can succeed—which, it turns out, was also a lie. I don’t blame them, but it didn’t help that my parents didn’t go to (or stay in) college and couldn’t offer much advice for choosing colleges, degree programs, and financing options.

Individuals carry responsibility for unwise decisions, but there’s a larger, institutional problem in education that comes from telling young people the only path to success is through college.

Some organizations, such as the mikeroweWORKS Foundation, are doing their best to promote non-college pathways to success. But the political discussion around higher education and student debt forgiveness spends too much time questioning the morality and intelligence of student debtors, rather than questioning the federal student loan system. Higher education depends on young people borrowing tens of thousands of dollars for college. Yet tens of thousands of them have little hope of completing a degree or repaying their debt.

Things need to change in the provision of higher education, to be sure, but that may need to begin with changes in our cultural attitudes toward having a college degree and, perhaps especially, toward not having one.

Educational attainment and the credentials that come with it are signals, whether or not they signal what one intends. Their absence is also a signal, even when we don’t equate holding a degree with holding job skills. I get it, to some degree; making a college degree a job requirement is or seems less risky to employers.

There’s a larger, institutional problem in education that comes from telling young people the only path to success is through college.

But how is that signal working out for employers? And how many people with college degrees feel tied to their underemployment because of their loans? Is the money they spent or the future they mortgaged for their degree worth the job market access it gave them? If credentialism is barely working out for graduates, imagine how well it’s going for the college “drop-outs” trying to pay off their loans while working at Starbucks or choosing not to have assets lest they be seized for repayment of unpaid and unpayable loans.

I do not want student loan forgiveness, at least not without the federal government exiting the student loan industry altogether, forever and ever, amen. But more than anything in terms of policy, I’d like to see more alternatives to college available to people leaving high school, and I’d like to see companies and organizations spend more time getting to know job candidates beyond the presence or absence of a degree on a resume.

One way to try to improve that rate is to make job interviews comprehensive by thinking through the specific capabilities and competencies a job requires and finding out how well potential employees can do the job instead of where they went to school. Except where needed for legal compliance, employers should stop requiring applicants to have a college degree, officially in job postings or de facto while sorting through applications.

What may seem like a costly lift on the front end of hiring could prove to be a wash when employers find better candidates because they think about what kind of person they need, rather than what resume they want. That’s not to mention the boon of different perspectives from people who have had non-standard professional backgrounds—but I’ll stop before this begins to read like a cover letter.

Megan Arnold is a writer and perpetual undergraduate based in Pennsylvania.

Money for Nothing: The Worst of Student Loan Debt Hits College Dropouts