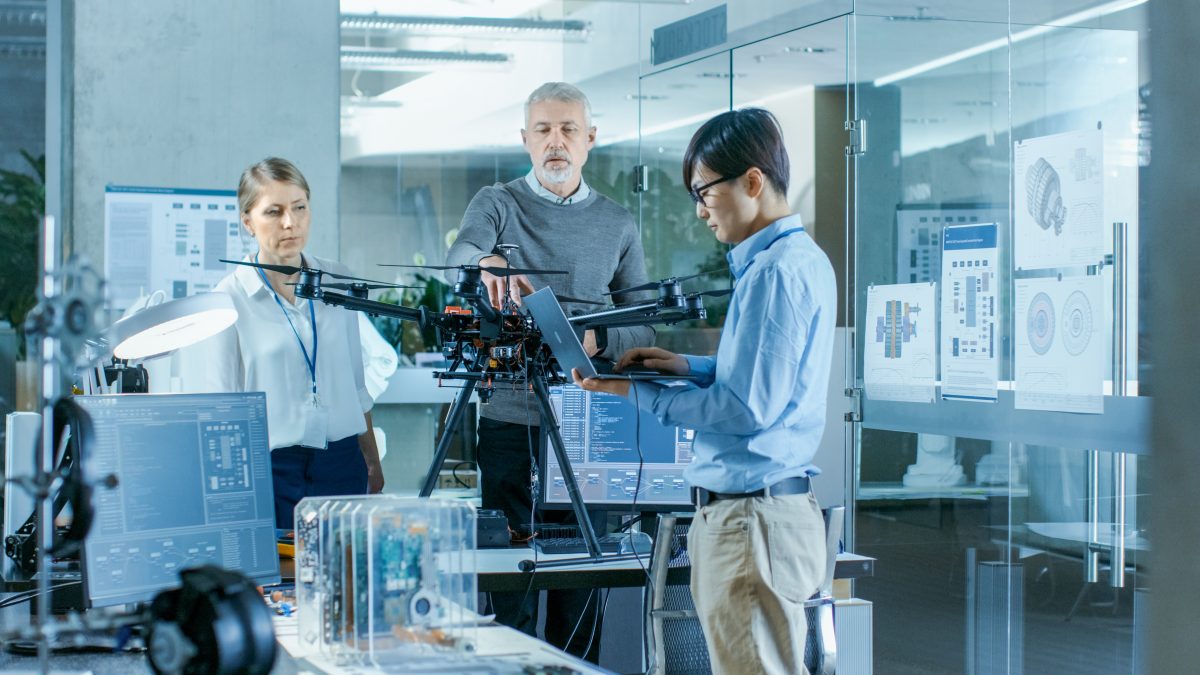 Miguel Urquiola is professor and chair of the department of economics at Columbia University. His special field is education and his book Markets, Minds, and Money: Why America Leads the World in University Research is about American higher education—its history, its relationship to higher education in Europe, and the trajectory it has followed from the first green shoots of the Ivy League.

Urquiola describes how the history of American universities put them on a path different from European universities, a path where economic forces could act in ways that allowed American institutions to diverge and, in the late 20th century, to become pre-eminent engines of scientific research.

This pre-eminence occurred despite statistics putting US scientific literacy well behind many European countries. For example, the second graph in the book shows PISA math scores for students from Germany, France, the UK, and the US: The US lags well behind in every year from 2003 to 2012. The first graph shows years of schooling: here the US leads. Despite more years of school, Americans do worse than the British, French, and Germans.

Nevertheless, something is working. The next graph in the book shows “the frequency with which Nobel winners’ biographies mention universities in different countries:” the US lagged massively in 1870, draws even in about 1920, and pulls way ahead thereafter. The US also leads in the number of science Nobels, but Urquiola’s point is that the work that contributes to the prize always occurs much earlier. The US leads in both.

By the 20th century, US higher education conformed to three principles, what Urquiola terms

To make his point, Urquiola traces the history of higher ed in the US from its beginning with Harvard in 1636, William and Mary, Yale, the University of Pennsylvania, Columbia, Princeton, and others. The land-grant colleges followed after the Civil War, and the growth of US academe accelerated to reach its contemporary peak of nearly 5,000 institutions.

Barriers to entry were modest and most of those institutions were essentially autonomous. The varied offerings of the schools conformed to what Urquiola calls free scope.

By contrast, universities in Germany, which was until the early 20th century a world leader in academic research, were all supported by the various states and were far from autonomous. After Germany came Britain, where Oxford and Cambridge retained some autonomy. But by 1910, US research output had overtaken Britain and France; Germany, of course, fell behind after World War II and has yet to fully recover.

In Urquiola’s view, the process that propelled the US to the front works like this:

As [economist Gary] Becker…pointed out …when people purchase schooling, they do not buy a consumer good like a phone—they make an investment to prepare for subsequent markets. For example, individuals go to school to prepare for a career, or to render themselves more attractive to potential partners. In other words, they see education creating an asset that Becker called human capital.

American colleges and universities compete in a more-or-less free market, says Urquiola. The bases for competition, however, are not what you might think. It isn’t the quality of teaching. Teaching effectiveness is highly variable.  Excellent researchers may be terrible teachers and there is no reliable way to evaluate teaching. So, institutions compete mostly on other grounds. 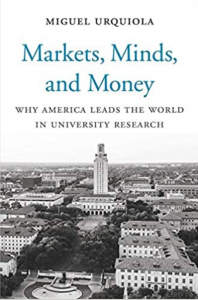 Most important is what Urquiola calls sorting. In the early days, the sorting was religious: Baptists wanted to go to a school with Baptists, Presbyterians with Presbyterians, and so on. This tendency led to massive growth in the number of colleges but, Urquiola argues, inhibited interest in research, which was costly and essentially irrelevant, having no bearing on students’ choice of school.

But as schools became more autonomous, sorting operated differently. After the Civil War, Cornell and Johns Hopkins broke ground by specializing in research and advanced instruction instead of denominational sorting. Harvard, Columbia, Chicago, MIT, Stanford, and others followed, realizing that they could best compete by hiring specialists who could both teach and do research.

As a description of what happened, that is accurate. But exactly why did the denomination of a school become less important and its research excellence more?

Perhaps it was the industrialization of society, with an increasing need for a diverse range of skills, that provided the market to which Harvard and the others responded by beefing up their research capability. Whatever the reasons, the attractiveness of a school came to increasingly depend on the new services it offered and the kind of students it could attract. The student population itself then became an attraction: like-seeking-like or -wannabe-like.

“Best” necessarily has different meanings in different schools. Now, Caltech just looks for the best techies; Harvard looks for the brightest, yes, but not just the brightest but also children of faculty and alumni, ensuring the loyalty of the former and the donations of the latter. Approved minorities must also be favored. Harvard (like many other elite schools) must therefore sometimes discriminate against the brightest—Jews and Asians, for example (clashing with its professed search for excellence tout court and leading to a lawsuit)—in favor of what it judges to be the “best” for its market niche.

Colleges began to behave like businesses. To succeed, they had to offer a varied set of services, which demanded specialized practitioners: faculty who also did research. The most successful at this process could then supply a different kind of sorting. The better schools picked the smartest, most successful faculty. The most brilliant faculty in a given area will render a university more attractive to others with similar interests.

Then, by being recognized as the “best” schools, they could sort—attract—the best students. In short, selection/sorting for excellence involves positive feedback. The result is a steep gradient, with a few institutions at the top and a long tail of those below.

Research is an elite activity. A handful of universities dwarf the rest in terms of research output. Poor scientific literacy in the mass of the population is irrelevant so long as the brightest fraction of students are well-educated and offered research opportunities.

The disparity between the best and the rest is a source of continuing tension in US higher education. It means that admissions officers are constantly trying to re-adjust a recipe whose ingredients are academic (SAT, grades), athleticism, legacy, “diversity,” and the probability that the applicant or their parents will be of some help to the school. Their oft-expressed aim is to promote social mobility while at the same time ensuring the financial future of the institution. The debate persists because the two objectives are partly incompatible.

The “positional stability” of elite institutions may allow them to “cheat,” as Urquiola suggests, to slight teaching in favor of research excellence. It also allows them to support luxurious facilities for undergraduates and a plethora of academically questionable but politically trendy academic programs.

Urquiola’s book makes sense of a complex issue: How the current state of academe in the US evolved from its humble beginnings.

Urquiola’s book makes sense of a complex issue: How the current state of academe in the US evolved from its humble beginnings and how that evolution led to a level of research excellence eventually exceeding that of European universities. His explanation that American colleges and universities competed in a more-or-less free market fashion rings true.

European universities certainly do many things right. For example, the faculty exert more control over the structure of the institution than in the US and play a role in student admissions, unlike in American schools. They probably select students who are better qualified academically than in the US, where other considerations—donor probability, athletic ability, “diversity,” etc.—loom larger. But control by faculty also makes the institution less flexible. Control by an independent administration makes it easier to create new programs and departments. Score one for the US (except for all those dodgy “studies” departments that are less prevalent in Europe).

I must disagree with Urquiola’s assumption that grant-supported research is a net cost. In my experience, administrators routinely urge faculty to get research grants, with their hefty “indirect cost” supplements, while simultaneously complaining about the cost of research. The occasional researcher who can manage without an external grant tends to be criticized rather than lauded. External research funds enable an institution to expand; they may also make a profit.

Also, Urquiola remarks briefly on the escalating fees for elite schools, attributing their rise to “changes in their product” and the Baumol effect, apparently forgetting demand and supply. Demand has increased partly because of federal loan largesse. The supply of elite schools is fixed and always will be. They are what economists call a positional good: No matter how many schools there are, the handful at the top will always have a special attraction. Given a fixed supply and growing demand, “we don’t want to leave money on the table!” as an administrative colleague of mine once remarked. No need to invoke Baumol.

What does Urquiola’s analysis predict? The future of academic research is probably safe—assuming that those elite universities survive the COVID crisis relatively unscathed. Their positional status (and the high fees that it permits), together with large research budgets, still allows them to “cheat” by downplaying teaching and by encouraging academic programs that seem more interested in political activism than scholarship.

Urquiola deserves credit for highlighting American academic research pre-eminence and giving a plausible description of the historical process that made it possible. Our higher education system is messy, but due to competition, it works rather well.