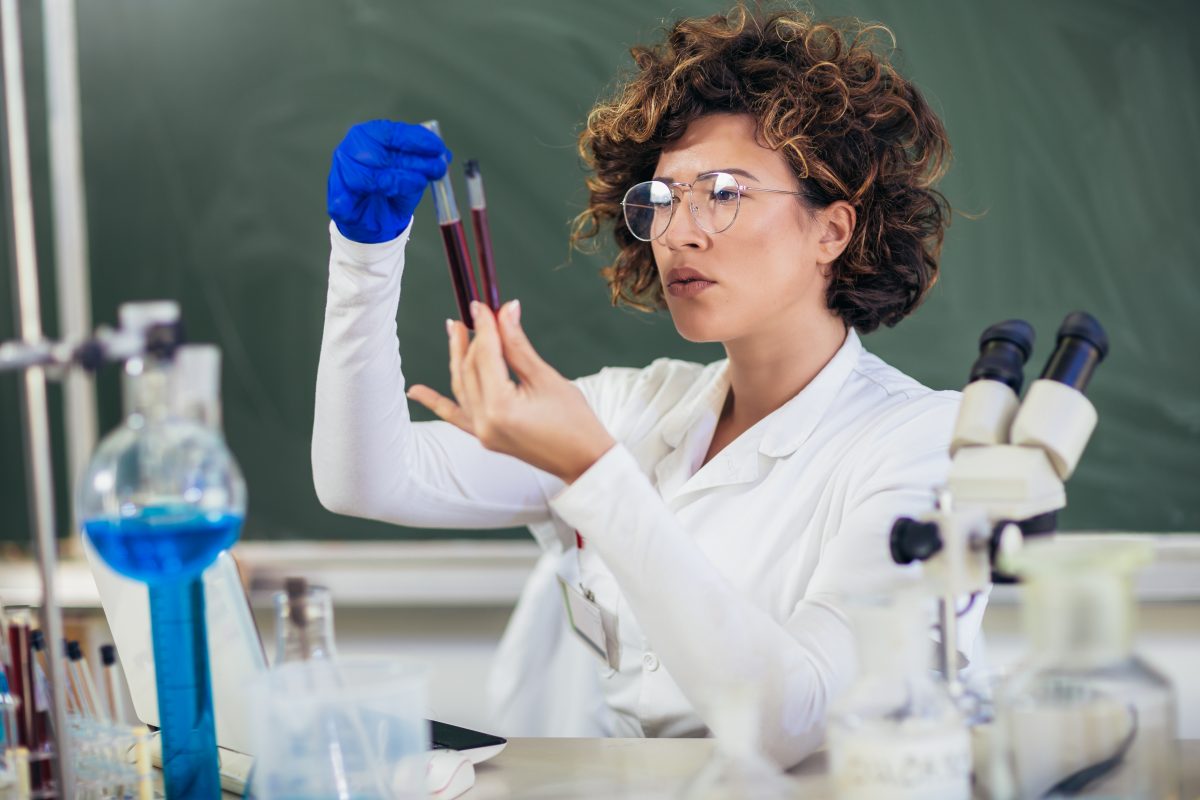 As a neurobiologist working at a local university for more than 30 years, I read Edward Archer’s provocative critique of scientific research with interest. We agree about a number of problems in the scientific enterprise, arising both from flaws inherent in people and from the sometimes-damaging pressures from funders and administrators whose goals aren’t focused on scientific discovery. Nevertheless, I believe Archer is mistaken in his main claim: U.S. science is not in intellectual decline, and evidence for moral decline is weak.

Most basic research in the biomedical sciences is supported by the National Institutes of Health (NIH) and led by professors who have received NIH grant awards for investigator-initiated research projects. Typically, a principal investigator (PI) experiences severe pressures, driven by the quest for discovery, as well as the need to get research funding (and often the desire for academic promotion).

Those pressures can be damaging to the PI and their staff and family, and may lead a few unbalanced scientists to engage in misconduct and commit fraud. The researcher’s university can drive much of that pressure. Over the past 50 years, research universities have become more and more reliant on the incidental government subsidies provided by the NIH to cover the “indirect costs” Archer mentions, as well as the “direct costs” that help to pay the salaries of academic scientists and their staff.

Not surprisingly, department chairs, deans, and others in the administration are eager for faculty to get more NIH money, and some researchers may spend more time chasing funding than doing research. However, Archer overstates the problem. Excessive “grantsmanship” is a real problem, but while it affects research faculty, it has little impact on students or their education.

Indirect costs may seem a cushy and perhaps illicit subsidy from the NIH, but biomedical research really does require buildings, libraries, technical services, personnel management, and many other services with real costs. Archer notes that 10 percent of universities receive 90 percent of NIH funding, citing this imbalance as evidence of corruption or misconduct. But he neglects to mention that most of the best research is performed in a small subset of institutions. Research funding is not a welfare program, and its allocation should be based not on need or on equality, but on merit.

Archer notes that from “1970 to 2010, as taxpayer funding for public health research increased 700 percent, the number of retractions of biomedical research articles increased more than 900 percent, with most due to misconduct.” Fraudulent research is of widespread concern within the biomedical community, but those statistics are misleading.

Archer neglects to correct for the three-fold increase in the total number of articles published in that interval, nor for the increased number of papers originating from non-Western countries (for which plagiarism is more common as Serena Stretton et al. of Australia’s ProScribe Medical Communications found), nor does he mention that scrutiny for misconduct has markedly intensified during that period, as Princeton University’s Charles Gross noted. Archer’s neglect of those confounding factors calls his conclusion into question. Since the number of retractions has increased just as critical scrutiny for misconduct and journals’ willingness to admit it has increased, it’s impossible to know whether the rate of scientific fraud in the U.S. is actually increasing, decreasing, or unchanging over time.

Likewise, he notes that “ubiquitous sexual harassment is also emblematic of the moral decline in academic science. The number of academics found responsible for sexual harassment has skyrocketed,“ but he disregards that conduct either ignored or considered acceptable in the past is no longer so. I suspect that sexual harassment in the U.S. has dropped precipitously over the past 30 years; Archer’s failure to mention that the bar for defining sexual harassment has lowered while its investigation has become more proactive suggests either disingenuous argument or fuzzy reasoning.

Archer notes possible causes of the decline in academic research, but his essay assumes that such a decline exists:

For most of the past century, the United States was the pre-eminent nation in science and technology. The evidence for that is beyond dispute: Since 1901, American researchers have won more Nobel prizes in medicine, chemistry, and physics than any other nation…it is not surprising that across the political landscape Americans consider the funding of scientific research to be both a source of pride and a worthy investment. Nevertheless, in his 1961 farewell address, President Dwight D. Eisenhower warned that the pursuit of government grants would have a corrupting influence on the scientific community.

He implies that Eisenhower’s warning was prophetic, suggesting that there was a decline after 1961. To test that claim, I counted the number of U.S. Nobel Prize winners in chemistry, physics, and medicine in 20-year blocks (the date of Eisenhower’s warning is shown by the black arrow). I conclude that Archer’s hypothesis is incorrect. 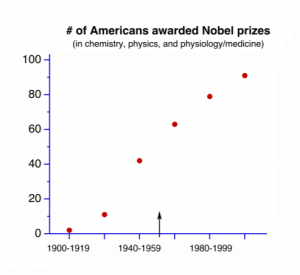 Of course, many “American” prizewinners were born in other countries (reflecting one of America’s enduring strengths), but the trend is obvious. Contrary to Archer’s claim, the data suggest instead that government support of science (which grew dramatically beginning in the 1950s after Sputnik) has enhanced the production of world-class science in the US, not degraded it. My opinion is widely shared in the international scientific community. For example, a 2016 study reports that “the pre-eminent role [of the US] is particularly marked in the life sciences and most health-related…fields.”

In summary, Dr. Archer’s essay is flawed. As a fellow researcher who has witnessed questionable funding decisions and has suffered occasional professional misfortunes arising from others’ errors or misjudgments, I can appreciate his outrage, but I believe that his essay is dangerously misleading in suggesting that increased governmental support for science has caused net damage to scientific research in the U.S.

To paraphrase Winston Churchill’s comment about democracy, the NIH extramural funding system is the worst system of supporting science, except for all the others.

The NIH system of awarding funds based on the advice of scientific peers who are asked to evaluate grant proposals is flawed. But to paraphrase Winston Churchill’s comment about democracy, the NIH extramural funding system is the worst system of supporting science, except for all the others.

There is room for improvement in the way science is supported, but this improvement requires a clear understanding of its current flaws and thoughtful consideration of possible remedies. The U.S. remains the world’s center for scientific research, and the notion that cutting governmental support will improve its performance seems misguided at best. America’s research community certainly owes a debt of gratitude to American taxpayers, but I believe that, over the long run, the current system of scientific funding has proved brilliantly successful and continues to repay the investment made by our country’s citizens.

Richard Weinberg is a professor in the Department of Cell Biology & Physiology at the University of North Carolina at Chapel Hill, where he conducts basic research in synaptic neuroscience. He received a PhD from the University of Washington in 1982.

–
Editor’s note: Below is a response from Edward Archer.

I read Dr. Weinberg’s critique and defense of the status quo with interest but was dismayed by his evasion of my argument and the use of unsupported opinion rather than fact. In my essay, I argued that academic research is intellectually and morally corrupt due to a lack of accountability, and offered 40+ links to primary research (including my own) and reputable sources for support. The strongest evidence is the “replication crisis” (i.e., the irreproducibility of research results), and cited my work in nutrition that showed how incompetence and fraud drive irreproducibility and meaningless studies. Yet on this ‘crisis’ of accountability, Weinberg was silent. However, he did offer his (unsupported) opinion on the moral decline stating: “Sexual harassment in the U.S. has dropped precipitously over the past 30 years.” Given that the number of women in STEM has increased exponentially over this period, Weinberg’s belief defies both common sense and the evidence.

In closing, Dr. Weinberg’s evasions and ‘evidence-free’ opinions are emblematic of the ubiquity of intellectual decline in academic discourse.