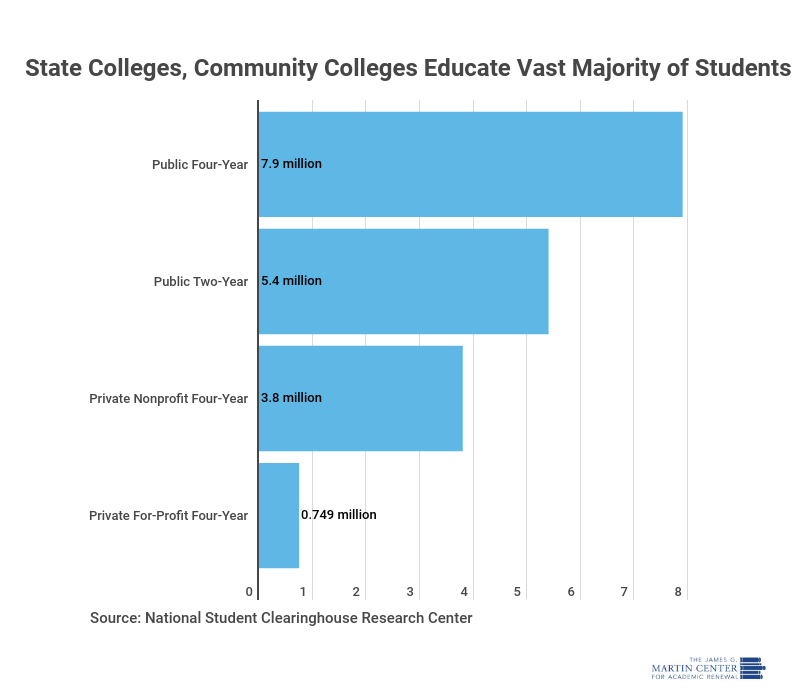 Doomsday predictions for higher education are a dime a dozen. The grandest claims expect “a handful of elite cyborg universities” to reshape a college education. Less-dire guesses see an end to the “buffet” of programs, extracurriculars, and university revenues common today. And pre-coronavirus visions of the future expected a variety of disruptions that failed to bring down the traditional two- and four-year degree.

For those trying to get a handle on the coming changes in higher ed, though, they need to understand where students actually attend college. Small, private schools and elite universities aren’t leading indicators. Instead, look toward state four-year colleges and community colleges.

Only 3.8 million students attended private four-year schools and another 750,000 students chose a for-profit four-year school. Even if the entire private sector in higher ed disappeared, the only changes most students would notice is that campus parking lots and classes are more crowded.

For public regional colleges that educate the most students, though, all is not rosy. The economic downturn has led to dramatic budget cuts, forcing struggling colleges to make decisions they hoped to avoid. Fearful of scaring away students, most colleges say they will offer in-person classes. The California State University system, which teaches 500,000 students at 23 campuses, is the only major public system that has announced it will go online for fall classes.

But some experts think telling students in-person fall classes will happen is unwise. Kevin R. McClure, an associate professor of higher education at the University of North Carolina-Wilmington, called announcements for in-person classes—when the future is so uncertain—“a colossal mistake.” If students put down a deposit to take in-person classes, and then university presidents announce an online semester, it could make students and parents feel hoodwinked.

The public won’t have much information on fall enrollments for a few more months. When it comes in, though, higher ed observers need to be mindful of trends at public colleges to have an idea of what future changes will look like. Extrapolating from elite private colleges would be a mistake.

Did You Know? COVID-19 Budget Cuts Hit Students and Profs, Not Admins