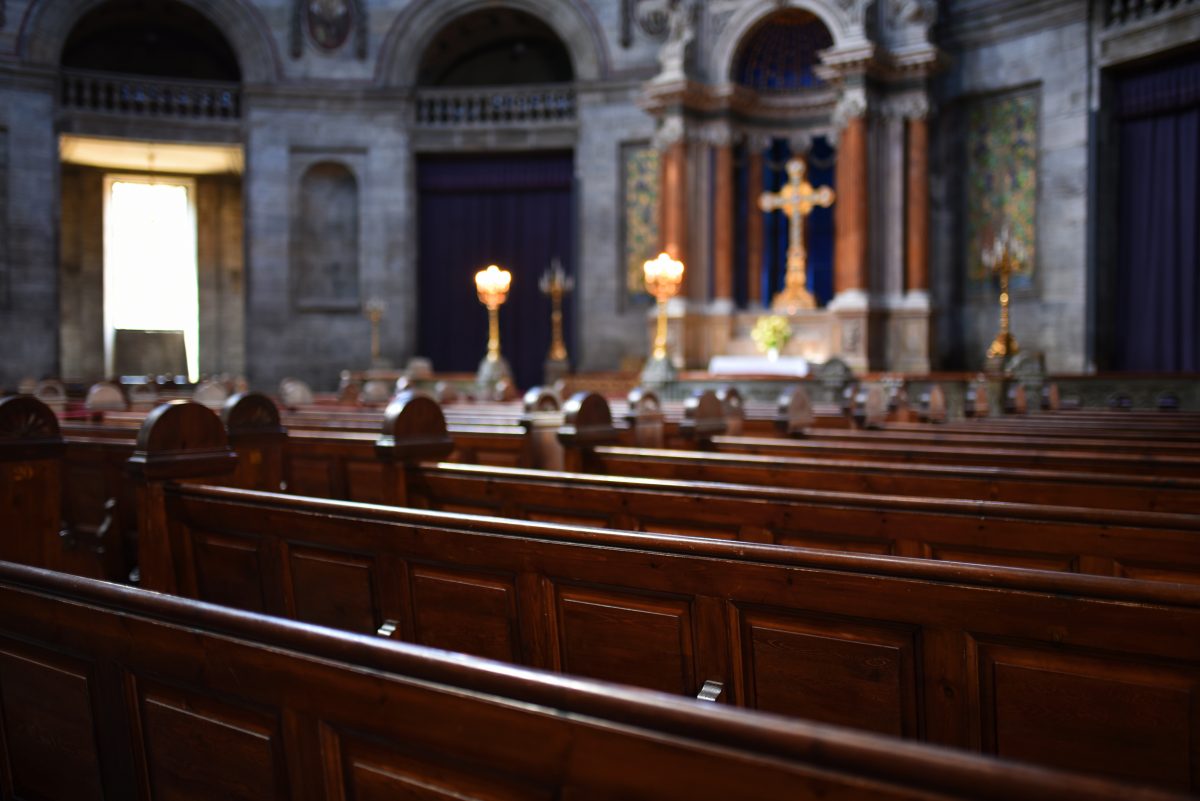 Many academic disciplines have gotten “woke” in recent years, especially in the humanities and social sciences. For the most part, this transformation has occurred in plain view as colleges created departments for (and offered degrees in) “Women’s and Gender Studies,” “Black Studies,” “LGBTQ Studies,” “Latino Studies,” and the rest of the intersectionality parade.

One discipline, however, sports an innocent-sounding moniker—“Religious Studies.” Studying religion would seem to be immune to the current trends in higher education, focusing instead on theological concerns.

That impression, however, is inaccurate. Religious studies—one of the most “woke” disciplines on America’s college campuses—is an ideological wolf in sheep’s clothing, luring students, parents, and alumni into a false sense of security.

In the innocuous guise of religious studies, many colleges and universities are promoting a leftist political agenda.

I discovered this recently when a local college invited a “religious studies” scholar to deliver a lecture on faith that turned out to be a Marxist critique of capitalism, with not a single word about God or the Bible. This episode was eye-opening, but unfortunately not an aberration.

To my surprise, the field of religious studies is no longer primarily about religion, but rather a radicalized amalgam of socialism, LGBTQ activism, and identity politics. Hundreds of schools, both private and public, offer degrees in “religious studies,” including many of the nation’s leading universities. No longer the exclusive domain of seminaries, divinity schools, and Bible colleges, religious studies is even taught at most Ivy League schools.

Perhaps because of the limited job market, relatively few students major in religious studies, but it is a popular elective. At Yale, for example, while the volume of religious studies degrees has declined to a trickle, enrollment in undergraduate courses offered by the religious studies department has increased over the past decade. A Yale official admitted that one reason for the increased popularity of religious studies classes is that they no longer focus primarily on Christianity and Judaism, and instead explore “a wide variety of cultural and religious traditions.”

Now, in the words of the Yale Daily News, “there is…no single dominant religious tradition in the curriculum.” The ecumenical—even secular—nature of religious studies is what appeals to students at Yale, one of whom explained that “The field itself really studies people; it studies everything.”

In other words, religious studies has become a potpourri of the latest progressive fads.

That transformation is both recent and profound. Historically, ordained clergy performed religious studies instruction at many colleges and universities, often from an explicitly devotional perspective, typically emphasizing the Bible and Christian doctrine. Even after this practice was discontinued at public institutions due to legal challenges, the perception remained that “religious studies is indistinguishable from religious practice.”

When religious studies was expanded to include other religions, such as Buddhism, Hinduism, and Islam, and then reimagined as a secularized comparative approach, it became an inter-disciplinary subject lacking any meaningful religious component. In the process, it became the perfect vehicle for indoctrination. One religious studies scholar admitted that his goal is to “train students to interact with the world in a responsible and informed way.”

This is the state of religious studies in a nutshell: The field is an academic invention with no established tenets, methodological consensus, or fixed pedagogy. A blank canvas disconnected from religion, religious studies has become a free-wheeling gestalt of leftist sociology, economics, history, anthropology, and philosophy. As such, it is the ideal platform for aspiring academics wishing to avoid a more rigorous specialty with recognized scholarly standards.

Religious studies courses are empty vessels ready to be filled with the instructors’ favorite flavor of progressive ideology. Students willing to parrot the professors’ views can bag a few easy credit hours.

Broad generalizations about religious studies must acknowledge that the field is not monolithic. The faculty and curriculum at, say, Liberty University are quite different than those at Yale. Overall, however, the professoriate teaching religious studies is quite skewed to the left, as evidenced by the field’s leading trade association, the American Academy of Religion. Founded in 1909 as the Association of Biblical Instructors in American Colleges and Secondary Schools, the organization sponsors an annual meeting—held in conjunction with Society of Biblical Literature—that it boasts is “the world’s largest gathering of scholars interested in the study of religion.”

The content of the joint AAR/SBL annual meetings, which attract upwards of 11,000 attendees, is very revealing.

In light of the economic populism evident in the Progressive-era Social Gospel movement, one might expect religious studies scholars to exhibit some modestly reformist attitudes, but the field is pre-occupied with radical LGBTQ themes. The annual meetings are organized in large part by AAR committees called “program units,” some of which have an explicit LGBTQ emphasis, such as “Gay Men and Religion,” “Lesbian-Feminisms and Religion,” and “Queer Studies and Religion.” Not surprisingly, the AAR/SBL annual meetings reflect this emphasis.

Religious studies courses are empty vessels ready to be filled with the instructors’ favorite flavor of progressive ideology.

The 2016 meeting featured more than 40 LGBTQ events. The presentations included these topics: “Ruth as Undocuqueer: Re-Reading the Book of Ruth at the Intersection of Queer and Postcolonial;” “Sarah, Sodom, and the Queering of Time in Genesis 18-19;” “Daniel 11:37 and the Invention of the Homosexual Antichrist;” “The Gospel and Acts of the Holy Ghost: Queer Spectrality, Affective Homohistory, and Luke-Acts;” and “Crucifixion’s Idolatrous Resonance: Animality, Slavery, and Sexuality in Pauline Rhetoric.”

The 2017 meeting, held in Boston, was similar, including a presentation on “Queering Martin Luther.” The agenda, however, was dominated by condemnation of President Trump. According to one report, “Trump was named in the AAR/SBL program 27 times. A book of essays, Faith and Resistance in the Age of Trump, was among the hottest sellers at the religion publishers’ exhibition hall…Trump was denounced as a danger to the values of free inquiry, diversity, inclusion and respect.”

The Boston meeting was also noteworthy for featuring a talk by the notorious Palestinian activist Linda Sarsour.

Earlier in its history, when the organization still focused on religion, the annual meetings were quite different. When the un-woke antecedent to AAR met in 1932, the proceedings included a “half-a-dozen addresses with such titles as ‘Recent Excavations in Palestine,’ ‘The Bible and Modern Education,’ ‘A School Principal’s Reactions to the Problems of Biblical Instruction,’ and so forth.” In other words, actual religious studies, focusing on the Bible. But in recent decades, the AAR has taken a hard-left turn, outpacing even the rest of the academy.

In addition to the LGBTQ agenda, religious studies scholars promote a litany of issues that coincide with the progressive wing of the Democratic Party: Marxism/socialism, immigration reform, climate change, criminal justice reform, and identity politics. The ideologues who preach this secular gospel of social justice are supported by a flotilla of sympathetic publications, such as The Immanent Frame, Religion and Politics, the Journal of Feminist Studies in Religion, Sojourners, and Religion Dispatches.

The connection to religion is often very loose, bordering on non-existent. One woke religious studies scholar describes herself this way: “I am a scholar of religion with particular interests in the history of capitalism and labor; religion in the Americas; feminist, queer, and critical race theory; and theory and method in the study of religion.”

On many university faculties, there is overlap between religious studies and, for example, African American studies. At Princeton, Eddie S. Glaude, Jr., a former president of the AAR, chairs the Department of African American Studies while also serving on the faculty of the Department of Religion. At the University of Texas, religious studies scholar Ashley Coleman Taylor describes her interests as “Black Feminism, Black Genders and Sexualities, Pragmatism, Queer of Color Critique, Africana Religions, Puerto Rican Studies, Atlanta Studies.” She is on the faculty of the Department of Religious Studies but also teaches in the Center for Women’s and Gender Studies. The disciplines are seemingly interchangeable.

Two decades ago, historian D.G. Hart called religious studies a “field in search of a rationale.” Hart opined further that religious studies, when unmoored from religious practice, became “rudderless, a discipline in search of an identity.” Sadly, in today’s woke academy the field has found a purpose—camouflage for progressive activism.

Mark Pulliam is an attorney and commentator living in eastern Tennessee. He is a graduate of the University of Texas School of Law.