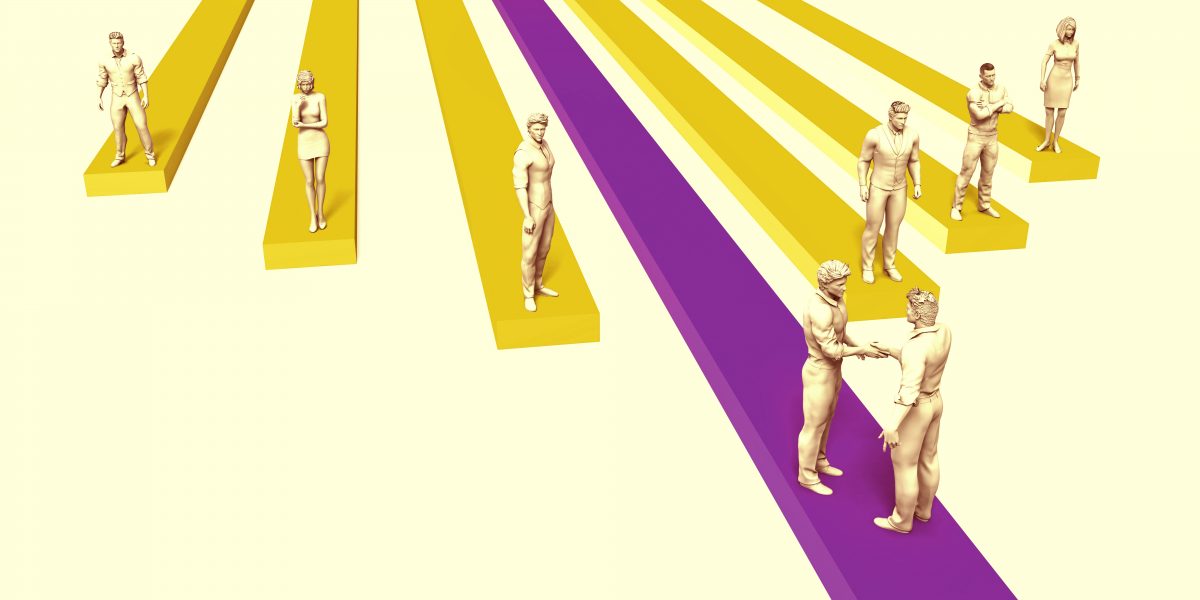 Is meritocracy just? Just a short time ago, it was commonly accepted that it is the fairest way to determine who wins and who loses in the competition of college admissions. Now, it is one of the most hotly debated questions in higher education. Some believe it is just, as it encapsulates the American dream of “work hard and achieve your educational goals.” Others, however, believe meritocracy is inherently unjust and view it as a cut-throat system rigged against the lower and middle classes.

So, how much should innate intelligence and academic performance factor into who gains admittance into college? Some answer that it should have everything—or at least almost everything—to do with getting into college. After all, it seems highly intuitive that colleges should admit only those students who are the most likely to flourish on their campuses while maintaining high standards.

But a growing number of people wonder whether other non-cognitive factors such as students’ extracurricular activities, life experiences, and ethnic backgrounds should be given greater weight. Others reject the concept of merit-based admissions altogether.

These issues and more were discussed and examined at a February 19 panel event at UNC-Chapel Hill,  organized by the university’s new Program in Public Discourse.

Williams was the only participant who supported meritocracy. The others raised three main objections against meritocracy. The first was offered by Zaloom. She prefaced her objections by stating that “meritocracy is the way into higher education—and really— government.” As such, she believes it is inherently unjust to require people to meet a set of arbitrary standards to climb the social, political, and economic ladder. She said she dislikes the idea of measuring people “on a scale of human value” and is concerned that participation in government is “dependent on achievement based on a hierarchy of values that someone may or may not have subscribed to in the first place.”

The most recurring concern among the panelists, however, was that a meritocratic system unfairly privileges the rich and well-connected. Indeed, some of the panelists claimed that gaining admission into a prestigious university isn’t about intellectual accomplishment, but economic advantage.

For example, Berg claimed that there is a “huge correlation” between students’ socioeconomic status and their ability to perform well on tests. Zaloom also argued that low-income students are shut out of elite universities. She said that the advantages of an elite education are “not equally distributed.” Zaloom continued: “We all know that the way to get your kid into college is to pay for a tutor, etc.”

Yet, despite Harvard’s high admission standards, Berg—a Harvard graduate—does not think the institution’s academics are particularly rigorous. She mocked the university’s introductory math course entitled “The Magic of Numbers,” and argued that there isn’t anything special about the institution’s teachers or classes. She said that the reason to go to Harvard isn’t to receive a stellar education but to gain social and political capital.

Berg, Douthat, and Zaloom expressed concern that a disproportionate number of wealthy people are admitted into prestigious universities because they see an Ivy League education as the golden ticket into the upper or “ruling class.” To them, the result of meritocratic college admissions is a society that stifles social mobility and destines the lower class to be forever ruled by the rich.

The third criticism, voiced by both Berg and Douthat, was that Ivy League and other prestigious colleges drain talent and ambition from local communities and concentrate the highly educated in dense geographic areas, mostly on the coasts. “The college-educated cluster together in geographic hubs in ways they did not 50 or 60 years ago,” Douthat said. “With that division comes economic and cultural stratification that is linked to populist disturbances on the right and the left alike.” He also disliked the idea of a “cognitive elite” that rules over the rest of the country. “Do we really want to be ruled by people with 1600 SATs?” he asked.

While there was no shortage of criticisms leveled at meritocracy, the critics didn’t propose many concrete alternatives to how college admissions should be conducted. Of the solutions that were offered, Berg’s was the most concrete—and also the most radical. She suggested that merit-based admissions be replaced with a lottery system.

“What would happen if you had a lottery admissions?” Berg asked rhetorically. “What effect would it have globally on the experience of people going to college?” She provided the answers:

First of all, everybody would calm down in high school…We would have an actual equal distribution of this amazing resource, we would have a much better way of having an actual representative population within colleges, and finally I think we’d have some chance of people appreciating the amazing privilege of higher education…we forget that it’s not something that we can perfectly earn.

In addition, Berg suggested that colleges need to rely on “human practical judgment” in college admissions by conducting in-person interviews. She also emphasized that academics, not administrators, should be the ones to make admissions decisions—arguing that they are better able to discern students’ full potential. Such an approach, in her view, is better than the “algorithm of the administrator,” by which she means the admissions officer who reviews test scores.

Berg’s proposal, clearly, is absurd. Her suggestions are a misguided attempt at social leveling—one that will do more harm than good. For one, her lottery-admission idea is unworkable because it disregards the fact that people are not equal in talents and interests—a point made by Harvard professor Steven Pinker in this New Republic article:

People vary in their innate and acquired intelligence, their taste for abstraction, their familiarity with literate culture, their priorities in life, and their personality traits relevant to learning. I could not offer a course in brain science or linguist theory to a representative sample of the college-age population without baffling many students at one end and boring an equal number at the other.

Furthermore, Berg’s other suggestion of replacing objective test-based measures of student aptitude with a more personal evaluation won’t have the egalitarian results that she imagines. On the contrary, abandoning objective measures in favor of a holistic evaluation of applicants disadvantages talented minority applicants who rely on standardized tests to demonstrate their ability—an argument made by Williams.

Williams, who is African American, said that his father grew up in the Jim Crow South, which certainly was not a meritocracy. Years later, he taught Williams and his other son “that knowledge and effort are the two most important powers of the oppressed.”

However, Williams explained that he couldn’t showcase his hard work simply by earning good grades. During his K-12 education, Williams did not have the opportunity to attend “a fancy prep school” that offered AP courses and resume-worthy extracurricular activities. He explained that even if he had a perfect GPA, it wouldn’t look as impressive as a perfect GPA from a competitive private school.

As such, Williams argued that the SAT was the only objective measure by which he could demonstrate his academic ability. Doing well on the SAT made him confident that he “wasn’t getting a handout” and that he could do as well as others who had more advantages than he had. Because of his test scores, he was able to attend and thrive at Georgetown University and New York University without feeling as if he did not deserve his spot. “It provides a lifeline for people who need to improve their circumstances,” he said.

Unlike Williams, Douthat was not so confident about merit-based admissions, and even suggested that systemic structural changes are necessary to make the admissions process more fair.

And while Douthat was clearly the biggest name on the panel, he was also the most incoherent.

We have a scenario where there are two questions: One is, are there ways to successfully either devolve or claim from below forms of power in our society that aren’t dependent on credentialism?

Douthat’s argument seems inconsistent. In his previous comments, he expressed concern about the rise in populism, which by definition is a way for ordinary people without high-end credentials to gain power against an elite. He continued:

And two: Is there a different kind of education that we could give to our meritocrats that might better equip them to govern the Western world slightly more effectively than the way it’s been governed in the last twenty years or so?

He is rather late to the game on this one. That question was answered long ago—yes, we need to stop educating young people to be socialists and moral relativists. And again, it seems strange that one would want to discard a basic principle of a free society—meritocracy—in order to make government operate “slightly more effectively.”

But his incoherence did not end there. While wondering if we should change the way our elites are educated to improve government, Douthat seems willing to accept that some institutions, like Harvard, aren’t really in the business of educating students. He suggests that their main goal is merely to “form elites” by functioning as a competitive social networking club. This is a valid critique, identifying a problem in need of correction. But Douthat thinks the Ivy League and other prestigious colleges should openly acknowledge this, and therefore should not prioritize merit in admissions. Instead of calling for reform, he seems content with Harvard’s academic mediocrity as the new normal. How, exactly, will that improve anything? And the world does not stay in one place; accepting mediocrity today means an inevitable gradual slide to even lower standards tomorrow.

There has been a groundswell of support in recent years for ending meritocracy in higher education. Perhaps the rise in anti-meritocracy rhetoric is due to the fact that people have lost sight of the ultimate goals of higher education: The acquisition and furthering of knowledge and the pursuit of the truth. While higher education can serve other goals, including opening the doors to the “elite class,” those other goals should be secondary to its primary educational mission.

In the end, admittance into universities like Harvard should be based primarily on demonstrated academic fitness and should be considered a noteworthy achievement—one that reflects the rigor and excellence such an education will demand of and impart to students. Instead of criticizing the advantages a Harvard education affords, critics should demand that it live up to the ideals of intellectual excellence it represents.

All in all, if the critics of meritocracy can’t present better arguments for ending it than Zaloom, Berg, and Douthat, maybe we should keep trying to let the hardest-working and most-talented people win, as best we can.