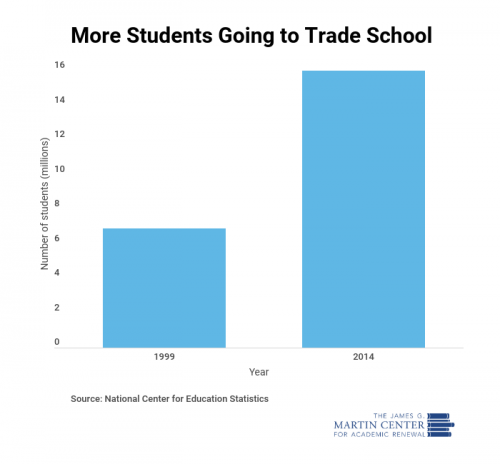 As students are pushed to attend college more than ever before, many of them are beginning to push back. Many students struggle with that predetermined outcome of their lives and have become more open to other options such as vocational education or trade schools.

For people with some college or an associate degree, the unemployment rate was 3.5 percent at the end of 2018, according to the U.S. Bureau of Labor Statistics. Workers used to hands-on labor or IT work have been thriving. Firms in the 1980s and 1990s faced a shortage of skilled workers and tradesmen, but vocational education has grown throughout the 21st century to meet this shortfall. In 1999, only 9.6 million students were in a trade school, but by 2014, this number increased to 16 million, according to the National Center for Education Statistics.

Forbes magazine interviewed “Dirty Jobs” host Mike Rowe in 2018 and noted that “over 80 percent of construction firms have reported they are having a hard time finding qualified workers to hire.”

Those high-paying jobs are left empty as high school graduates line up for a four-year degree. Rowe has since been an advocate or trade school, starting a scholarship program to fund students in a vocational program. The “Work Ethic Scholarship Program” recognizes those who understand the meaning of hard work and emphasizes its importance.

The Department of Education published a report that noted the projected growth in the jobs that don’t require a four-year degree:

Transportation industry employers are expected to hire and train roughly 4.6 million workers, an equivalent of 1.2 times the current workforce, to meet the needs of growth, retirement, and turnover in the next decade. Preliminary analysis indicates that projected annual job openings are 68 percent larger than annual completions of related educational programs across selected transportation occupational groups. This highlights a significant skills gap that must be addressed to meet expected industry demand.

Although a college education is still necessary for specific careers, The Atlantic states that some careers now “require specialized training in technology that bachelor’s programs are usually too broad to address.” One result has been that many vocational-education programs enroll students who already completed a bachelor’s degree so that students can learn coding and other tech skills. As the infrastructure, construction, and transportation fields are growing faster, four-year degrees are becoming less of a necessity, according to the Bureau of Labor Statistics. The bureau has projected that the “construction sector is to add 790,400 jobs from 2014 to 2024 to reach more than 6.9 million.” While that number does not make up for lost jobs since 2004, progress is certainly occurring.

If high schools introduce their students to the possibility of trade schools, young people can have more informed ideas about what to do after they earn their diplomas.