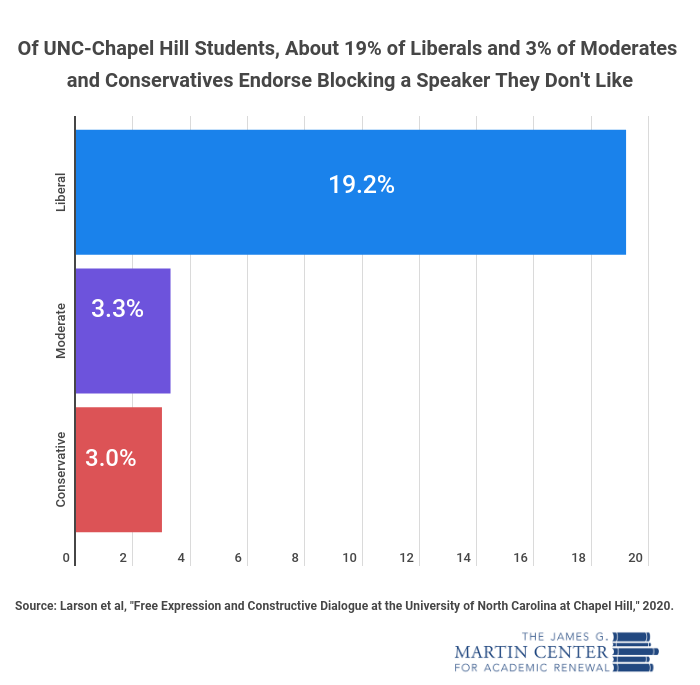 In the spring of 2019, three professors at the University of North Carolina-Chapel Hill conducted a study to understand free speech and constructive dialogue on campus. The study invited UNC students to complete a survey and attend focus group interviews with members of three different politically involved student organizations.

Those statistics are troubling. Even though the report shows that the majority of students overall (86.8%) would not block a speaker, students who want to silence others are often much more active on campus than those who wouldn’t block speakers; they often start protests and demand that the administration cave to their will (which it often does). But disagreement with a speaker does not give some students the right to veto or block a speech.  By excluding some political theories, students won’t understand American history and pressure other students who hold minority opinions to stay silent. It is of paramount importance for colleges to uphold the First Amendment on campus, where students expect to engage in political discussion and form their own ideas.

Biases about certain political ideologies can be formed without knowing much about them. Hearsay and ignorance turn any different ideas into something wrong or evil. When colleges take political thought seriously and organize events on important issues that force students to consider other opinions, civic dialogue can happen. Students have the chance to understand all views.

As the gap between the two political parties widens, the importance of understanding why people disagree with each other grows. In such a climate, protecting free expression is vital. “One need not accept all, or even most, of these ideas to recognize their credible intellectual history or to acknowledge that at least some merit robust discussion in a liberal arts education,” as the study’s authors wrote.

The study ended with recommendations to strengthen the atmosphere of political conversation on university campuses. First, university leaders need to remind students of the importance of free expression and teaching them how to engage in constructive dialogue. Developing skills such as listening, reflection, resilience, and constructive argumentation is crucial to understanding views around you. Students need to listen to understand rather than listen to respond. Other ideas, such as an orientation class that teaches the value of free expression and constructive dialogue, can set expectations for how students should conduct themselves on campus.

However colleges approach the issue, they need to insist on acting in ways that show fidelity to the Constitutional rights of students and faculty.