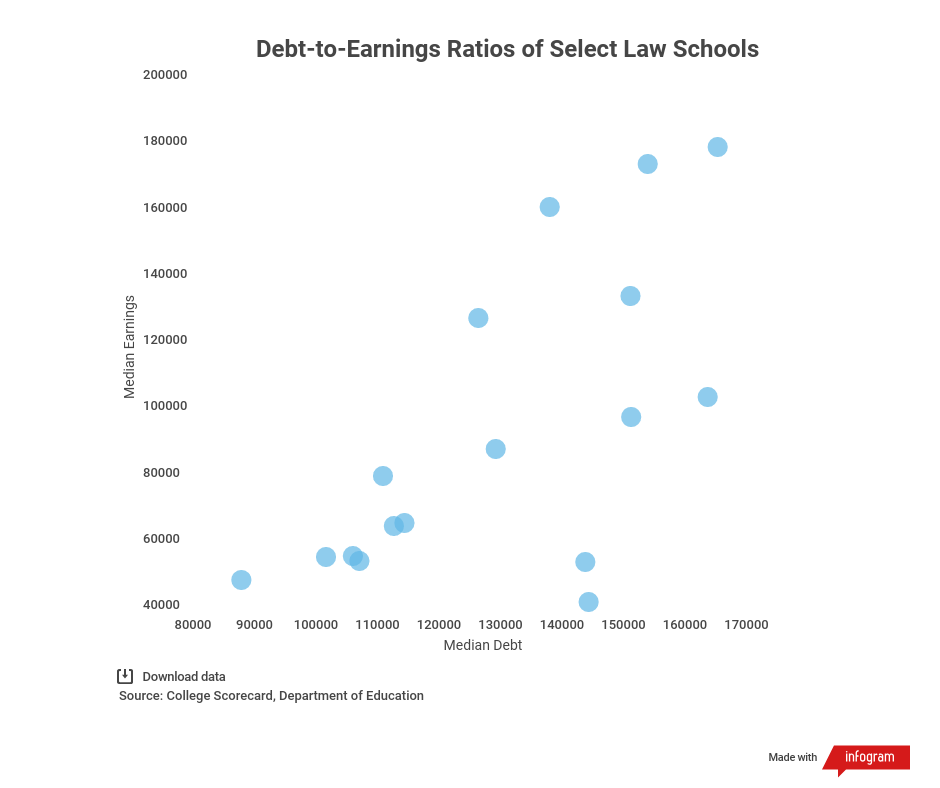 New improvements in the College Scorecard data from the U.S. Department of Education have shown some of the specifics for how well degrees pay off. With those improvements, the public can see the median debt totals as well as the median earnings after a graduate’s first year in the labor force.

Since 2008, for instance, there has been a 15 percent increase in the number of lawyers in the United States, according to the American Bar Association. That increase has led higher education critics to ponder whether the payoff of law school is worth the high levels of debt required for a law degree.

As a law degree is neither cheap nor easy to obtain. Students are sometimes mesmerized by private law schools, which can cost up to $200,000 for a degree—not including living expenses.

What benefits do those elite law schools provide that attracts students? Although their tuition is usually quite costly, their median earnings after graduation certainly provide some initiative. The median graduate debt from Duke law school is $138,000, but their low debt-to-earnings ratio means that students quickly repay their debt.

With the help of the improvements of the college scorecard, the Martin Center has put together a list of 20 popular law schools, including schools in North Carolina as well as possible choices for undergraduate students in NC who desire to move out of state.

Out of the 20 law schools analyzed by the Martin Center, Duke University had the lowest debt-to-earnings ratio. Next was Cornell University, followed by Yale University and Columbia University. The median salary for Columbia graduates is about $180,000, beating Yale’s median of $128,000.

Although Duke is not an Ivy League school like Columbia and Yale, it still surpasses them with a better debt-to-earnings ratio. When undergrads search for their perfect law school, they should keep in mind that earnings aren’t the only important measure of a law school: the cost of the school matters as well. Private or public school competitors may be just as good as an elite law degree.

The data can also be downloaded from the table embedded below: