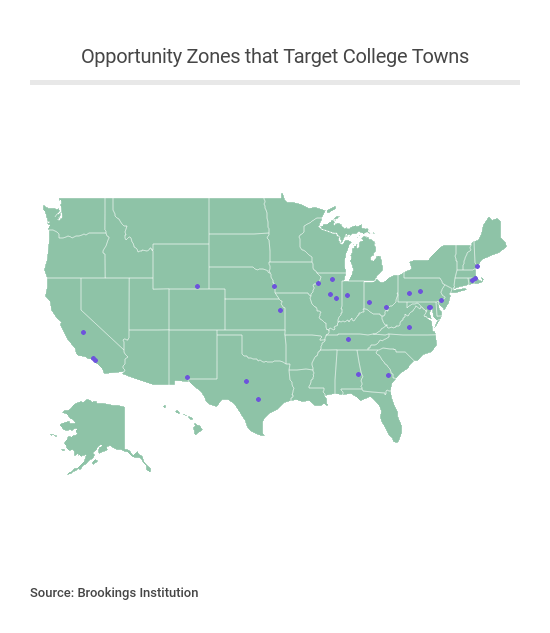 “Opportunity zones,” defined by a 2017 law, are poor areas targeted by the federal government for economic investment.

In a study by the Brookings Institution, researchers discovered that money intended for economically struggling areas was funneled to college towns instead. Though college towns have many unemployed, poor adults—known as students—they don’t tend to be economically depressed. As Hilary Gelfond and Adam Looney noted for Brookings, “57 percent of all neighborhoods in America qualified—and not all were truly distressed.”

As a result of the flexible definitions and poor geographic targeting, the program hasn’t lived up to its hype.

Opportunity zones weren’t meant to be another subsidy to college campuses, but the program gave states too much discretion in choosing which neighborhoods qualified for funds. According to the law, governors may nominate neighborhoods as opportunity zones for approval by the Department of the Treasury. Governors were supposed to focus on areas that were the focus of local, state, or private initiatives to attract businesses. Then, after the Treasury chooses the zones, the funding follows.

Poor residents, however, have not seen the benefits promised by opportunity zone supporters. Brookings recommended that legislators better define what, exactly, economic distress is and to raise the bar for what qualifies as “distressed.” Limiting state governments from choosing non-poor neighborhoods is also key. Legislators shouldn’t get the chance to abuse opportunity zones to grab more funding for their political districts.

Kentucky senator Rand Paul claimed that opportunity zones would be the largest anti-poverty initiative since the War on Poverty and allow impoverished areas to grow without the burden of harmful taxes and regulations. When the idea became reality, though, the payoff wasn’t so high. Instead, college towns benefited while distressed areas of America lost out.