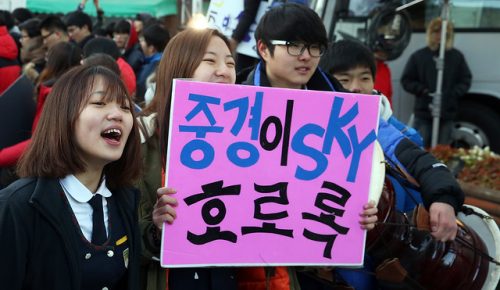 More advanced societies tend to have more educated citizens, which is one reason why politicians of all stripes call for sending more students to college. One country has taken that impulse to its logical extreme—but has found that more is not always better.

South Korea has a more educated population than any other country in the developed world. Seventy percent of young Koreans (ages 25-34) have completed some higher education, and a similar proportion of high school graduates continue on to college or university each year. By contrast, only 49 percent of young Americans have a degree beyond high school. The rich-world average is just 44 percent. 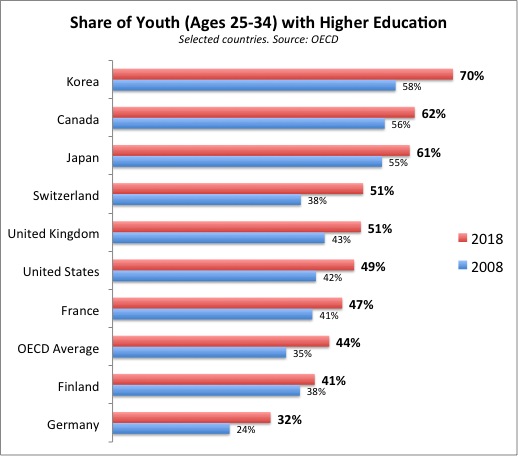 In every advanced nation, university graduates out-earn those with only a high school degree. But when the number of workers with a university degree rises, the number of university-level jobs often doesn’t keep pace. Korea’s glut of educated workers means that those with higher degrees earn just 24 percent more than high school graduates, compared to a 69 percent earnings boost in the United States. And in a stunning reversal of a near-universal norm, young Koreans with a university degree have a higher unemployment rate than their less-educated peers.

“High youth unemployment [in Korea] is reflective of a structural, supply-demand mismatch in the labor market,” reports economist Tieying Ma in an interview with The Wall Street Journal. The World Economic Forum estimates that nearly half of Koreans are overqualified for their jobs. Yet at the same time, employers clamor that universities gloss over many practical skills that the Korean labor market desperately needs.

Ironically, while left-wing politicians argue that America can boost its college attainment rate by making public universities tuition-free, South Korea became the most educated country in the world by following the opposite model.

Unlike the United States and most European nations, a majority of Korean students attend an independent private university. Though universities receive significant direct subsidies from the central government, tuition at both public and private institutions still costs thousands of U.S. dollars per year.

As I wrote in an American Enterprise Institute report last month, the right to charge tuition gives institutions a revenue source other than government funding, allowing them to more effectively meet student demand for degrees.

Tuition-charging countries like Korea and the United States tend to produce more graduates than the “free college” nations of northern and central Europe. For nations with a strong cultural affinity for education, the demand-driven model of tuition paired with government subsidies is a recipe for stratospheric college attainment.

Korea’s love affair with education is often traced to the end of World War II when the country emerged from decades of Japanese colonial rule as an impoverished, agricultural nation where barely one in five adults were literate. During the colonial period, Japanese policy allowed Korea just one university. But as rapid industrialization boosted the standard of living to rich-world levels, parents, guided by a Confucian tradition that emphasizes education, began to spend small fortunes out-of-pocket on their children’s schooling. Hundreds of universities, public and private, bloomed.

Preparation for university starts at early ages. Most parents send their children to hagwon, private tutoring centers that prepare students for high-stakes exams that determine their educational and economic futures. Between hagwon and traditional schooling, education can consume close to every waking hour of a Korean child’s time, as well as a hefty portion of the household budget.

A 2016 survey found that 83 percent of five-year-old Korean children attend hagwon, with the typical student attending the tutoring sessions five times a week for 50 minutes per session. At older ages, hagwon have been blamed for high rates of depression and suicide among Korean teenagers. So pervasive are the schools that the government felt the need to ban hagwon sessions after 10 p.m., and state agents patrol key neighborhoods (such as Seoul’s Gangnam district of K-Pop fame) after dark, looking for illegal tutoring rings to bust.

Hagwon tutoring culminates in the Suneung, a national college-entrance exam so revered that authorities halt air traffic in the country during portions of the test so students can focus. Suneung scores help determine which institution students will attend in Korea’s tiered higher education system. The big three “SKY” universities (Seoul National University, Korea University, and Yonsei University), which churn out most of the nation’s political and business leaders, offer the most-coveted spots but accept only a small fraction of students.

Korea’s love for education is reflected in the vast sums parents spend out of pocket on schooling, in addition to the government’s substantial contribution. But much of Korea’s spending on education is inefficient, if not downright wasteful. Shelling out millions of Korean won on private tutoring and expensive universities might give your own child a leg up, but too often, that just comes at the expense of another student.

With places at top-tier universities limited and the labor market suffering from an oversupply of university-educated workers, spending more and studying more will not move the economy forward. As one Korea Herald writer opines: “Academic inflation has effectively devalued actual experience on the job and undermined diplomas earned from all but the most prestigious institutes.”

But much of Korea’s spending on education is inefficient, if not downright wasteful.

The central government recognizes what ails Korea’s education system, but many of the reforms it proposes are top-down. Many of the reforms don’t address the roots of Korean credentialism, and some—such as forcing universities to admit more applicants on the basis of standardized tests—may backfire.

A more promising avenue is to give students more choices. Currently, vocational education is enjoying a renaissance in Korea.

In 2010, Korea introduced Meister schools, vocational high schools inspired by Germany’s vaunted apprenticeship programs. Meister schools have more autonomy than other schools and work closely with industry to train students with in-demand skills. Students have a direct track into relevant jobs and are barred from pursuing university for three years after graduation. Meister schools receive more funding than regular high schools and land students in jobs at sought-after companies such as Samsung. Proponents hope this will destigmatize vocational education and lure students away from the university track.

Lee Ju-Ho, another former education minister who oversaw the introduction of Meister schools, hopes they can help tackle Korea’s university obsession. “Vocational education can provide alternative options for students who do not go to universities and have different talents,” he said in an interview with Today. “If there is no well-developed vocational and technical education in the system, you will have only vertical differentiation ending up with first-tier, second-tier universities.”

Advocates should be careful not to oversell Meister schools, though. They’re expensive to run and still account for a small share of students. And the close association between taxpayer-funded schools and specific companies raises the cronyism concern that schools will train students for the needs of certain businesses, not the needs of the whole economy.

Still, vocational education offers Korea a promising route out of the quagmire that its higher education glut has created. The United States should watch Korea’s path forward carefully.

Korea is a nation where the standard belief has become that college is the only path to economic prosperity, which has shortchanged an economy desperately in need of practically skilled workers and bolstered the prestige of a small group of elite universities. Sound familiar?

Preston Cooper is a higher education analyst and a PhD student at George Mason University.