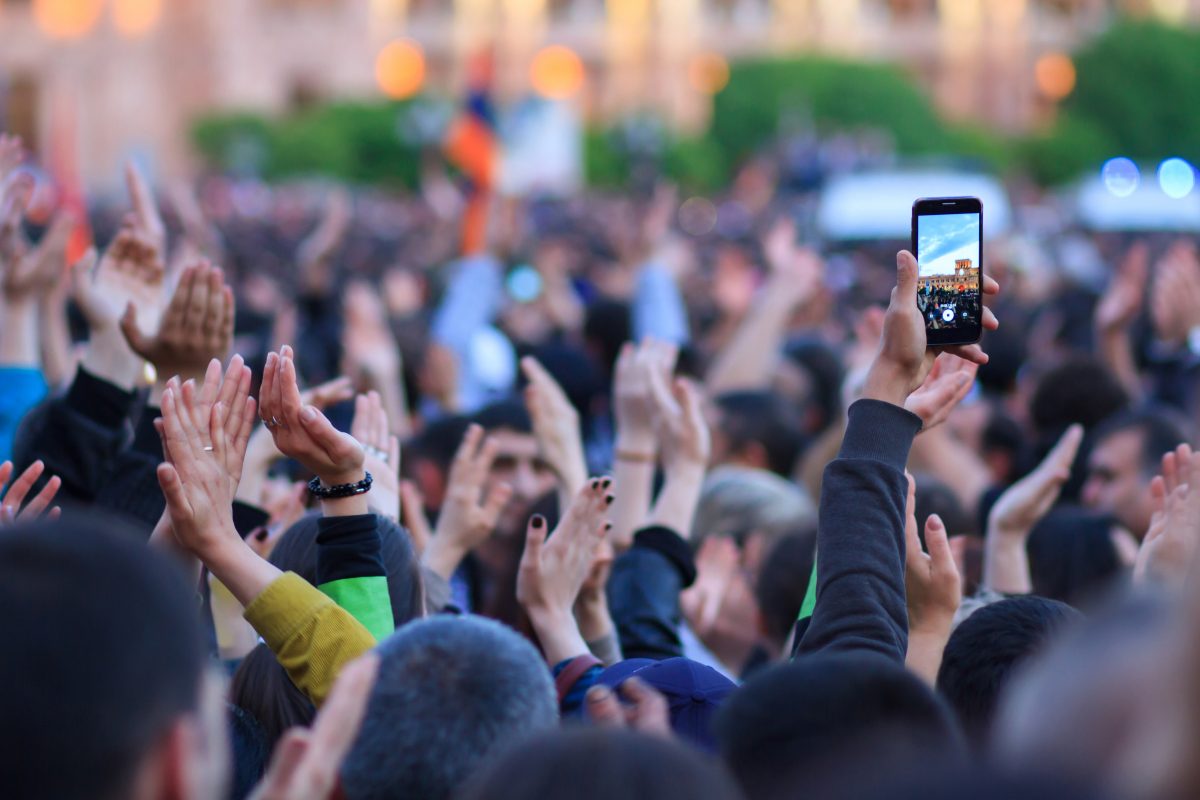 A certain anger at society seems to pervade the academy today. Hardly a week goes by without hearing about outraged students either demanding recompense for some perceived injustice or attempting to shut down an invited speaker. Between professors who spread neo-Marxist ideologies, administrators who enforce an extreme political correctness on campus, and peer pressure to be politically “woke,” student radicalism is reinforced from all sides.

The fundamental cause of this anger is more likely psychological rather than political. In his new book Panic Attack: Young Radicals in the Age of Trump, journalist Robby Soave highlights young activists’ destructive behaviors and provides an in-depth analysis of the activists’ motivations and the philosophical origins of their ideology. Soave explains the purpose of his book is to provide a comprehensive “psychological profile” of the young activist generations—millennials and generation Zers—whom he refers to collectively as “zillenials.”

Soave dedicates the majority of his book to analyzing left-wing activists, not because he considers them to be worse than their far-right counterparts—the alt-right—but because they dominate in numbers and wield more influence over the culture, particularly universities.

Panic Attack addresses topics such as violent attempts to shut down free speech on campus, Title IX and the abuse of students’ due process rights, and the proliferation of victimhood culture. Although these issues have been extensively reported on, Soave at times provides a fresh take on them with his face-to-face interactions with students. In writing his book, Soave visited campuses across the country and interviewed hundreds of activists, attending many of the protests and meetings he describes.

However, even though Soave presents a vivid picture of academia’s ills, he struggles with translating his observations into workable solutions.

Soave begins the book by detailing the history of free speech at Berkeley and contrasting it with the campus climate of today. Those following headlines in the last few years have no doubt been struck by the irony that Berkeley—the site of the infamous 2017 riots that culminated in the setting of fires and several people being beaten unconscious for supporting alternate political views—was originally the site of the campus free speech movement in the 1960s.

Back then, students pressured the administration to get rid of its unofficial ban on communist speakers, and they similarly opposed rules that prohibited students from engaging in political activity on campus. Students of all political stripes came together and found a common cause in defending free speech.

Today’s leftist activists, Soave argues, are fundamentally different from the radical activists of the 1960s and 1970s, due to several “serious defects.” The first defect is that zillenials have an acute need for “emotional safety.” Even though Soave seemingly dislikes the colloquial term “snowflake,” calling it a smear, he makes the case that zillenials suffer from being overly coddled—similar to the case made by Greg Lukianoff and Johnathan Haidt in their book The Coddling of the American Mind. As a result, zillenials equate physical safety with emotional safety, and words that make them feel uncomfortable are considered on par with physical acts of violence.

Another serious defect Soave ascribes to leftist zillenials is ideological in nature: A faithful adherence to the trendy concept known as “intersectionality.” Soave defines it as:

Put simply, intersectionality means that various kinds of oppression—racism, sexism, homophobia, transphobia, economic inequality, and others—are simultaneously distinct from each other and inherently linked… [I]ntersectionality has become a ubiquitous force on college campuses, where young people are taught to perceive all social issues through the lens of interrelated oppression, and to find smaller and smaller grievances to add to the pile.

Among the groups that subscribe to intersectionality are fourth-wave feminists, Antifa, and Black Lives Matter—who are also united in their abhorrence of capitalism and their willingness to censor speech they find offensive.

Besides intersectionality’s insidious focus on wielding grievances as a manipulative political force, it is also self-defeating as a tactic. As Soave points out, it is virtually impossible to live in full accordance with the dictates of intersectionality. There are endless examples of otherwise left-of-center individuals who have been scorned and rejected from the intersectional left for their failure to adhere to its stringent ideological demands.

One infamous case is that of Bret Weinstein, a biology professor at Evergreen State University in Washington. Weinstein, who describes his own political views as “progressive,” endured serious verbal and physical threats after he refused to be forced off campus for a day because he was white. Soave wittingly describes intersectionality as “an ouroboros devouring its own tail” (an ouroboros is an ancient symbol of a serpent eating its own tail).

Nevertheless, despite its hostility to rationality and open inquiry, intersectionality permeates the academy, with entire academic departments dedicated to “studying specific kinds of oppression.” Many professors who espouse intersectionality are also proponents of critical theory—a neo-Marxist method of interpreting social phenomena.

Yet, although Soave acknowledges that faculty often promote Marxist ideology, he is skeptical that they are the source of student radicalization. Instead, he argues, students are more likely to radicalize each other.

To rein in radical activists’ illiberal tendencies, Soave offers several remedies. The first is: less college. Since college seems to be a “breeding ground for cult-like behavior, PTSD, and mountains of debt, why bother?” he asks.

Soave has a point: Colleges that fall short of their mission to pursue the truth arguably do more harm than good for students—particularly those in the humanities. Some students only go to college because of the widespread notion that everyone should go to college, despite the fact that some are better suited for alternative career paths. De-emphasizing the “college for all” mentality might not just alleviate an unnecessary pressure to spend thousands just to “check” the academic checkbox, it can also prevent the radicalization of young people.

Soave then makes a brief call for better K-12 civic education so that young children can learn about the First Amendment. However, given the intersectional left’s tight grip on schools of education—as well as the administration of K-12 education—one can’t help but wonder whether curriculum changes today might undermine the First Amendment rather than promote it.

Finally, Soave calls on liberal intellectuals who are still in good standing with the radical left to “stand up to the plate” and convince intersectional extremists that being anti-free speech is self-defeating. He argues that the onus is on moderate leftists to persuade the radical activists how crucial it is to protect individual rights from being trampled upon:

We need free speech because we still need to hash all of this out—because liberal norms of tolerance, civility, openness, individual rights, and freedom of expression are still the best tools we have for bettering society. In these difficult conversations, everybody has a vested interest in participating— and that includes the left. Activists, you may not think it’s your job to educate me, but I invite you to try.

Soave may be guilty of wishful thinking in this line of reasoning. Although fighting bad ideas with good ideas is the ideal, it’s not clear how that is possible when the very notion of rational discussion is anathema to intersectional activists. Radical leftists aren’t going to be swayed by appeals to free speech. Indeed, it is precisely by expressing commitment to free speech that even moderate-left public figures fall from activists’ grace in the first place.

Dave Rubin, host of the popular Youtube talk show Rubin Report, is a highly illustrative example. He is center-left on nearly every social issue. One clear difference he has with the radical left is his openness to having his views challenged in open dialogue and his rejection of looking at the world through the lens of oppression. Because of this, Rubin has been rejected by much of the left and is often accused of being alt-right, a Nazi sympathizer, or a white supremacist.

Another explanation of how free speech is a non-starter to intersectional activists comes from conservative commentator Ben Shapiro, in his recent book The Right Side of History: How Reason and Moral Purpose Made the West Great:

In order to promote discussions about intersectionality, systems of oppression must be curbed— including the speech of others. Discussions must end. Reason must be thrown out the window since, owing to our different life experiences, we cannot understand one another. Freedom— supposedly a tool of the white power structure—itself must be redefined so as to support the self-realization of intersectional people.

Shapiro raises some issues Soave would do well to consider. Although Soave is correct that freedom of expression is a necessary requisite for a flourishing society, it is not sufficient; appeals to free speech alone are not enough to bridge the widening cultural divide. That’s because there is something deeper at stake than Soave’s prescription addresses: A loss of a common societal vision, and the deterioration of a shared moral framework. Shapiro describes this reality succinctly:

We used to believe in the Founding vision, supported by a framework of personal virtue culled from Judeo-Christian morality…We were a community, forged in fire and tethered together by a set of values…We can regain that. We must regain that. Our individual and communal happiness depends on us regaining the values we’re losing all too quickly.

As Shapiro says, the country’s present political and social upheaval requires rediscovering the cultural, philosophical, and spiritual foundations of the West. Although Soave advocates for Enlightenment values, he does not address the rich Western heritage that made the Enlightenment possible. Those foundations are much older than the Enlightenment and include a shared conception of community, culture, and the good life rooted in Greek philosophy and Christian civilization. Unmoored from this moral context, the values of free inquiry and open dialogue lose their persuasive force.

In the end, even though Soave provides a helpful summary of the psychological profile of young radicals, his solution doesn’t match the gravity of the situation he describes. Only a response that seeks to reclaim lost moral values and re-instill a common vision will do. The liberal society that Soave lauds depends upon it.