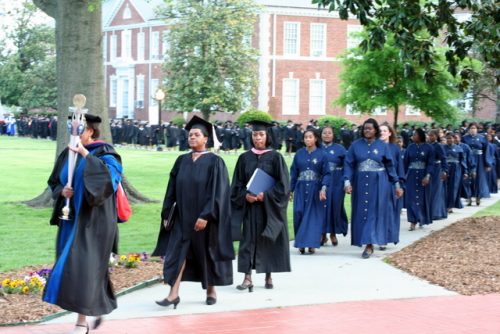 Founded in 1873 in Greensboro, North Carolina, Bennett College is one only two of historically black colleges just for women. It has been a four-year college since 1926, but in recent years it has, like so many other small, private colleges, found survival increasingly difficult. The school’s enrollment fell from 780 students in 2010 to 473 in 2017 and it posted deficits of about $1 million in 2016 and 2017.

When any sort of business—educational or otherwise—finds itself in trouble, its leaders know that they had better take steps to increase revenues, cut costs, or both. Sometimes they succeed in turning from red ink to black; sometimes they don’t. But for colleges that depend on students who in turn depend on federal student aid money, there is an added problem that makes things much harder, namely accreditation.

Colleges that lose their accreditation become ineligible for federal funds and when that happens, many students who need financial aid to afford their education immediately leave and few new students enroll. There are other ways of financing college, but Americans have become so hooked on the idea that federal grants and loans are the way to cover the high cost of college that it’s virtually a death warrant for a college to lose accreditation.

The college is accredited by the Southern Association of Colleges and Schools (SACS) and among the requirements for obtaining and keeping accredited status with SACS is “financial stability.” With Bennett’s declining enrollments and budgetary deficits, SACS put the school on probation in 2016, telling school officials what was already obvious—that they needed to stop losing money.

Two years went by. In December 2018, SACS again cast its eye on Bennett and, finding insufficient progress toward financial stability, announced that it was going to end its accreditation of the college. Even though there had been a modest increase in enrollment, SACS declared that since their rules said that a school cannot remain on probation more than two years, it would not continue Bennett’s accreditation any longer. SACS wouldn’t keep the school on probation to see if school leaders could pull out of trouble. (It’s worth noting that SACS had no other complaints; this confrontation is all about money, not education.)

Bennett appealed that decision to SACS, which agreed to give the school until February 1 to show that it was financially stable. It also obtained a court order preventing SACS from de-accrediting the college while it continued to try to demonstrate financial stability to the satisfaction of the accrediting agency.

Bennett launched a fundraising campaign that had a goal of $5 million in two months. That campaign actually exceeded its goal, raising some $8.2 million. It received donations from more than 11,000 individuals, businesses, churches, and other organizations. Most of the contributions, of course, were small, but there were also several large ones from businesses and even a competing educational institution (High Point University).

With that additional money and a remarkable showing of support, surely SACS would change its mind. But it didn’t.  Despite Bennett’s impressive fundraising effort, SACS announced on February 18 that it still regarded Bennett as so financially unstable that it could no longer confer its stamp of approval on the school.

Whether Bennett or any other college lives or dies should not depend on the opinions of a few people in accrediting agencies.

Why should “financial stability” (in the judgment of a group of people who aren’t experts on small college management) determine whether a school merits accreditation? The answer given by accreditors is that students’ education could be disrupted if they’ve enrolled at a school that might close. But that argument makes little sense.

First, because of the problem of dependency upon federal student aid money discussed above, trying to protect students against the possibility of an educational disruption almost guarantees that there will be a disruption for currently enrolled students. Those who need federal aid will have to go elsewhere to continue their education. Those who don’t need it will also probably have to go elsewhere because once a small, tuition-dependent college (like Bennett) loses accreditation, its revenues will decline so drastically that closure is almost inevitable.

Second, what is wrong with the accreditor merely putting out the information that a school looks financially unstable, and then allowing prospective students to decide if the school is worth taking a chance on? By placing Bennett on probation, that is exactly what it did. Perhaps some students knew about the probation and enrolled in some other school, but many others stayed or decided to enroll as freshmen. The decision belongs in their hands.

SACS says that its rules don’t permit a college to remain on probation for more than two years, but there is nothing sacred about that time period. As long as a supposedly financially imperiled school can keep running (as Bennett certainly can for some years), there is no reason for an accreditor to do the educational equivalent of pulling the plug on a seriously ill patient.

Fortunately, Bennett is still alive. It has obtained an order from a federal judge that SACS cannot terminate its accreditation while the school’s lawsuit against the agency proceeds. It’s sad that some of Bennett’s newly acquired funds will have to be spent on litigation, but that’s better than the alternative of trying to survive without accreditation. That buys the college at least a year.

During that time, it is going to seek accreditation from another agency, the Transnational Association of Christian Colleges and Schools (TRACS). As we read in this Diverse article, TRACS has provided the accreditation needed for other struggling HBCUs to survive when they lost accreditation. One school, Paul Quinn College, the oldest HBCU in Texas, was de-accredited by SACS in 2009, but was able to obtain TRACS accreditation in 2011 and survives to this day. The school seems to have successfully reinvented itself, demonstrating that SACS is not very good at identifying colleges that are on the verge of failure.

Bennett has applied for TRACS accreditation, a process that usually takes 12-18 months. Therefore, it seems likely that even if its suit against the obstinate SACS doesn’t succeed, the school will not lose accreditation and collapse just because some officials at SACS think its finances look too shaky.

Whether Bennett or any other college lives or dies should not depend on the opinions of a few people in accrediting agencies. It never did in the days prior to the bad decision by Congress in 1952 to base eligibility for federal student aid money on a school being accredited by a federally approved agency.

For years, the American Council of Trustees and Alumni (ACTA) has been calling for the severing of the connection between accreditation and eligibility for federal student aid funds—see, for example, this testimony by ACTA president Michael Poliakoff—because it fails to ensure educational quality while at the same time giving accreditors far too much power. Making that change would be very sensible.

The Bennett College story lends strong support for the decoupling of accreditation and eligibility for federal funds.