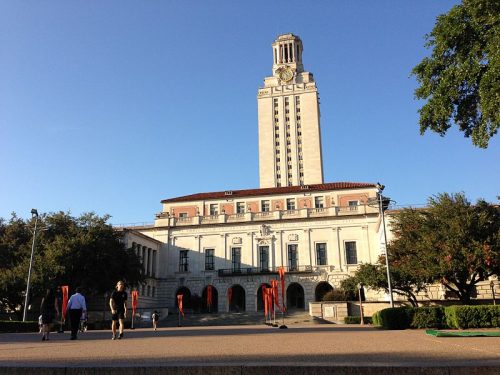 Written in 1903, the University of Texas fight song’s opening lyrics are “The Eyes of Texas are upon you/All the livelong day.” Unfortunately, for many on campus, the sentiments expressed are more than just a catchy tune—it’s a frightening reality.

Thanks to four policies that the school maintains—a verbal harassment ban, an Acceptable Use Policy governing internet & digital use, a Residence Hall Manual, and a “Campus Climate Response Team”—the eyes of the University of Texas really are on students, keeping tabs on their speech all the time, everywhere.

First: UT’s ban on “verbal harassment.” Contained in the school’s Institutional Rules on Student Services and Activities, the ban prohibits speech that is “offensive”—which may include “insults, epithets, ridicule, [and] personal attacks.”

Certainly, “offensive” is a highly subjective term. What’s toxic to one student may be perfectly acceptable to another. Alas, the school fails to sufficiently define the term, putting students in the precarious position of postulating whether their words might wound another, even if they weren’t intended to. And although the rules nominally provide an exception for speech that is “necessary” to the expression of an idea, there’s zero guidance about what the phrase means or how it might be applied.

The school’s Acceptable Use Policy is just as bad. Governing information-technology resources (such as email and internet access), it prohibits communications that are “uncivil,” “rude,” or “harassing.” Again, “uncivil,” “rude,” and “harassing” aren’t defined, thus placing a tremendous amount of discretion in the hands of university bureaucrats. Should these rules be violated, potential punishments “include[,] but [are] not limited to: Verbal warning, Revocation of access privileges, Disciplinary probation, Suspension from the university, [and] Criminal prosecution.” Can a snide comment on someone’s social media page using a university Wi-Fi signal truly open up students to suspension? It would appear so.

The Residence Hall Manual—which, it should be noted, governs one-fifth of the student body who live in university housing—proscribes yet another version of “harassment.” In this setting, the term specifically lists “racism, sexism, heterosexism, cissexism, ageism, ableism, and any other force that seeks to suppress another individual or group of individuals” as a transgression. This word salad of social justice buzzwords comes with no definitions of these salacious terms.

Later on, the manual asserts, “Uncivil behaviors and language that interfere with the privacy, health, welfare, individuality, or safety of other persons are not permitted.” How, exactly, does a student “interfere” with the “individuality” of another? It’s unlikely anyone wants to find that out firsthand.

Last, (but certainly not least) of UT’s speech-suppressing policies is its Campus Climate Response Team (CCRT). Living up to its Orwellian name, the CCRT asks students and faculty to report “bias incidents” and “campus climate incidents” that they see other students committing—which the CCRT then logs, publishes online, investigates, and punishes.

The school fails to provide sufficiently narrow definitions of what “bias incidents” or “campus climate incidents” actually are. But it’s clear that protected speech is covered. The CCRT website lists examples include “somebody…creat[ing] a hostile or offensive classroom environment,” “[i]nsulting and insensitive posts on social media or group chat apps pertaining to race, gender identity, or sexual orientation,” “[d]erogatory comments made on a…course Facebook page,” etc.

Where do these policies apply? The verbal harassment rule “applies to all speech on the campus,” but the school stipulates that “[t]he University may take disciplinary action in response to…incidents that have a substantial connection to the interests of the University regardless of the location in which the incident(s) occur.” Quite literally, you can get in trouble anywhere there might be a UT tie-in—online, out of town, or even out of the country, if it’s a study abroad program. The Acceptable Use Policy would appear to govern communications sent to and from UTexas.edu email accounts, as well as transmitted via UT networks. The Residence Hall Manual covers everything in the dorms. And the CCRT? Complaints can be lodged on-campus, off-campus, or online—in short, basically everywhere.

Readers may wonder how a conservative state’s flagship university came to have such an array of policies hostile to free speech. Unfortunately, these policies have been quietly accumulating for years (for example, the Campus Climate Response Team was created in 2011) and have been both written and enforced by university bureaucrats (in particular, the Office for Inclusion and Equity and the school’s Title IX Office). These departments disdain the concept of free speech, preferring speech that is controlled in ways that allegedly benefit “marginalized” campus groups.

Unfortunately, the school’s policies are unconstitutionally overbroad and vague—discouraging the exercise of free speech and expression on campus because students must guess at the meanings of terms the school uses. There are a substantial number of instances in which those policies cannot be applied consistent with the First Amendment. In addition, they may be enforced in an arbitrary and discriminatory manner based solely on the content of students’ speech, which violates students’ rights under the First and Fourteenth Amendments. The University of Texas is a public school and is bound to uphold the rights enshrined in the Constitution. Sadly, it has failed to do so.

This is why Speech First—a membership association created to defend students’ speech rights on campus through litigation and other means—filed a federal lawsuit against UT on behalf of its members on December 13.

Three members, in particular, are currently incurring concrete harm as a result of the school’s policies; they desire to speak about contentious issues of the day, including immigration, Israel, the #MeToo movement, and the Second Amendment, yet fear that by doing so, they would potentially face investigation and discipline, as their views could easily be characterized by their peers as “offensive” or “uncivil.” Accordingly, these members are listed in the complaint as Students A, B, and C—because they credibly fear punishment from the very institution where they pay tuition to expand their horizons.

Students at the University of Texas, including Speech First members, have been chilled and deterred from speaking openly about issues that are important to them—credibly fearing that their views may be considered “offensive,” “biased,” “uncivil,” or “rude” by other students, which could get them reported. The University is unlikely to voluntarily change these policies—which means the courts must now intervene.

Nicole Neily is the president and founder of Speech First, a membership association that defends students’ free speech rights on campus.

Students’ Speech Chilled at the University of Texas