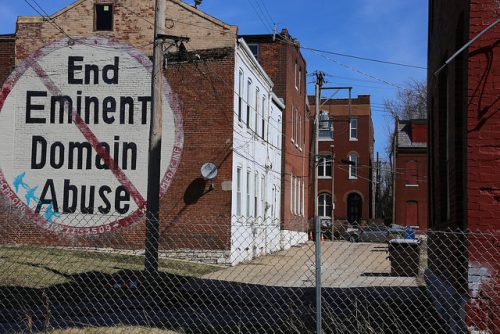 Colleges tend to expand beyond their original missions by hiring more administrators and creating new programs. But they can also expand physically by exercising power usually reserved for state and federal governments. When that happens, universities can abuse their power and undermine the public good.

For a prime example of this expansion, look at how public universities use eminent domain. Universities have used this power to build sports arenas and parking lots, and evict students from university property that is then leased to private companies. Unless the public notices these abuses early, universities are rarely stopped from claiming property.

Eminent domain is the government power of taking private property for public use, with compensation paid to the owner. When used carefully, this taking can be justified and not spark public opposition. For example, it would be nearly impossible to build highways or hospitals in some urban areas without resorting to eminent domain.

Though eminent domain has a legitimate purpose and motive, its use can stoke public outrage and skepticism. Property grabs and unnecessary government projects are littered throughout history. In notable cases, such as Kelo v. City of New London, private property is obtained by the government through eminent domain—and then given to private interests. The documentary Little Pink House focused on Kelo as a stark example of eminent domain abuse. After Kelo, 42 states restricted the acceptable uses of eminent domain: 23 states prohibited it for economic development purposes, 12 limited it to “public use,” and another 12 limit it in regard to blight.

This lack of data is discouraging because some colleges have abused their eminent domain power. A few of these scandals include:

Even when colleges succeed in taking land, doing so can harm the school’s local reputation. If universities go too far, the public may turn to the legislature to constrain school ambition.

In 2015, for example, Northeastern Illinois University (NEIU) attempted to obtain Bryn Mawr Avenue in Chicago to turn it over to private developers. The action so irked some Chicagoans that they pushed for legislation (HB 2558) to allow universities to “use eminent domain only when their current land reserves are insufficient for a development” and restricted them from “using eminent domain to give land for the ownership or use of private third parties.” But ultimately, HB 2558 did not pass and NEIU obtained the property. It then gave the property to American Campus Communities Inc., a private university housing corporation, to provide students with housing options for the financially struggling Illinois University.

Upon examining university use of eminent domain and its results, it’s clear that this power should be reserved for the most extreme cases of need—or, better yet, never used. It harms university reputation, is easily abused by university officials, and is costly to taxpayers who foot the bill for unnecessary expansions.

The use of eminent domain by universities is a classic example of the Field of Dreams mentality that is far too common among higher education administrators: “If you build it, they will come.”

Unless state legislatures restrain this practice, colleges will continue to use government power while the public remains in the dark.

Chris West is a policy fellow at the James G. Martin Center for Academic Renewal.