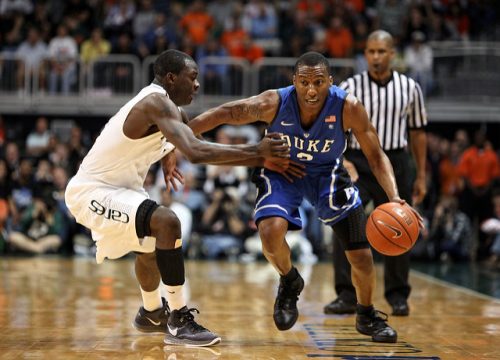 It is increasingly apparent that college basketball serves as an unofficial minor league for the National Basketball Association (NBA) rather than as an extracurricular activity for students. And it is not by accident, but by design.

Take the NBA’s “one-and-done” rule, for instance. It has sparked debate since its addition to the 2005 NBA Collective Bargaining Agreement (CBA). It states that all players must be at least 19 years old during the calendar year of the NBA draft and, unless the player isn’t American, at least one year removed from high school. In the past, players like LeBron James and Kobe Bryant could go directly to the NBA after high school. But now, other stars like Kevin Durant, Kyrie Irving, and DeAndre Ayton have been required to play a year in college.

Those transcendent talents dramatically affect the college basketball season because only five players are on the court at any given point in time. Recruiting these players causes corruption because athletic programs place winning at all costs above academic and ethical needs. A player planning to stay for just one season needs to do no more than the minimum asked of them academically because it is viewed as a temporary stay.

The NCAA had no say in the matter. The NBA can simply state who is eligible to play in their league and who is not.

However, all that could change in the not-too-distant future based on recent comments made by NBA commissioner Adam Silver. In July, Silver acknowledged the considerable discussion to replace the current one-year-in-college mandate with an 18-year-old minimum age rule. “My personal view is that we’re ready to make that change. It won’t come immediately, but…we should be taking a serious look at lowering our age to 18,” Silver said after meeting with the league’s owners. He pointed to recommendations from Condoleezza Rice’s NCAA commission and input from colleges in pushing his opinion against one-and-done.

The adjustment would occur no earlier than the 2021 NBA draft. For colleges and universities, that could be a blessing in disguise. Abolishing the rule could mean colleges won’t need to deal with short-term players anymore—or those who surround the players looking to get rich.

The one-and-done rule is not a widespread issue for NCAA schools, but rather one that has major implications for a handful of programs. Over the past ten years, the University of Kentucky has been the biggest beneficiary of the rule, with 25 freshmen leaving early for the NBA draft.

Other programs with high numbers of one-and-done players include:

Additionally, the University of Nevada at Las Vegas and Syracuse had three players; Ohio State, Oklahoma, Florida State, and Michigan State had two; and twenty-eight other teams have had one player leave after their freshman year.

While one-and-done players are a small fraction of all college players, they are the elite. During the 2017 NBA draft, ten of the first eleven picks were freshmen.

Momentum for a rule change was probably initiated by recent scandals in college basketball. Shoe companies have paid players and required them to play for a particular college that wears their apparel. According to the News & Observer, Adidas executive Jim Gatto admitted to paying $40,000 to the family of guard Dennis Smith Jr. to ensure that he played at North Carolina State University, which wears Adidas apparel. Smith was considered a top-10 player nationally out of high school and eventually became the No. 9 overall pick in the 2017 NBA draft by the Dallas Mavericks. A similar scandal involving Adidas has been confirmed at the University of Louisville.

For players, the current rule has both pros and cons.

One benefit is that it allows players to develop physically and mentally. The coaching that the players receive in college is much more advanced in nearly all cases. Players are better prepared to make an impact in the NBA and have a sustainable playing career. The average high school graduate has not fully grown into their body and is not prepared for the rigors of playing against 25-year-old men. Spending time in college allows them to progress at their own pace, against a more appropriate level of competition.

And some players agreed with that rationale. A pair of former University of North Carolina teammates, Wayne Ellington and Brandan Wright, weighed in on how one-and-done benefits players when it was considered in 2005: “I also think it’s going to help the league a little bit. Some guys who come in, like from this year’s draft, it will help,” Ellington told High School Hoops magazine. Wright echoed similar beliefs: “It may hurt guys who need money, but it will help people grow and develop.”

For those who enter the draft too soon do not have the benefit of progress toward an academic degree. Michael Jordan, Russell Westbrook, John Wall, Kevin Durant, and Chris Paul are just a few examples of NBA players who have returned to their colleges during the off-season to finish their degrees.

But some players are ready to go straight from high school to the NBA. Those players are few and far between, but they are prevented from earning money with their talents immediately—and are tempted to sell apparel. As a private employer, the NBA has every right to dictate the demographics of their employees, but it is odd that an 18-year-old can join the military, but not play professional basketball.

And some players are publicly declaring their support for eliminating one-and-done. “If you’re good enough to play, then you should be in the NBA. You should play. That’s why I always argue there shouldn’t be an age limit. Guys should be able to come out of high school, not spend a year in college,” Duke graduate and NBA player JJ Redick told Business Insider.

The NCAA is really f—ed up. Everybody’s making money except the players. We’re the ones waking up early as hell to be the best teams and do everything they want us to do and then the players get nothing. They say education, but if I’m there for a year, I can’t get much education…I’m [at LSU] because I have to be here…I can’t get a degree in two semesters, so it’s kind of pointless. I feel like I’m wasting time.

LeBron James, who did not play a single minute of college basketball, believes that the one-and-done system should be extinguished. He offered a partial solution by suggesting that the NBA create a better developmental league like Major League Baseball’s minor league system, which has a stronger emphasis on training players rather than playing. And soccer academies across the globe allow players at a young age to train. James’ concept of a developmental league would allow high school graduates to leave immediately to play professional basketball. As a result, colleges could weed out the recruits with no intention of being committed students.

The majority of one-and-done athletes would not pursue higher education if they could go straight to the professional level. Those who are now forced to attend college for a year take weak classes as part of a watered-down study program that ensures they qualify to play basketball, weakening the academic integrity of those universities. One-and-done players also take scholarships away from others who might want to play basketball while earning a quality education. But for others, spending a year in college might be a positive influence on their lives.

According to from the Institute for Diversity and Ethics in Sport, via USA TODAY SPORTS, 78 percent of college basketball players representing the 68 teams in the 2018 NCAA Men’s Basketball Tournament graduated from college.

If the one-and-done rule is eliminated as expected, it will be the NBA’s decision—it will not be made with academic integrity in mind. However, the effect on campus would be to keep predatory opportunists and non-academically minded players away. Though elite programs will still focus on championships and athletic scandals won’t disappear, it would be a small victory for campus academics.

Josh Edwards covers college football and the NFL for 247Sports and earned a bachelor’s and master’s degree from Ohio University and Xavier University, respectively.

How Colleges Could Benefit from an NBA Rule Change