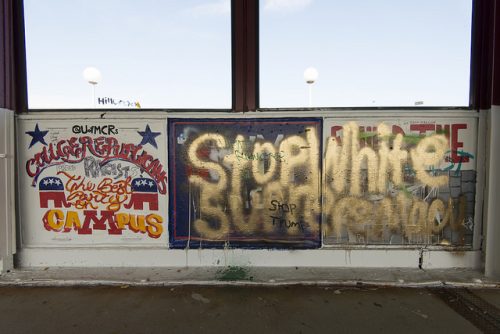 Headlines in the conservative blogosphere sometimes characterize academia as a hostile environment. Real and egregious offenses by administrators, faculty, and fellow students occur that trample the rights of conservative and libertarian students and their invited speakers.

But do these incidents represent the situation on most campuses? My own experience at Wake County Technical College in Raleigh, North Carolina suggested otherwise. So, I conducted a survey of student group leaders to see what they had to say. I presented the empirical results in the first part; in this part, I reveal their qualitative responses. Their comments have been lightly edited for clarity.

Administrators are either really disorganized or indifferent to the needs of organizations like ours. For example, I had to find out that there was an equipment rental system on my own for an event we recently held. That was nowhere on the “Get Involved” NCSU student organization website. And while an email to one of my professors, who also happens to be our chapter’s advisor, helped get word out about our event, it just seemed like the school is too compartmentalized to have any streamlined process for holding events.

If we wanted security, I would have to jump through hoops to find out how to get security. I am sure NCSU administrators would disagree because they do not want the university to look bad. But believe me, it is a slow process to get university attention and permissions for events, and the university is at fault.

Of the few interactions I’ve had with other individuals in classes or at tabling events, a lot of individuals simply want free things (food, water, Constitutions) or want to go about the day and get a degree without having to be pulled over by some student activist to talk about our “Lord and Savior,” or the government. It is not fun to talk about ideas with a demographic you know disagrees with you most of the time. But neither is learning how to legally pay fewer taxes, and everyone that can usually ends up doing so. I would at least prefer that those who vehemently despise our views hate our views for what they are, rather than ignore political corruption just because it was done by a Republican or a Democrat or even by a capital-L Libertarian.

Administration is clearly biased against the right. That said, they’re actually relatively good about defending student groups that are right wing–Clemson has a huge right-wing presence: Tiger Town Observer (a political news website), Turning Point USA, Young Americans for Freedom, Young Americans for Liberty, etc. Administrators are definitely bureaucrats. But they’re certainly not as bad as you find on some other campuses; this year, we’ve been totally left alone.

The student body’s apathy is our biggest problem. Clemson has one of the most right-wing student bodies in the country, but they don’t engage. The left-wing students obviously are more vocal and more militant, so getting a right-wing message to the largely apathetic silent majority has been our struggle.

(Editor’s note: Lord further explained his use of the word “militant:” “Well, just that they’re louder because, given their illusion of popular support, they can afford to be.”)

Sarah Scherer, Young Americans for Liberty at the University of Georgia-Athens:

Students who disagree with us are apathetic and quiet; we haven’t gotten any violent or passionate pushback. We’re polite to everyone and don’t try to “trigger” people intentionally, so maybe that has something to do with it. We just say what we believe…We have lots of interest and enthusiasm from people in our club. We’re very tight-knit.

But the process of starting a club is ridiculous. It includes extensive forms, deadlines, and long wait times to be “approved” by the administration before you can apply for a meeting room. Campus reservations are also quite slow…Every year you have to “renew,” and that is rather tedious as well. [To reserve a room], you fill out a form which isn’t too bad, and then wait times are 1-2 weeks.

Will Rierson, College Republicans at University of North Carolina-Chapel Hill:

I think that the university administration has been largely supportive of our organization. Almost none of the officials we work with are sympathetic to our political views, but they understand the importance of encouraging dialogue and minority opinions on campus.

One area of university resistance you have seen in systems like the University of California is charging conservative clubs exorbitant security fees. But the UNC campus police provide security pro bono if they determine that we need their assistance, without us asking.

The student population here is very diverse and intellectually curious, but less tolerant than the administration. There are vocal factions that claim College Republican events cause emotional violence, or other crazy claims. Like many other conservatives these days, we’ve received baseless accusations of being fascist. Still, we maintain a fairly good working relationship with the Young Democrats and welcome plenty of open-minded liberal students to our major speaker events.

The college I went to is extremely Catholic and conservative. As a member of Young Americans for Liberty, I was seen as more of a radical than Democrats were. Most students were apathetic toward political discourse and were solidified for life already as pro-life Republicans. Since our school was private, the administration mainly ignored us. Occasionally, they would make getting a speaker or reserving a room more difficult than it needed to be, but otherwise we just avoided each other. On my campus, the only way to be considered a “true Catholic” was to be a conservative. There was very little disagreement about political ideas in the conservative wings on campus and liberty people were primarily laughed at or shunned for being “crazy potheads.”

Often, I was easily dismissed when I spoke up in classes or when tabling on campus. Especially in class, people found it very easy to use phrases such as “well that’s your ideology so I’d expect you to think that.” It made it hard to participate in classes because often the only people who would engage me would be people who were already angry about my opinion, so they wouldn’t debate me. Instead, they’ would try and shout me down to make me look “wrong.” As far as saying what I wanted, I personally never had a problem doing that—it was getting people to seriously listen that was rough.

The college staff definitely leans left. Most of the Student Life staff, including a dean, have participated in Democratic rallies and volunteered for Democratic candidates openly. However, the assistant dean of Student Life has been nothing but helpful to me and my College Republicans chapter during my two-year tenure as chairman, even going so far as to offer advice and compliments on the chapter’s activism.

Honestly, interaction with university staff has been mostly good. I’ve never heard of any attacks against my chapter, but I have heard a complaint from a member about someone calling her a homophobe from across the street the morning after Trump won. The faculty and staff have promoted events when I’ve asked them to, and they have been very supportive when we have invited Republican elected officials.

I personally have not had a problem with the administration at school. However, there is a lot of red tape that student organizations must go through. I am sure administrators are behind this, but I have not experienced any particular negative events.

We typically get very polarized opinions from the student body. Either a student really loves and engages with our message, or they have hostile disagreement.

I think campus conservatives get labeled unfairly. It is assumed that all of us are old-fashioned bigots which simply is not true. I so wish that this perception would begin to change.

This was the first semester that we started Young Americans for Liberty at my school and students and administrators seemed to accept it rather well. The administrators worked with me to get my student organization active on campus. That being said, there were a handful of students who disagreed with us when we would table or host events—but no noteworthy interactions. One student vehemently disagreed but was cordial and wanted to have a public debate later.

For now, we are the only political organization on campus. The College Republicans and College Democrats disbanded a few years ago. So, a lot of students (especially the liberty- and conservative-minded ones) were very excited about joining. We handed out pocket Constitutions at events and had a free speech ball which everyone loved. Overall, the students have been engaged this semester.

Berklee isn’t recognizing any new clubs until next semester, including new leftist clubs that are just forming, but we can still book classrooms for “rehearsals” and have our meetings. The only thing we don’t have without recognition is funding. So there hasn’t been much contact with administration, but there will be next semester.

(Editor’s note: About 5-10 people attend meetings. They haven’t had any protests or problems thus far.)

Administration has not been a problem. We are a private Baptist college, so interaction with college officials have been fine. We technically are a chapter with Turning Point USA, but we have internal problems like recruiting. Students are interested in joining the College Republicans, but not as much as with Turning Point USA.

Though conservatives are more numerous, liberal groups are more active and visible.

(Editor’s note: Peters said he has to watch himself because it’s a private school. When asked if pressure is obvious or more coercive, he said: “We all know what’s acceptable on campus, so we keep a low profile.”)

Running Turning Point USA at Campbell University has been a dream! It’s a very conservative campus in general and we haven’t had any issues. The administration is incredibly supportive; we even have a member as our advisor. I will say because it is such a conservative campus that, at first, we struggled to get students to see why our message mattered, as most had never experienced free speech zones or other problems. And while many students are somewhat apathetic, some have an interest in politics. We started with about five people, but now we’re getting 15-20 people to our meetings.

Though the above experiences are not the only experiences of conservative college groups, their anecdotes give the public a glimpse of how campus conservatives interact with other students, professors, and administrators.

How Comfortable Do Conservatives Feel on Campus?