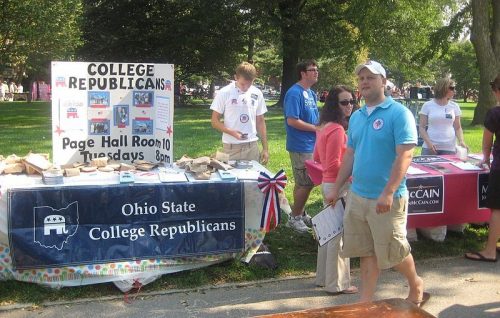 The internet is filled with stories of how conservative student groups are mistreated on campus. Conservative and libertarian students often sound the alarm about hostile administrators, violent protesters, and unpleasant experiences. They have their invited speakers shouted down, prevented from speaking by the imposition of exorbitant security fees, or simply canceled by administrators bending to the demands of the mob. And they must go to court to defend their First Amendment rights.

But, as a conservative student activist at Wake Technical Community College in Raleigh, North Carolina, I didn’t see any of that. My interactions with administrators and fellow students were largely good.

So, in order to discover the real situation as to whether the American campus resembles a war zone for conservatives, I interviewed and surveyed conservative student leaders around the country in the spring of 2018. I received responses from 77 students in 35 states who belonged to one of seven different groups: Turning Point USA (TPUSA), Students for Life, Young Americans for Liberty (YAL), College Libertarians, Students for Liberty, College Republicans (CRs), and College Democrats.

The survey was composed of nine questions, which can be found at the bottom of this article. Sixty-three students completed the survey and I spoke with an additional 14 students in personal interviews. A large majority were from three groups: TPUSA, YAL, and the CRs. I attempted to keep the survey as geographically diverse as possible, but the majority of the students were from Ohio, North Carolina, and Virginia.

The results suggest something different than academia as a war zone for academics, as did my own experience. At Wake Tech, I was both the chapter president and a state chairperson for Young Americans for Liberty. I was surprised by a lack of opposition. As the liaison to the state organization for seven chapters, I never heard of any problems student groups had with faculty, administrators, or other students.

No protesters tried to shut down any of our events. Faculty were nothing but pleasant—my interactions with them consisted of friendly conversations. Professors invited me to join their clubs; one even gave me books he thought I would find interesting.

And that seems to be the experience of most of the respondents. While my sample is small, there seemed to be a general pattern that most student activists did not face hostility. Most problems were those of bureaucracy or indifference.

But serious issues remain, according to some respondents. Many have faced aggressive protests, hostility, and bad policies. And the degree of opposition was different depending on the particular student group. Members of three groups provided the overwhelming number of responses: TPUSA, YAL, and the CRs. Among them, TPUSA faced the most animosity. They more frequently dealt with hostile outside groups, they were less frequently invited to participate in discussions, and their events frequently have protests. It took them longer to be recognized and not a single one reported that their dealings with school administrators were “friendly and helpful.”

One reason for differences in treatment may be the groups themselves. TPUSA is a relative newcomer to the scene, having been founded in 2012, whereas YAL and the CRs have been around much longer. TPUSA members tend to be more politically aggressive and confrontational. They show their support for President Trump openly in an environment generally opposed to him.

College Republicans face less hostility than TPUSA, and they are treated better in general by the university community. Yet they do not fare quite as well as the more libertarian organizations such as YAL.

Here are the survey results. Two questions were left out.

Question #4, asking about the behavior of other students, was left out because responses were sporadic and not particularly revealing.

4. Do you agree or disagree with the following statements?

Question #9, asking about their qualitative experiences, will be revealed in another article.