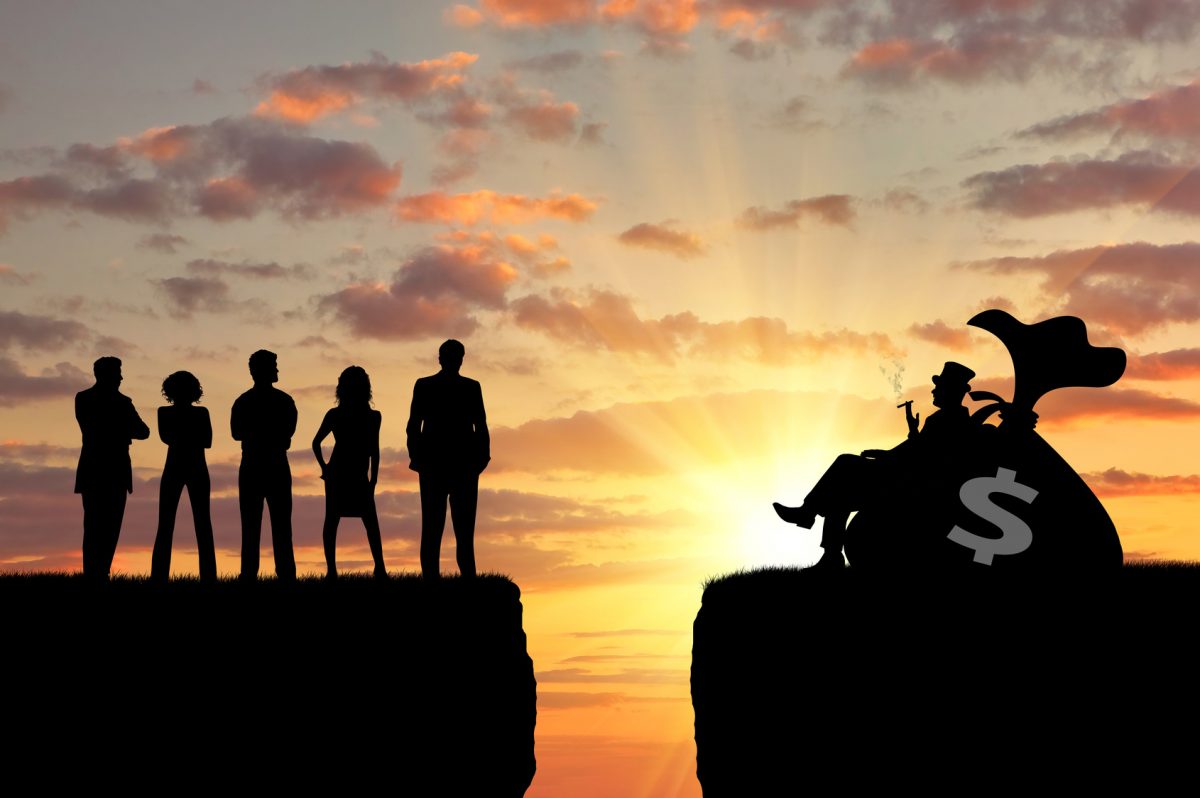 Many professors cannot resist the temptation to smuggle their personal beliefs into the courses they teach. As long as those beliefs are “progressive,” there is little chance that higher-ups in their departments or top administrators will try to rein them in. For example, engineering has been infiltrated by activists who are concerned about social justice concerns, not just how to best design objects for performance and safety, as Michigan State professor Indrek Wichman pointed out.

A recent article published on Inside Higher Ed, “B-Schools That Don’t Boast About Billionaire Alumni,” similarly informs us that some business school professors have decided that they should teach students about their own social justice concerns, not just how to best manage an enterprise.

Writer Marjorie Valbrun explains that increasing academic concern about income inequality is justified because, in the words of the leftist Institute for Policy Studies, income inequality “has been growing markedly by every major statistical measure for some 30 years.”

In fact, there is good reason to doubt that income in the United States is distributed much differently that in other major industrial nations. Former Senator Phil Gramm and John Early (former commissioner in the Bureau of Labor Statistics) explained in this August 9 Wall Street Journal article (subscriber content) that the U.S. only appears to have a high concentration of wealth because the statistics we submit to the Organization for Economic Cooperation and Development underreport income transfers.

When all transfer payments and taxes are counted, the U.S. redistributes a larger share of its disposable income than any country other than France…The progressive dream of an America with massive income redistribution and highly progressive tax system has already come true.

Nevertheless, if egalitarians believe that the U.S. should further decrease the gap between rich and poor by having businesses act in what they regard as socially responsible ways, they are free to do so. The questions, however, are whether that advocacy is sensible (can business actions really make a net improvement in the lives of poor people?) and whether teaching about this has a place in the business school curriculum.

One academic quoted in the article is Selma Botman, provost at Yeshiva University. She says, “If we teach (students) a high level of integrity and to conduct business using Jewish principles of justice, humanity, compassion and service to others, then we’re giving our students the tools to be successful in the business world, in the community and in their family life.” Toward that end, she extols Yeshiva courses such as “Business as a Human Enterprise” that includes “corporate social responsibility” and a labor economics course focusing on inequalities in human capital and wages.

But should Jewish values incline one to the belief that acting with justice and humanity means altering your business decision-making away from profit maximization? One Jewish intellectual who thought otherwise was Milton Friedman. (Friedman was of Jewish ancestry, although he wasn’t religiously Jewish.)  He took issue with the notion that business executives have either a moral warrant or expertise to pursue social justice objectives in their roles as corporate managers in his 1970 essay, “The Social Responsibility of Business Is to Increase its Profits.”

On the morality of acting to further supposed “social objectives” through business, Friedman pointed out that executives are employees of the owners of a company and have a primary obligation to fulfill their wishes, which, he wrote, “generally will be to make as much money as possible while conforming to the basic rules of the society…” The owners, of course, are free to use their returns however they see fit to advance their goals, which probably differ from those of the people for whom the manager acts.

So, when a business executive pursues his own social justice desires—perhaps by paying some employees more than the market rate for their labor, a “just wage”—he is spending other people’s money. He’s acting as the principal when he is merely an agent. In Friedman’s view, the ethical course for individuals who want to advance social objectives is to do so with their own time and money, or work for organizations that are specifically aligned with their goals.

On the matter of expertise, Friedman noted that business executives are poorly placed to know whether their “socially responsible” conduct will have the intended good effects or have unintended bad effects. If, e.g., a manager chooses to pay some workers a “living wage” higher than the competitive market wage, that means having less money to devote to other business objectives. Generosity in one area means cutting back in others. Can the manager know if he’s doing net good or net harm? Friedman thought not.

Another university lauded as having embraced educating for social responsibility is Notre Dame. Its Mendoza College of Business has become an exponent of social justice. The story quotes Charlice Hurst, an assistant professor who incorporates the subject of income inequality into her teaching “to try and get students to understand how it can affect the operations of their business.”

Said Hurst, “It’s just sad to see super-talented students who are really excited about doing positive things in the world saying, ‘I can’t do anything until I get rich.’”

In other words, the students come into Notre Dame thinking that they should first acquire their own resources before acting on their ideas for improving society. Professor Hurst thinks that’s sad and wants to convince them that they need not wait. They can begin doing social good right away.

Once in the business world, they might push for the payment of “just wages.” Hurst, who has never worked in the for-profit sector herself, has been part of Notre Dame’s Just Wage Working Group and looks askance at employers “paying poverty wages.”

But even if a Notre Dame M.B.A. were able to get the business he works for to implement a “just wage” policy, what about the inevitable trade-offs between higher labor expenses and other things the firm might have done, such as product improvement, expansion, or simply hiring more workers? Just as with government policy, good intentions in business can have harmful unintended effects.

What about the inevitable trade-offs between higher labor expenses and other things the firm might have done, such as product improvement, expansion, or simply hiring more workers?

The University of Pennsylvania’s famous Wharton School (from which Donald Trump graduated) has also swooned for social justice. Professor Katherine Klein speaks with pride about the Wharton Social Impact Initiative, a program claiming to advance “the science and practice of social impact” through research, training, and outreach. She told Inside Higher Ed that although more attention is being paid to income inequality than ten years ago, it isn’t enough.

She might be right about that. I think more work should be done on income equality, especially to show the ways government policy promotes and perpetuates it—but that has nothing to do with teaching how to run efficient business operations.

The problem with the spreading of social justice ideas into the business curriculum is two-fold.

First, as Friedman argued, it is a fundamentally subversive idea to suggest that businesses can and should be run with “social justice” in mind. To maximize profits in fact is acting for the social good by using limited resources efficiently to produce goods and services desired by consumers. Telling business leaders that they can do more good for society if they pursue other objectives is mistaken and undermines our system of private property and free enterprise.

Second, business schools are wasting their students’ time when faculty members focus on income inequality and similar personal concerns rather than on the techniques for optimally managing a company. Even if few students come away with a desire to implement social justice activism once they are employed, valuable educational time has been wasted. But for the social justice diversions, they might have learned their profession better.