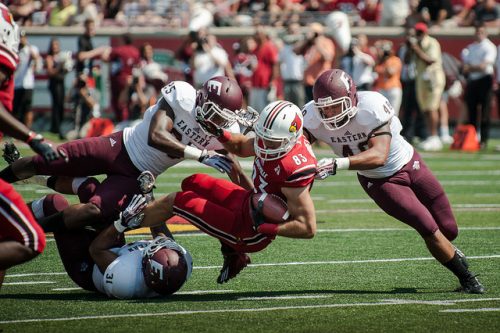 Kentuckians were forced to consider potential problems with intercollegiate athletics when both the University of Louisville and the University of Kentucky were implicated in the recent FBI probe into possibly corrupt and fraudulent recruiting practices in college basketball. Amid the outrage, politicians raised the possibility of serious reforms, such as expanding the oversight of Boards of Trustees or student-athletes getting paid for their athletic contributions.

Whether any real changes will come of the scandal may be unlikely, for major college sports that produce high television and memorabilia revenues have proven resistant to significant reforms. But it isn’t just the state’s two high-profile national championship-winning athletic programs where the sports culture has undue influence. There are unseen problems with the state’s other public universities as well, the ones that do not make profits from their athletics programs.

The specific problem is that successful revenue-producing sports programs are categorized differently from non-successful sports programs. When NCAA athletic programs are highly profitable, as they are at the University of Kentucky and the University of Louisville, they are classified as auxiliary and expected to break even or generate significant revenue. In such situations, the public can clearly tally costs as well as gains and determine what the programs do (or do not) give back to their host institutions.

When they are not profitable, though, they are classified as non-auxiliary, and hence listed as a general expense to be paid out of operational funds. In Kentucky’s regional public colleges, spending on athletics is mixed in with funds intended for academics. Kentucky’s new performance funding model shows how this spending obfuscation happens. The legislature, in consultation with university leaders, crafted a formula designed to privilege the core academic mission of the state’s university system. One of the specific methods utilized was to base 10 percent of a school’s appropriation on its “share of total instruction and student services spending, net of maintenance and operation, to support campus administrative functions.”

College budgeting standards are established by the National Association of College and University Budget Officers (NACUBO). The performance funding model combines the NACUBO categories of “instruction” and “student services” to determine the direct cost of educating students. This metric is intended to reward schools for “investing” in students’ educations. Unfortunately, the NACUBO category of “student services” is defined so broadly that it includes not just expenses such as those “incurred for the offices of admissions and the registrar” but also intercollegiate athletics “if the [athletics] program is not operated as an auxiliary enterprise.”

Kentucky’s regional universities, like the other 90 percent of schools in NCAA Division I that fail to turn a profit, designate their athletic programs as non-auxiliary. This makes their deficits factor positively into performance funding calculations as money spent on the direct cost of educating students. Money-losing athletic programs are made to look like a benefit for students.

Letting sports deficits blend in with teaching and research expenses hides just how much an athletics program costs and how much, if anything, it brings in.

Letting sports deficits blend in with teaching and research expenses hides just how much an athletics program costs and how much, if anything, it brings in. This confusing funding maneuver has obscured the enormous athletics programs costs that have been acknowledged by the NCAA, are of concern to the Knight Commission on Intercollegiate Athletics, and highlighted in a widely circulated Huffington Post & Chronicle of Higher Education investigation published as “Sports at Any Cost.”

The non-auxiliary classification of the state’s regional athletic programs, in fact, is what kept the Kentucky legislature from recognizing that it was implicitly supporting athletic program deficits in its academically focused funding formula.

While athletic participation can contribute to student success, there is no clear indication that they aid the academic progress of all students who compete as athletes.  And there is almost no evidence of college sports’ positive effect on the academic success of the non-athlete students who are forced to pay tuition and fees to maintain their schools’ NCAA Division I status.

Yet the taxpayers and non-athlete students are the ones who bear the financial burden for athletic programs they do not benefit from. In Kentucky, regional universities spend tens of millions of dollars annually on their athletics programs. Most of the money comes from tuition, fees, and state appropriations.

According to the latest available public data, the two Kentucky schools serving the poorest part of the state are subsidizing their Division I programs at the rate of $1,619 per full-time equivalent undergraduate at Morehead State University and $1,063 per full-time equivalent undergraduate at Eastern Kentucky University. These figures, which are higher than those of the other Kentucky regional universities, are sadly not that far out of line with state subsidies for athletics nationally.

Only when athletic spending is both transparent and separated from other expenditures can the public, and, even more importantly, state legislatures, fully understand the risk of athletic spending, for spending on sports has been one of the factors that caused Moody’s Investors Service to downgrade higher education’s economic outlook from “stable” to “negative” in 2018.

Since academia and profit-oriented athletic organizations such as the NCAA will resist self-reform in such matters, there is an urgent need for outside pressure on universities to reveal how they run their athletic enterprises—and how much the public actually pays. Additionally, NACUBO could help by revising how it categorizes athletics spending. Such measures are necessary to make academia reprioritize the “student” part of student-athlete.

Ann Marie Adams is a professor of English at Morehead State University.

Gaming the System: How Kentucky Spends Funding for Students on Athletics