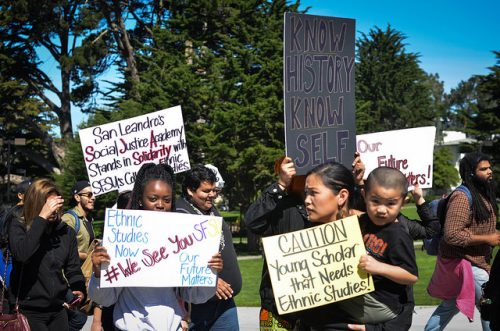 Like most Americans, I have always assumed that color blindness is our ideal.  Not any more: color blindness is now become the new racism. So much for a 70-year struggle to fulfill Martin Luther King Jr.’s wish that his children be “judged not by the color of their skin, but by the content of their character.” So much for the noble aim to treat people as individuals rather than as representatives of an identity group.

How is color blindness not a virtue?  Is it really racist now? Where on earth does such an idea come from? The answer seems to be “race and ethnic studies,” a mushrooming specialization which pops up in in several traditional academic disciplines such as cultural anthropology, political science, social psychology, and sociology. The problems I will describe infect all, but I focus on sociology, where MLK’s idea of color blindness has been turned on its head.

Sociology began as a science. Max Weber, Émile Durkheim, and other founders of the field insisted on objectivity: empirical measurement and logical argument. Remnants of that tradition remain, but a non-scientific movement now threatens to take over.

Sociology is complex because it necessarily intersects with psychology, economics, politics, anthropology, and even evolutionary biology. Sociologists are no smarter than other social scientists. No one could possibly master all these disciplines. It is no surprise, then, that this mélange has evolved in multiple directions that often have little connection with one another. The study of race and ethnicity is possibly the dominant, certainly the most visible, part of contemporary sociology with “gender studies” a close second. It has explicitly abandoned any allegiance to science, as we will see.

Contra Karl Marx, science is about knowledge, not action. But politics is part of sociology, which means that straying from the scientific straight and narrow is all too easy: from scholarship to social justice is but a single, slippery step. For Marxists the point is not understanding the world, but changing it—by politics and, if necessary, by force. Scholarship and science have been subordinated to activism in the branch of sociology I will call CBR (“color-blind racism,” from the subtitle of a book by Eduardo Bonilla-Silva, discussed below).

According to CBR doctrine, color blindness is any attempt to explain racial disparities by means other than racist discrimination. “This ideology [color blindness]…explains contemporary racial inequality as the outcome of nonracial dynamics,” writes Eduardo Bonilla-Silva, just elevated to distinguished professor of sociology at Duke University, and currently president of the American Sociological Association, in the fourth edition of his book, Racism without Racists.

In other words, CBR assumes, without proof, that non-racial factors are irrelevant, so that any attempt to draw attention to them is ipso facto racist. This claim makes sense only if one accepts the CBR conceptual framework, which is not easy because, while claims and allegations are many, facts are few. Indeed, the elements of this kind of sociology are not facts of the usual social-science sort: surveys based on random samples, verifiable measures of achievement, interests or ability, family size, income, or other demographic information. Instead, interviews, stories, anecdotes, and non-random samples are the norm.

There is even something called “snowball sampling” which finds people by going from one interviewee to his or her friend, to friends of friends, and so on. This is about as non-random a process as you can get; it is obviously impossible to generalize from a snowball sample to the population at large. Yet a typical study generalizes from a snowball sample of, say, black professionals to black professionals as a whole, ignoring the distortion of selection bias.

CBR sociology is qualitative, not quantitative, closer to postmodern philosophy, to (biased) journalism and to literature, than to empirical science. Contrary to the norms of science, CBR arguments don’t proceed from factual premises to logical implications. Assertions take the place of facts and logic is replaced by rhetoric. The whole is persuasive only to those willing to immerse themselves in CBR sociology’s special vocabulary of “frames,” “discursive analysis,” “story lines,” “narrative,” and the like.

Here are a couple of examples. The first is from a 2015 New York Times Opinionator interview with Texas A&M sociologist Joe Feagin, entitled  “American Racism in the ‘White Frame’:”

To understand well the realities of American racism, one must adopt an analytical perspective focused on the what, why and, who of the systemic white racism that is central and foundational to this society.

Here is another from Skidmore College sociologist Jennifer Mueller:

Color-blind racism is theorized as covert and highly institutionalized. As such, analyses of contemporary racial reproduction often emphasize the structure of colorblindness, particularly the habitual routines and discursive patterns of everyday white actors…this work may conceal whites’ innovation in reproducing, revising, and at times resisting white supremacy and corresponding logics. [Emphasis added]

“One must adopt…” Why? “Is theorized as …” Means what? “White frame?” “White logics?” These terms mean little to the average reader. But the language serves to insulate the work from criticism by the uninitiated. And the systemic racism of color blindness is simply assumed; no proof seems to be needed.

Moreover, CBR conclusions frequently violate longstanding legal doctrine such as mens rea, the idea that intent is necessary to prove guilt. Consider that color-blind racism is assumed to be unconscious, so embedded in the culture that people commit racial transgressions without being aware of their own incivility. Nevertheless, despite their lack of, not just intent, but of awareness, whites are guilty anyway. This is Orwellian thoughtcrime for the 21st century!

Despite the fact CBR is political rather than scientific, more inclined to activism than scholarship, it is blooming in academia. It is the topic of numerous academic books in multiple editions—and almost always treated favorably. It is promoted throughout the educational world: by curriculum design (down to the K-12 level), by policy diktat from sympathetic administrators (“implicit bias,” “hate and bias” inquiries, “Diversity and Inclusion” training, and the like), by “no-platforming” intimidation and exclusion of contrary views by agitators, and sometimes by Antifa and violent demonstrations.

Just where this activism leads, I will get to in the second part of this essay.