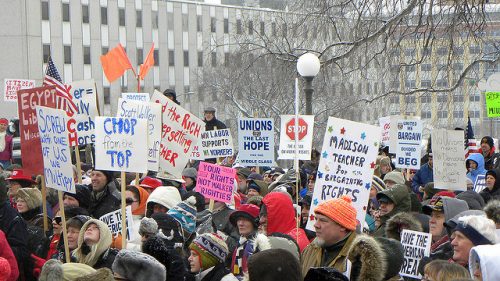 Last month, the U.S. Supreme Court took a significant step toward restoring individual liberty for all government employees, including faculty in public universities and colleges, with its decision in Janus v. AFSCME. Faculty members will no longer be forced to pay any labor union any fee for any purpose as a condition of continued government employment.

Janus overturned the Court’s 1977 decision in Abood v. Board of Education against which I and thousands of fellow liberty-loving public higher education faculty have long struggled. Abood prohibited unions from charging faculty for their explicit political advocacy but permitted them to charge faculty for their activities as exclusive bargaining agents, even if the individual wanted no such representation. The Janus Court ruled that all such activities are inherently political so mandatory charges to pay for them violate the First Amendment.

I feel vindicated by Janus; and, to the extent that the decision weakens the influence of faculty unions, it gives me hope that higher education may gradually turn back to academic inquiry and away from the herd pursuit of political correctness. Aristotle said, “Hope is a waking dream.” I have such a dream.

The California Faculty Association (CFA) acquired monopoly bargaining privileges over all faculty in the California State University system in 1982. It did not achieve the government-granted power to force all faculty members to pay for its alleged services until late in 1999. The statute that created that power included a religious exemption for faculty with “sincerely held religious beliefs” who subscribed to specific religions with a history of opposing unions, such as the Seventh Day Adventists.

On the grounds of our own sincerely held religious beliefs, several of my colleagues and I petitioned the CFA for such an exemption. The CFA superciliously asserted that our beliefs were not sincere.

I don’t know where the CFA got the wisdom to discern the sincerity of religious belief, but I know where it got the power to do so—from the California Legislature. I am a Catholic, and I outlined why I believe that Catholic Social Teaching is averse to unionism based on force here.

With the help of the National Right to Work Legal Defense Foundation, two colleagues and I filed suit in federal court in February 2000, claiming that some of the charges CFA wanted to assess against us, especially for its lobbying, were not permitted under Abood and that CFA discriminated against us on the basis of our religion.

In November, we lost the case. On the question of religious exemption the judge wrote:

[The] CFA has not used as a factor, and disavows any future intention to use as a factor, whether a fee payer is a member of a bona fide religion, body, or sect when it determines whether to grant an exemption based on religious accommodation. CFA denied plaintiffs’ applications because it determined that their beliefs were not “sincerely held.”

The judge confused the moral wisdom of the CFA with its government-granted power. Or maybe he wasn’t confused. Maybe he just liked unions.

Later, with help from attorney Bruce Cameron at the National Right to Work Legal Defense Foundation, I filed a charge of religious discrimination against the CFA with the Equal Employment Opportunity Commission. In 2001 I won that argument, and the CFA was forced to stop taking my money against my will. Instead, I had to give the same amount of money to a union-approved charity. Alas, the National Right to Work Legal Defense Foundation was not on CFA’s approved list. At least the CFA didn’t get my money.

In 2005 I became an associate dean of the business school so I was no longer forced to pay anything to the CFA or its approved charity. I retired from the university in 2007.

Throughout the struggle, the kindest thing my adversaries had to say about me was that I was anti-union. They missed the point. I am anti-coercion. If unions represented only their voluntary members and left non-members alone, I would have no complaint. Correctly understood, freedom of association is a fundamental human right. Faculty, as well as all workers, should be free to choose.

Now, because of Janus, no one has to worry about what a union thinks about his or her religious beliefs. No one has to suffer the condescending smirks of union bosses in his or her appeals to reason. No one has to wonder if this or that union activity is political or representational. No one has to pay anything at all to any union for any purpose. There is even a website that helps faculty escape from the CFA. There is joy in my soul.

Nevertheless, Janus will significantly reduce the money that unions have to spend. For example, the National Education Association has already cut its annual budget by $5 million because it fears that as many as 20 percent of its members will now drop out. Loss of income from departing members and non-members will weaken the unions’ clout both in politics and on the campus.

Faculty unions patterned themselves on the old industrial model. They are all about “solidarity,” suppression of the individual in favor of the collective, and the promulgation of “social justice.” They really don’t care about traditional academic values. For example, they claimed to support faculty tenure but clapped their collective hands when faculty, tenured or not, were fired for not paying union dues. Thanks to Janus that can no longer happen.

Unions claimed to support faculty tenure but clapped their collective hands when faculty, tenured or not, were fired for not paying union dues.

In pre-union days, faculty exerted their influence over academic affairs through academic senates that represented faculty as autonomous professionals, not as collective employees. They interacted with university administrations as cooperative partners, rather than as adversarial enemies.

The senates eschewed politics in favor of traditional academic concerns such as curricula. They supported academic freedom for all faculty, not just social justice warriors. They promulgated diversity of thought, not just diversity of skin color and body parts. They supported free speech, subject only to rules of civility, for speakers representing all sorts of ideas. Unlike faculty unions, they abhorred the heckler’s veto.

Perhaps the most salutary consequence of Janus in higher education will be the re-emergence of academic senates which understand and appreciate the difference between academics and politics. That process would be greatly facilitated if exclusive representation were tossed on the ash heap of history.

In the short run, Janus is likely to result in a swarm of union organizers invading faculty offices to recruit new dues payers. Since they can no longer rely on coercion for their money, they have to rely on persuasion. Unfortunately, unions have a well-deserved reputation for unfriendly persuasion. Skeptical faculty may suffer harassment, or worse, at the hands of desperate union organizers. The remedy for that is law enforcement. If administrators are emboldened by Janus to stand up to the bullies, peace can be sustained.

After Janus: Vindication and Hope