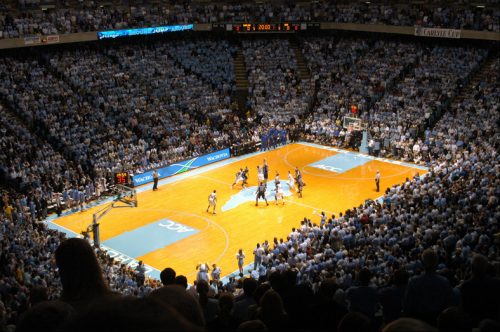 UNC-Chapel Hill’s infamous athletics-academic scandal has officially been swept under the rug. On October 13th, the NCAA’s Committee on Infractions announced that UNC-Chapel Hill will not be punished for the fraudulent classes it offered to 3,100 students, 47.6 percent of whom were athletes, for nearly two decades. This decision concludes Chapel Hill’s six-year saga of allegations, obfuscations, investigations, and public shame.

The university’s administrators not only appear relieved; they seem convinced that the NCAA made the right decision. In a university message, Chancellor Carol Folt wrote that the NCAA’s conclusion that UNC didn’t violate any NCAA bylaws was the “correct—and fair—outcome.”

Yet many others, including media commentators, educators, and sports fans, expressed dismay and disbelief at the NCAA’s failure to enforce academic accountability. A commentator from the Herald Sun, a North Carolina-based newspaper, argued that the NCAA failed in its disciplinary role due to a conflict of interest:

There’s a logical conflict in expecting NCAA members to self-police when their self-interest is at stake. Never-ending investments in expensive new sports facilities, and multimillion-dollar commitments to TV networks, sneaker companies and other corporate sponsors, ensure the importance of keeping the gravy train rolling merrily along.

How did UNC-Chapel Hill emerge unscathed from virtually the largest academic scandal in college sports history?

UNC was cleared of allegations because of a single technicality: The NCAA decided that the case was outside its jurisdiction because non-athletes were also enrolled in the fake classes.

But that technicality is irrelevant to the major issue at hand. When the NCAA initiated a three-year long investigation, the accusation it leveled against UNC was not that of academic fraud per se; rather, it was investigating whether or not the university administered special favors to student-athletes to help them earn good grades and maintain athletic eligibility. And there is a significant amount of evidence that suggests student-athletes were purposely funneled through the fraudulent courses at the heart of the investigation.

Not only were there a disproportionate number of athletes enrolled in those courses (nearly half of the 3,100 students enrolled were athletes), but the NCAA Infractions Committee even said that “it is more likely than not that student athletes received fraudulent credit…It is also more likely than not that UNC personnel used the courses to purposely obtain and maintain student athletes’ eligibility.” Nonetheless, the NCAA couldn’t prove that the courses were directly intended to bolster athletes’ GPAs because the academic “privileges” (easy A’s) were made available to both athletes and non-athletes. As Yahoo sports columnist Pat Forde put it, the Tar Heels “skate[d] on a technicality” and “exploited [a] loophole.”

Even worse, the situation reeks of collusion with the other governing body with the authority to sanction UNC. UNC’s regional accreditor, the Southern Association of Colleges and Schools, will take no action in response to the NCAA’s decision. The president of the organization said that “I have read the [NCAA’s] report and I find nothing in it to cause use [sic] to reopen the investigation.”

Such inaction in the face of blatant academic fraud points to a deeper problem in the governance of college athletics. If universities can so easily bypass NCAA rules, then there seems to be little guarantee that they won’t engage in similar activities in the future.

To be sure, UNC-Chapel Hill claims that it has taken great measures to ensure that such “academic irregularities” will not occur again. Indeed, the university has instituted more than 70 reforms for that very purpose, which are outlined on its website created in an effort for transparency. They may help in some ways; many of the reforms constitute increased levels of accountability and monitoring of academic advising and course content.

But these reforms will remain surface solutions if the university does not address the underlying systemic flaws that facilitated extensive academic dishonesty in the first place. Even after seven years under intense public scrutiny during which numerous ethical offenses were uncovered, UNC still has policies that permit and incentivize the athletics department to bypass academic standards.

For example, UNC allows its athletics department to administer academic “waivers” when admitting athletes into the university. In order to be admitted to an institution within the UNC system, students are required to meet a minimal high school GPA requirement of 2.5 and an SAT score of 880 on both the verbal and math sections (800 for the old version) or a score of 17 on the ACT. But those are just minimum requirements for the system as a whole—the average composite SAT score of students at UNC-Chapel Hill is 1370 and the average ACT score is 29.

It is difficult to imagine an athlete who fails to meet the system’s minimal standards keeping up academically in a course designed for Chapel Hill students. Yet, student athletes who do not meet any of the minimal requirements may still gain admission if the faculty Committee on Special Talent, the Office of Undergraduate Admissions, and the Chancellor approve the decision. That is despite the fact that the SAT’s publisher, the College Board, considers a composite SAT score of 1010 to be the minimum indication of college readiness.

Students who are admitted below academic standards are less likely to succeed in their studies—especially given the onerous amount of time they are expected to be training or on the field. The claim that student-athletes who are severely behind their academically talented peers when entering college can generally maintain eligibility with such additional demands on their schedule is laughable.

Unless of course, academic standards are dropped or unethical special treatment is given to athletes who struggle in the classroom. If that is the case, and it was at Chapel Hill, then the mission of the university has been severely compromised.

Furthermore, academic waivers are not the only university policy in conflict with academic integrity. There are also concerns that athletics scholarships pose incentives for schools to cheat. The athletic scholarship funds athletes’ full cost of attendance, including tuition, room, and board. Since eligibility for the scholarship is determined annually by the coach and is contingent on students’ performance on the field, the stakes are extremely high for athletes who must also maintain their academic eligibility. In such an environment, either academics or athletics will likely have to give. So the system finds ways around the regulations—with every level of supposed oversight looking the other way.

Furthermore, the funding for the athletic scholarships is heavily reliant on student subsidies (students at UNC-Chapel Hill in 2013, for example, paid $279 per year in student fees that go toward athletics). It is concerning that student money may be used for an activity that is not directed toward academic ends—and indeed, toward ends that may be used to undermine academic integrity.

UNC-Chapel Hill’s academic scandal is a dramatic (but real) example of the unsustainable balance between athletics and academics in college. The fact that the scandal occurred shouldn’t come as a surprise given the defective conditions that permitted the fraud to occur in the first place.

Indeed, the scandal is just a magnification of the smaller instances of academic dishonesty that are still present in many athletics departments. All universities have the responsibility to create an institutional framework that is directed toward academic ends. But, if a university such as UNC-Chapel Hill continues to have policies that are in direct conflict with maintaining high academic standards, then the university itself is complicit in the ensuing abuses that take place.

And, if the NCAA and the accrediting agencies continue to help sweep the corruption of their constituent institutions under the rug, then what is their purpose for existing?