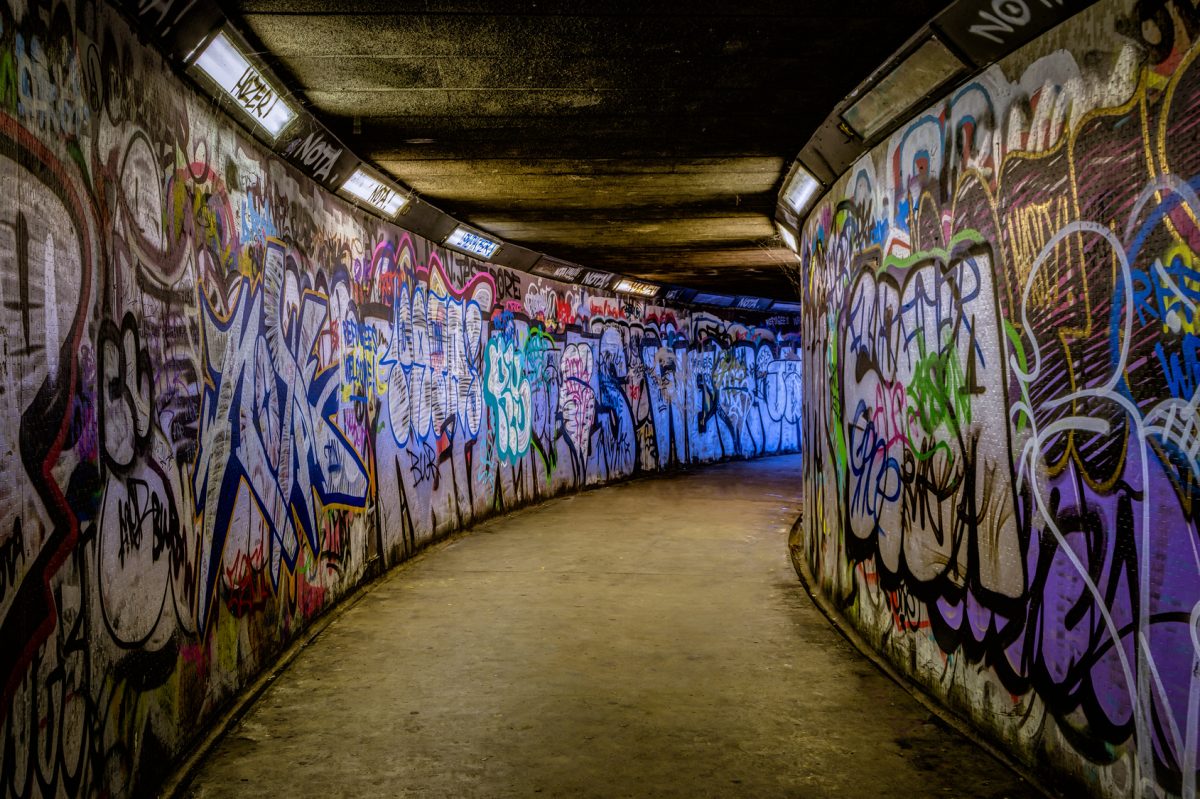 On my return to Georgetown’s campus this fall, I was greeted with the following broadcast e-mail message dated September 6:

We write to inform you of a recent report of a bias-related incident and to reiterate our commitment to diversity and civility as we commence the school year.

Last night, a swastika was found carved onto the interior of an elevator in one of our residence halls on campus, Village C West. If you have any information about this incident, please contact the Georgetown University Police Department (GUPD) at . . .

As a community, we condemn all acts of anti-Semitism, Islamophobia, racism, and any form of hate. These acts are antithetical to our values as a Catholic and Jesuit university and our commitment to be inclusive and welcoming to people of all faiths and racial and ethnic backgrounds. The Code of Student Conduct defines “bias-related conduct” as “language and/or behaviors which demonstrate bias against persons because of, but not limited to, others’ actual or perceived: color, disability, ethnicity, gender, gender identity and expression, national origin, race, religion, and/or sexual orientation.”

This incident, and last month’s violence in Charlottesville, remind us of the need to combat hate and harassment in all forms. Georgetown’s Bias Reporting System is a university initiative to improve the awareness of and response to acts of intolerance, bias, and hate.

If you observe an incident you believe to be motivated by bias or hate, you should file a report through the online Bias Related Incident Reporting form, or by calling GUPD at . . . Through the reporting system, the university is able to track and review bias-related incidents. Reporting the incident may lead to an investigation by members of the Bias Reporting Team, comprised of trained professionals in Student Affairs, the Office of Institutional Diversity, Equity and Affirmative Action, Campus Ministry, GUPD and other University offices.

As always, counseling and Campus Ministry staff members are available, and we encourage anyone who may be in need of these services to utilize them:

▪ To schedule an appointment with Counseling and Psychiatric Services (CAPS), students may call…

Acts of hate and intolerance have no place at Georgetown. The University is committed to investigating this incident of bias, and those found responsible for violations of university policy will be held accountable for their actions. It is our duty to report evidence of bias and to ensure Georgetown is an inclusive, welcoming community.

Upon reading this, I wondered: Is this the proper institutional response to such an event?

Perhaps I am not the right person to render a judgment on this question. I may have aged to a point at which I am incapable of seeing the world through the eyes of today’s youth. I can only say that from my perspective, the University’s response strikes me as an ill-advised and dangerous overreaction.

In 1966, Simon and Garfunkel released the album, Parsley, Sage, Rosemary and Thyme containing the song A Poem on the Underground Wall. It told the story of a man waiting to be alone in the subway in order to scrawl profanity across an advertisement, and the joy he realized from doing so. The song was darkly amusing because its pathetic but relatively harmless protagonist represented a perfectly familiar personality type.

We all know that some people get a thrill out of violating social norms. The thought of doing something against the rules that offends others give such people a feeling of pleasure. We know this because, for most of us, we had the same feeling at least once or twice during our teenage years.

Some of the people with this personality trait will indulge it when no one is looking. They will write or draw offensive words or images on surfaces that are open to public view. For such people, the pleasure arises from the violation of social norms–from the offensiveness of the action–not from the content of the message. The content is essentially irrelevant.

In 1966, the four-letter profanity that is the subject of A Poem on the Underground Wall was shocking to conventional sensibilities in a way it no longer is due to its common usage. Its present-day analog is the swastika or KKK symbol. But whether profanity or swastika, the motivation for defacing public property is the same; the pleasure the individual derives from transgressing one of society’s moral norms.

Now from the tunnel’s stony womb
The carriage rides to meet the groom
And opens wide and welcome doors
But he hesitates, then withdraws
Deeper in the shadows

There is little that we can do to eliminate this sort of behavior short of having 1984 style surveillance of all public spaces. There is much that we can do to increase the incidence of such behavior, however.

Instead of merely painting over the swastika, we can publicize its existence, greatly magnifying the number of people offended by it. We can invest the event with great significance, calling it a bias-related incident and condemning it as an act that is “antithetical to our values as a Catholic and Jesuit university and our commitment to be inclusive and welcoming to people of all faiths and racial and ethnic backgrounds.”

We can spread alarm by analogizing it to “last month’s violence in Charlottesville.” We can exaggerate its potential effect by suggesting that members of the University community may need counseling to deal with it.

We can do all the things that will increase the emotional payoff the perpetrator receives from his or her transgressive act, and make it more likely that he or she will seek to repeat it or others with the same personality trait will seek to copy it.

We can do all the things that make it unsurprising to receive an almost identical second broadcast e-mail from Georgetown’s administration dated September 7 informing us that:

Yesterday we wrote to inform you of a bias-related incident in one of the residence halls on campus. Today, we are disheartened to follow up our message with news of another incident in the LXR residence hall. Last night, two swastikas were found painted on the inside of an LXR Hall elevator.

And another on September 20 stating, “[e]arlier tonight, the Georgetown University Police Department (GUPD) responded to a report of a swastika found painted inside the stall of a women’s restroom in the LXR residence hall.”

But perhaps I am misunderstanding the purpose of the University’s e-mail. Perhaps it is not intended to actually address any underlying problem. Perhaps it is merely an exercise in virtue signalling.

Virtue signalling is defined as the conspicuous expression of moral values done primarily with the intent of enhancing one’s standing within a social group. Or more informally, it’s saying that “you love or hate something to show off what a virtuous person you are, instead of actually trying to fix the problem.”

Someone etched a swastika on an elevator wall. The University is using this occurrence as an opportunity to trumpet how strongly it condemns hatred, how committed it is to inclusiveness, how rigorous its Code of Student Conduct is, how accessible its Bias Reporting System and how professional its Bias Reporting Team is, how concerned with its students’ psychological well-being its Counseling and Psychiatric Services is, and generally how committed it is to all things good and noble. It is not clear how sending a broadcast e-mail to the entire University addresses the actual problem, but that does not seem to be the point of the exercise.

The point seems to be for the University to show off what a virtuous institution it is.

Virtue signalling would not be a problem if it were harmless. But in this case, it is not.

Had the University simply painted over the swastika and remained silent, the total harm done would have been that a small number of students would have been exposed to a hateful symbol.

Instead, by broadcasting the incident across campus in order to tout its virtue, the University multiplied the number of people offended, frightened, or dismayed by the event exponentially. Further, by continually sending similar messages whenever there are similar incidents (there have been at least six over the last six months, e.g., anti-Semitic graffiti in a public restroom, Muslim and Hindu flyers ripped off bulletin boards, a swastika in an elevator, a flyer for a non-existent Frito Bandito party), the University so magnifies the significance of each that one may get the impression that under the surface, Georgetown is seething with hatred and bigotry.

Although I originally regarded the University’s suggestion that students may be so traumatized by seeing a swastika that they might need psychological counseling as inappropriately patronizing, I can see how after receiving enough of these broadcast messages, some students could be rattled.

And his heart is laughing, screaming, pounding
The poem across the tracks rebounding
Shadowed by the exit light
His legs take their ascending flight
To seek the breast of darkness and be suckled by the night.

I recommend that those too young to have encountered A Poem on the Underground Wall find it online and listen to it. Besides hearing a beautiful and intriguing piece of music, they may also learn some useful lessons from it.

One is that people sometimes get a thrill out of secretly doing something “bad”–something they know to be prohibited or something they know will shock or offend others. Another is that such actions are not necessarily motivated by hatred and are usually not intended as and do not constitute threats.

With this insight, one might deduce that to treat such actions as threats or evidence of widespread bigotry is to invest them with a dignity and importance that they do not deserve, and worse, that by calling attention to them we merely gratify the perverse desire that motivated them in the first place.

So how about the next time someone etches a swastika in an elevator or writes a hateful or profane poem on a bathroom wall, we just quietly paint over it and go about our business?

The Contemporary Relevance of A Poem on the Underground Wall