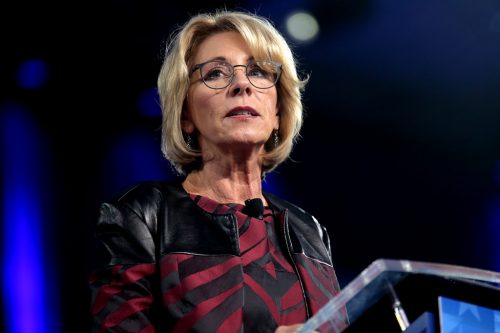 It is very rare for a federal agency to admit having made a mistake and rarer still for the secretary of a cabinet department to announce a U-turn in policy in a heavily publicized speech. But that is exactly what Secretary of Education Betsy DeVos did on September 7.

Speaking at George Mason University, Secretary DeVos went straight after the most contentious element of the Obama Administration’s higher education policy, namely its interpretation of Title IX of the Higher Education Amendments of 1972. The language of the statute was twisted by bureaucratic fiat (a “Dear Colleague” letter) from prohibiting discrimination based on sex into a crusade against any conduct by a school, a student, or a faculty member that might be deemed sexual harassment.

Under the Obama administration’s “guidance” (which was of very doubtful legality since requirements of the Administrative Procedure Act (APA) were ignored), colleges and universities were expected to adopt highly one-sided procedures for handling all allegations of sexual misconduct—procedures that were designed to produce the largest number of accusations and punishments possible.

In Secretary DeVos’ words, the Education Department “weaponized” Title IX and compliant college bureaucracies against anyone who was accused of anything from rape to merely speaking impolitely to women, as Professor J. Martin Rochester discussed in last week’s Martin Center Clarion Call. To comply with the Department’s orders, schools large and small hired many Title IX administrators who knew that they might be replaced if they didn’t get results, which is to say, finding male students guilty and seeing them punished.

In its politically motivated zeal to deal with the alleged “campus rape culture,” the Department went far beyond law and reason and Secretary DeVos is determined to restore fairness and the rule of law.

The procedures mandated by the Department’s “guidance” are so slanted that when members of Harvard’s law faculty got hold of them, they issued a letter that criticized them as “overwhelmingly stacked against the accused.” And when a judge looked at the procedures in a case where an expelled student sued, he sarcastically asked the lawyers defending the school, “When I finished reading all the briefs in this case, my comment was, ‘Where’s the kangaroo?’” (That case and many others are recounted in Professor KC Johnson’s recent article in Commentary.)

Among the disturbing features of the Department’s policies were: a very low standard for guilt (a mere “preponderance of the evidence”), a bar against allowing the accused to have legal representation, a mandate to investigate off-campus incidents rather than leaving them to police (which former Education Department lawyer Hans Bader points out here, was a reversal of prior policy and therefore required public notice and comment before changing), “training” for campus officials to ensure that they adopt a “believe the accuser” mindset, and rules against cross-examination of witnesses.

Procedures that our courts of law insist on to avoid prejudice and minimize the probability of finding innocent individuals guilty were tossed aside in a mere letter written by a political appointee.

Secretary DeVos was mindful of the purpose behind the OCR’s rules—to punish sexual predators on campus—but made the crucial point that the desire to punish the guilty does not justify using unfair and slipshod procedures that are apt to lead to punishing the innocent. “One person denied due process is too many,” she said. “Every survivor of sexual misconduct must be taken seriously. Every student accused of sexual misconduct must know that guilt is not predetermined. Due process protects everyone or it protects no one. The notion that a school must diminish due process rights to better serve the ‘victim’ only creates more victims.”

That’s exactly right. No doubt there are some sexual predators loose on our college campuses and they should be removed from school and punished. But it does not help to tamper with the scales of justice so that falsely accused individuals will be punished too. As Robert Shibley, Executive Director of FIRE, stated, the Education Department “sent the message that due process is an impediment to justice, ignoring repeated and painful historical lessons to the contrary.”

Nevertheless, critics immediately pounced, claiming that if the Department changes its policies, the result will be to retreat in the face of the supposed epidemic of sexual assault. For example, former Vice President Joe Biden opposed the Secretary’s initiative, declaring, “Any change that weakens Title IX will be devastating.”

Of course, that’s political hyperbole. The laws against rape and assault remain in place and will be enforced as strongly as ever, just not with ludicrously unbalanced procedures pursued by school administrators with a stake in the outcome.

By itself, Secretary DeVos’ criticism does not, however, bring about legal change. Some commentators noticed that her speech didn’t explicitly declare that the Department was rescinding the April, 2011 “guidance” letter that is the center of this tumor. Could that mean that she was merely throwing a rhetorical bone to the opponents of the “weaponizing” of Title IX?

Apparently not. As Frederick Hess and Grant Addison of the American Enterprise Institute wrote a day after the speech, “While the education press reported that DeVos was, for now, leaving the 2011 Obama guidance intact, a senior Department of Education official told us that this is misleading. Rather, the official says that the department has already filed paperwork with the Office of Management and Budget to rescind the guidance and adopt new interim guidance in its place.”

DeVos made it clear that she intends to follow the law instead of continuing the Obama administration’s method of, as she put it, “rule by letter.” In other words, the Education Department will abide by the APA and allow public comment before implementing new rules. But what should those new rules look like?

Ideally, the new rules would remove support for much of what now occurs under the Obama Title IX regime. First, they should make it clear that Title IX is not about speech and that enforcement actions against students or professors for saying or writing things that bother feminist militants is not sanctioned by federal regulation.

Second, they should specify the minimum in acceptable procedures if and when schools decide to investigate allegations of sexual assault themselves. In that regard, it is especially important to require that the accused be accorded the rights to representation, to know of the precise charges and evidence against him, and to cross-examine witnesses. Furthermore, the school administrators involved in decision-making should be neutral, not people who have been trained to believe that the accused are presumptively guilty.

And the Department should indicate that if schools retain the current, biased procedures that many of them adopted (often justified by the claim that the Department required them), they will find themselves facing federal scrutiny and possible sanctions. It will require such counter-pressure to roll back the growth of aggressive Title IX bureaucracies staffed with people who are itching to foment complaints and decree punishments.

That’s what the National Association of Scholars was driving at in its response to the DeVos speech: “In almost every college, six years of pressure under ‘Dear Colleague’ letters has embedded bureaucracies devoted to the unjust systems Secretary DeVos is now attempting to root out.” Schools won’t root them out unless officials fear that their continuance will bring down the wrath of federal officials, just as fear of federal officials under the Obama administration induced them to set up their kangaroo courts in the first place.

Not since Bill Bennett explained that increased federal subsidies led to tuition increases has a secretary of education said something as sensible as Betsy DeVos did last week.