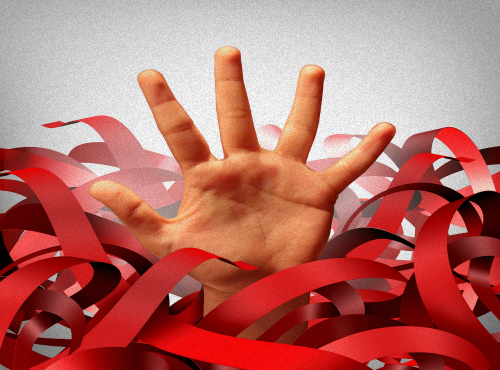 Most people working within the halls of academia are at least somewhat familiar with the excesses having to do with infringement of due process, free speech, and basic rights under the current Title IX regime. The cases that have made headlines and filled books have mainly involved male students who have been falsely accused.

But I too have felt the sting of a Title IX accusation.

What follows is a short account of my amazing experiences as a Title IX target of investigation at the University of Missouri-St. Louis. I say amazing because, as I discovered, it no longer is clear in many instances who is the sexual harasser as opposed to the sexual harassee.

My problems can be traced to the April 2011 “Dear Colleague” letter of “guidance” issued by the Office for Civil Rights of the Obama Department of Education. It sought to expand Title IX, the federal statute designed to address gender discrimination and funding for women’s sports, to cover areas well outside the original intent of the legislation.

Drafted at a time of concern over the perceived growth of a “campus rape culture,” the letter contained seamless references to sexual violence, sexual harassment, sexual discrimination, and all things sexual. In particular, as stated in footnote 2, “Use of the term ‘sexual harassment’ throughout this document includes sexual violence unless otherwise noted [italics mine].” The document extended the definition to include “verbal conduct” that “creates a hostile environment by being sufficiently severe or pervasive and objectively offensive” that it “interferes with or limits” one’s “ability to participate in or benefit from educational programs and activities.”

The letter was mainly aimed at incidents involving student-on-student sexual assault, but its sweepingly vague language invited constraints on speech itself, including, as in my case, even the sort of heated exchanges that are not uncommon in the professoriate.

Under the current Title IX regime, faculty can see their reputations put at risk over charges of “sexual harassment” for simply engaging in professional disagreements, the critical variable being if the contending voices happen to be of different genders and the male colleague’s decibel level is interpreted as excessive.

When one can so cavalierly be accused of conduct associated with the likes of Bill Cosby and Bill O’Reilly, something is amiss in the university.

In my case, I received a three-sentence email from the UM-St. Louis deputy Title IX coordinator on August 23, 2016, informing me that “a complaint has been filed with the Office of Equal Opportunity and Diversity which [sic] you as the accused.” It indicated that an investigation of the allegations was underway and that they needed to meet with me “to discuss the concerns.”

I assumed that what triggered the complaint was a couple of email exchanges several months earlier between me and two female members of the political science department. Some rather nasty words were exchanged, starting with my castigating one female colleague for her persistent use of email to criticize our department chairperson, followed by another female colleague coming to her defense by attacking me out of the blue as a serial sexual harasser. That was followed in turn by my using admittedly uncivil language in reciprocating the hostility she had just demonstrated toward me.

At no time did I use derogatory language of a sexual nature or raise any issues relating to gender, other than to note that during almost a half century of teaching and research at UMSL I had interacted with literally thousands of female faculty, students, administrators, and staff without incident.

While I thought that the email volley was the trigger, I could not be certain, since I was never informed in writing exactly what the charge was and who was bringing it. Such basic due process elements are not required in Title IX cases.

When I met with the Title IX staff on September 1, I was told the general nature of the complaint and given an opportunity to respond. That remained the extent of my interaction with the Title IX bureaucracy over the course of an entire year in which the sexual harassment charge was hanging over my head.

I was never allowed to confront my accusers. To call the Title IX investigatory process nontransparent is to put it mildly. At great expense in time and effort, I compiled endless paper trails and numerous documents as evidence of my nonsexism, submitting these with an offer to submit more if needed, along with a dozen names of prominent first-hand witnesses who could testify on my behalf, including the former chairpersons of my department, three of whom were women.

Months went by with few of these people being contacted, and with zero communication from the Title IX folks regarding the status of the investigation. The wheels of justice can grind very slowly in Title IX matters.

It turns out that the case had reached closure in May 2017, but I had never been informed of the outcome. Only on the first day of the fall 2017 semester, August 21, did I receive an email from the Title IX Coordinator reporting that a meeting had been held with the provost to discuss the case and the case had been “closed.” The accuser had been notified of the meeting and outcome in the spring, but I had not.

On the one hand, I was appreciative of the Title IX coordinator’s apology for failing to keep me in the loop and, most especially, the decision that seemed to clear my name, presumably for lack of evidence. However, I never did get any specifics regarding the final report.

I bear no ill will toward the Title IX staffers since they are merely creatures of the system that the Obama Administration created. This case was never about gender. The email exchanges I have described reflected an underlying toxic environment pitting competing personalities and factions in the political science department that had been simmering for a long time, a condition well-known by the university administration.

Title IX has become a handy vehicle for one professor or a faction to vent and press grievances over perceived inequities having to do with governance and other issues. I have offered apologies over whatever role I have played in contributing to departmental tensions, including uttering uncivil remarks in the heat of the moment. I am still waiting for an apology from the other side for leveling unfounded charges against me.

Meanwhile, Title IX, which has a legitimate and important role to play in addressing gender-related problems, needs to be reexamined and retooled if it is to serve that purpose.

I was left with an unanswered question: is it possible any longer in the current climate for one professor to have words with another professor of the opposite sex without it constituting “sexual harassment” or at least triggering a sexual harassment investigation? Free speech, academic freedom, due process, and just plain common sense are at stake here.