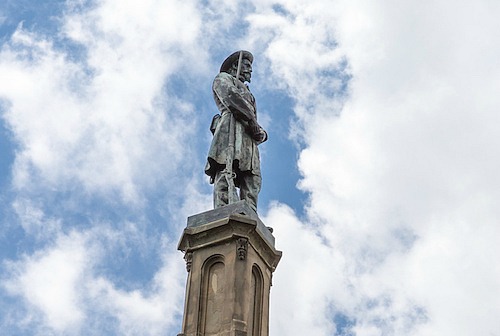 It’s been more than two weeks since white nationalists gathered in Charlottesville, Virginia, to march against the removal of a Robert E. Lee statue and chant racist slogans.

Social media captured the ensuing chaos and violence in real-time: a white nationalist terrorist rammed his car into a crowd of counter-protestors, killing one woman and injuring many others, and two state police officers died in a helicopter crash.

Since then, heated debates have arisen over free speech (and “hate speech”) and the growing problem of political violence. But the most contentious debate has involved the question whether to keep or raze historical monuments to the Confederacy.

In the aftermath of the Charlottesville tragedy, more than twenty monuments were removed from college and public grounds, with many others pending removal.

In North Carolina, Duke University president Vincent E. Price had a statue of Robert E. Lee removed from Duke Chapel. Another Confederate statue in Durham was toppled over by a group of protesters; after a NC Central University student was arrested for vandalism, some of her professors praised her and suggested awarding her a scholarship.

And last Tuesday, nearly 800 protestors gathered around UNC-Chapel Hill’s “Silent Sam” monument, which was erected over a hundred years ago in honor of students who fought in the Confederacy. Three people were arrested during the protest.

Clearly, there is a widespread sense of urgency surrounding the removal of these monuments. What is not clear, however, is whether this rush to take down statues is motivated by reasonable arguments or charged emotions.

For many, the primary argument for taking down the statues is that they celebrate the Confederacy and, therefore, celebrate the slavery and racism it stood for.

For instance, North Carolina Governor Roy Cooper said in a recent statement, “[We] cannot continue to glorify a war against the United States of America fought in the defense of slavery. These monuments should come down.”

However, many are concerned that this rationale will eventually justify the removal of other monuments, such as those of Thomas Jefferson and George Washington, who both owned slaves and saw black people as inferior.

Some have responded by arguing that there is a clear distinction between memorials honoring Confederate soldiers, who actively fought to defend slavery, and those like Washington and Jefferson, who owned slaves.

For instance, in a recent article on the Public Discourse, Matthew J. Franck, a visiting lecturer in politics at Princeton University, contrasts Confederate general Robert E. Lee with figures like Thomas Jefferson, arguing that there is a clear moral distinction.

Franck says that Lee’s mission was centered on upholding human bondage, whereas Jefferson’s mission was the advancement of human freedom. This is demonstrated in Jefferson’s authorship of the Declaration of Independence, as well as his personal disapproval of slavery, despite the fact that he was a slaveholder.

But some say the history is not as simple as Franck suggests, arguing that Lee felt compelled to fight for the Confederacy because he could not bring himself to take up arms against Virginia, his home state. Still others point out that Lee saw slavery as “a moral and political evil.”

Whether or not one finds this response compelling, the point is that judging the complexities of Lee’s character involves delicate historical analysis. One cannot assume that all monuments associated with the Confederacy must be torn down without looking closely at the individuals they depict; case-by-case analysis is necessary.

But all of these distinctions seem to be lost in the frenzy to tear down these statues. In fact, many protestors now are demanding the removal of statues not only based on whether they are associated with slavery, but also on whether they “glorify” racism.

This has become evident in recent vandalism of non-Confederate statues. For example, a bust of Lincoln was found burned in Chicago. Also, the Lincoln Memorial in Washington, D.C., was spray-painted with obscenities.

Other recently vandalized monuments include a statue of Joan of Arc in New Orleans, a 200-year-old Christopher Columbus monument in Baltimore, and a statue of Spanish priest Junipero Serra in California.

Also, the mayor of New York City, Bill de Blasio, may decide to remove a statue of Christopher Columbus from Manhattan’s Columbus Circle. All of these figures obviously have nothing to do with the cause of the Confederacy.

At any rate, those who want Confederate statues removed can indeed make a strong argument that many monuments were erected during the Jim Crow era in order to send an intimidating message to black people.

A timeline of the genesis of the Confederate sites shows two notable spikes. One comes around the turn of the 20th century, just after Plessy v. Ferguson, and just as many Southern states were establishing repressive race laws. The second runs from the mid-1950s to the mid-1960s—the peak of the civil-rights movement. In other words, the erection of Confederate monuments has been a way to perform cultural resistance to black equality.

Consider, for instance, UNC Chapel Hill’s “Silent Sam” monument, which was dedicated in 1913. During the dedication speech, Confederate veteran Julian Carr boasted about how he publicly whipped a black woman. He also emphasized that the Confederacy fought for the cause of preserving the “Anglo-Saxon” race.

But even with the monument’s dark history, there is still room for caution. After all, some argue that it is precisely because it was put up during such a tumultuous time that it holds unique historical value.

According to a recent NPR/PBS NewsHour/Marist University poll, 86 percent of Americans “disagree with the white supremacy movement” and 94 percent “disagree with the views of the KKK.” And yet, 62 percent think that the Confederate statues should remain in place “as historical symbols.”

So far, however, these considerations have been ignored. The debate has primarily been resolved by outbursts of vandalism and lawlessness. And last Monday, Governor Roy Cooper gave express permission to UNC-Chapel Hill officials to immediately remove the Silent Sam statue, without first consulting with the UNC system’s Board of Governors and despite current laws that explicitly prohibit this.

These decisions ought to be determined more democratically and reflect broad consensus—not just that of loud protestors. And going forward, university and public officials should take more time to consider the implications of removing Confederate monuments.

Based on the fuzzy logic of protestors, it is unclear how removing statues of Robert E. Lee will not also lead to the removal of statues of Thomas Jefferson, George Washington, and others. After all, they have ties to slavery and are equally morally complex.

Unfortunately, that sentiment has become popular in recent weeks. As Angela Rye, a prominent CNN commentator, said, “I don’t care if it’s a George Washington statue or a Thomas Jefferson statue or a Robert E. Lee statue. They all need to come down.”

Let’s hope that, in the coming days and weeks, higher education leaders and public officials approach these issues with more deliberation.

Did You Know? The UNC BOG Nominations Process