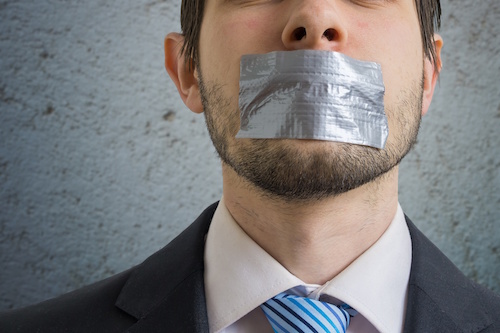 Since launching its Stand Up for Free Speech project in 2014, the Foundation for Individual Rights in Education (FIRE) has had a great deal of success in defeating college officials when they interfere with the free speech of students. But you can’t win them all, and a recent decision went against FIRE and the students it represented.

Ironically, this free speech case arose when a number of students at the University of South Carolina (USC) affiliated with the campus chapters of Young Americans for Liberty and College Libertarians hosted an event in November 2015 whose very theme was the threats to free speech on American college campuses. And the students played by the university’s rules, obtaining prior approval from USC’s director of campus life for the posters it planned to display to illustrate the problem of censorship.

But, given the hyper-sensitivity of some college students, complaints about the event were almost inevitable. Three students filed formal complaints of discrimination afterward. One alleged that the students running the event were rude and made racist statements. (These days, of course, the claim of “racism” is so readily used that it often means nothing more than disagreement with a position taken by a “progressive” student.) Another griped about the use of the term “wetback” (which was quoted in the context of a case) and the third maintained that a friend had been “violently triggered” by seeing a swastika and now “feels unsafe” on campus. (“Unbelievable” is an overused word, but it applies there.)

It should have been obvious that the three complaints, one of which whined that the students behind the event “wanted to use university resources and space to post offensive symbols and racial slurs,” completely missed the point of the free speech display. They were so far-fetched that one has to suspect that they were made merely to cause trouble for the two student groups.

A few days after the event, student Ross Abbott (president of USC College Libertarians), who had helped organize it, received an official notice of charge letter from the university’s office of equal opportunity programs. It informed him that he had ten days to schedule an appointment with assistant director Carl Wells to discuss the charges against him, and furthermore that he was not allowed to talk about the matter with any member of the faculty or student body. Abbott was also warned in the letter that he could face sanctions (ranging from mandatory “awareness” training up to expulsion) if the case should be sent on to the office of student conduct.

All of that was quite intimidating, perhaps intended to soften Abbott up for, as the letter put it, “mediation to resolve the complaints.”

Abbott was of no mind to cave in to the university’s thought police. He duly made the required appointment with Wells, and presented him with a letter of his own, stating that he would not agree to any “mediation” since he had done nothing wrong. During the meeting with Wells, he had to answer each of the complaints about the posters—which again had already been approved by another USC official as non-discriminatory—and strongly did so.

Evidently, Abbott did a good job of standing his ground. On December 23, 2015, he received another letter from Wells, notifying him that the university would take no further action against him over the complaints regarding his free speech on campus event.

Even though the USC system had let Abbott off the hook, its high-handed rules were still an affront to the First Amendment’s free speech values. Therefore, Abbott filed suit in February 2016 to challenge the school’s vague, overly broad policies. His complaint argued that those policies give school officials “unbridled discretion to review and restrict student speech.”

The case was heard by federal district judge Margaret Seymour, a Clinton appointee. Her July 7 ruling in Abbott v. Pastides was a setback for free speech on college campuses. Judge Seymour held that USC’s policies were constitutionally acceptable as “a narrow approach to addressing the rights of students on campus: those who participated in the event and those who felt discriminated by it.”

That decision makes hash out of the First Amendment. Its protection of free speech does not call for any “balancing” of the right to speak against the supposed right not to feel “triggered” or “discriminated.” Speech on the USC campus is not free when students can be brought up on official charges, hit with a gag order, and threatened with punishment if they should fail to appear before school administrators—simply because another student files a complaint over speech he or she didn’t like.

FIRE’s Executive Director (and Martin Center Board member) Robert Shibley responded to the Abbott decision, saying that the opinion “kneecaps free speech by giving campus bureaucrats extraordinary latitude to browbeat dissenters into keeping their mouths shut.” And the attorney who handled the case for the students, Robert Corn-Revere, states that the decision is “plainly contrary to well-established First Amendment principles and will be overturned on appeal.”

The next stop will be the Fourth Circuit Court of Appeals. We will find out if Mr. Corn-Revere’s optimism is correct. Until then, USC students had better be prepared for mandatory “discussion” sessions with university officials if they should say something that provokes anyone to complain.